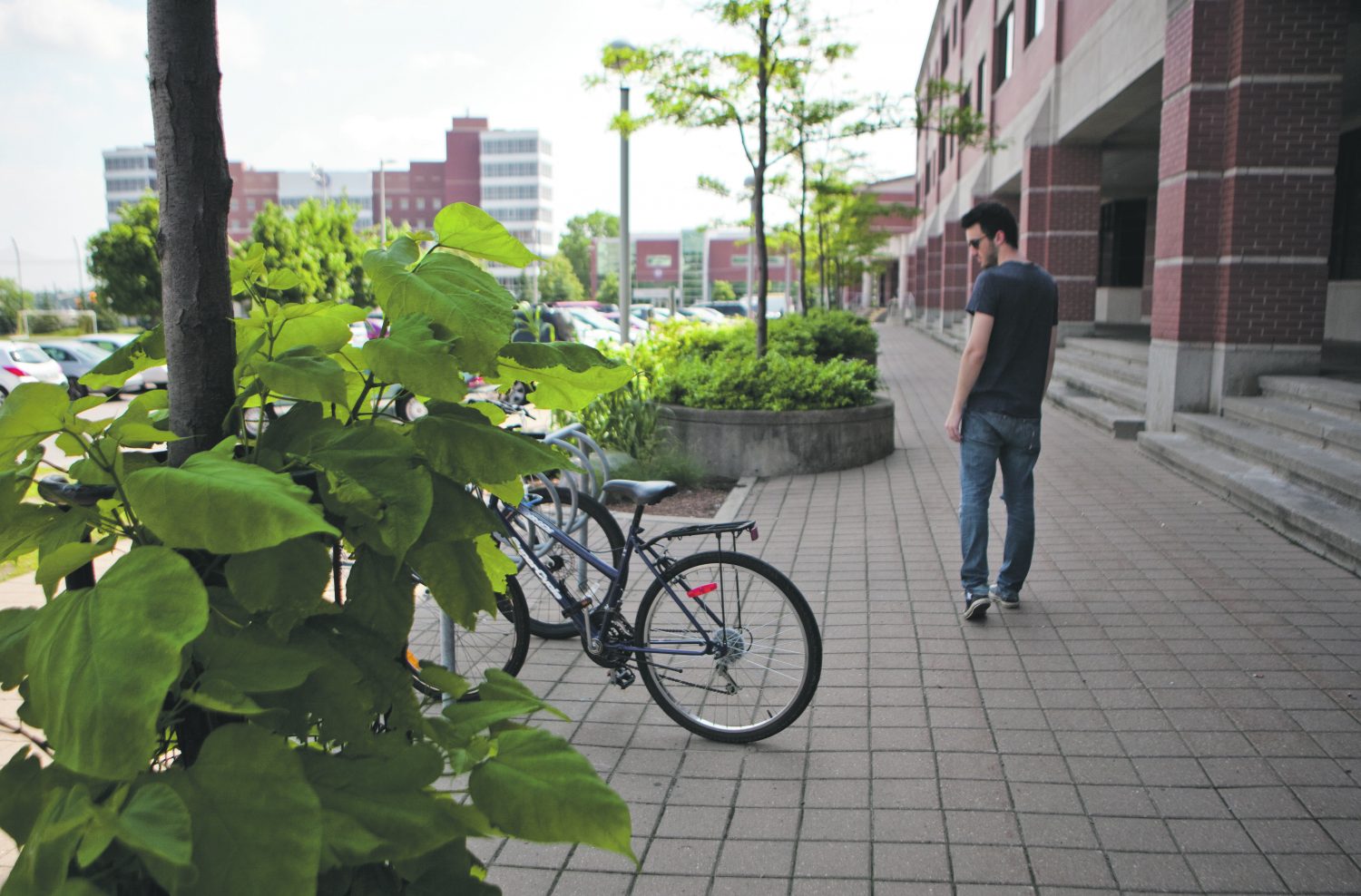 WRPS officials have warned the public that with cycling weather comes an increase in bike thefts. • Heather Davidson PHOTOGRAPHY MANAGER

Frank Szado was ordering a gelato at Vincenzo’s in Uptown Waterloo when his $6300 bike, which was inside the store at time, was stolen. His eyes were only off of it for about two minutes.

“I guess you don’t expect it. [But] it happens. I left it out of my sight; I didn’t have my lock that day, but I did bring it into the store,” said the Waterloo resident of only three years, a couple weeks after his bike was stolen on May 27.

He reported it stolen to the Waterloo Regional Police Services (WRPS), put up signs and posted a Kijiji ad online asking for his bike back. The postings and signs have a photo of the thief from a security camera at Vincenzo’s.

But he hasn’t got his bike back.

“This was my dream bike that was stolen,” Szado continued. “I was gambling on the fact that no one was going to taking it. My initial thought was that management had moved it.”

The North Division of WRPS — a division that monitors parts of student residences near Wilfrid Laurier University — has recently launched a project on bike theft in the community. According to their initial investigations, the months of April and May saw a 15 per cent increase in the number of bike theft reports compared to the same months in 2012.

“You’re going to see an increase [in thefts] because more people are out — it’s cycling season,” explained Olaf Heinzel, the public affairs coordinator for WRPS. “It’s same with any property crime. If it’s valuable to you as the owner, it potentially has value to someone else.”

He added, “If more and more people are investing in higher-end bikes, there are people out there who will recognize that and see the opportunity to turn that into cash.”

WRPS currently doesn’t keep a database of registered bicycles because of the high turnover rate of bikes. Friends sell them to other friends or lend them out to other people very frequently.

While the police are currently investigating Szado’s stolen bicycle — they now know the identity of thief — he also claimed there is a “bike theft ring” that exists in Waterloo Region. Heinzel, however, said he is unaware of any ring.

“I don’t know anything about a theft ring. The only ones that I’m aware of were crimes of opportunity for individuals who saw a bike and decided to run with it,” Heinzel said. “That doesn’t suggest that several bikes were taken by the same individual, but I’m not aware of a ring so to speak.”

People who frequent the universities on bike are also at risk of theft. Both Special Constable Services (SCS) at Laurier and the University of Waterloo (UW) campus police noted that bike theft occurs regularly on each campus.

Director of police services at UW Dan Anderson stated that “one to three bikes a day” are stolen from the UW campus, and that many others are recovered each week. Chris Hancocks, the operations manager at SCS Laurier, reiterated the same thing.

“They steal them from our campus and then go into the region somewhere and they start chopping them up or selling them,” said Hancocks. “It’s a constant problem through the summer.”

While he was not on campus when his roommate’s bike — which was shared with everyone in his house — was stolen, Matt Guido, a fourth-year business student at Laurier thought he and his housemates were being proactive by locking their bike to a fence behind their building on Ezra as opposed to in front of it on the bike racks.

“There was actually a bike rack at the front of the building with five bikes, but we thought it was a bit open,” Guido explained. “We just kind of hid it away from the open area.”

Unfortunately, on one evening in late May, the bike’s lock was cut and the bike was stolen. “I came back and lock was on the ground, snipped. The other bikes on the bike rack were actually still there. This one was gone,” he added.

While the students did not report the bike stolen, Guido has since loaned a bike from his friend, but now he stores it in his apartment.

Heinzel, Hancocks and Anderson all reiterated the same point when talking about ways to avoid theft: lock up the bike. But since a lot of bike locks are made of easily cut material, they all noted that buying a better quality lock might be more effective at deterring thieves.

“We’re see an awful a lot of the lower end locks being cut,” said Anderson. “I would really recommend buying a quality lock for the bikes, especially if your bike is worth a substantial amount of money.”

Heinzel noted that it would be helpful for WRPS if those who buy a bike to take photos of it, to keep receipts and to write down the serial number. It makes it easier for the WRPS to locate the bike in the situation of a theft.

“If you got a valuable bike, you’ve got to lock it, there’s no question about it,” Szado said. “[But] sometimes I don’t think it really matters, from what I see. If someone wants to get your bike, they can. They just cut the locks.”