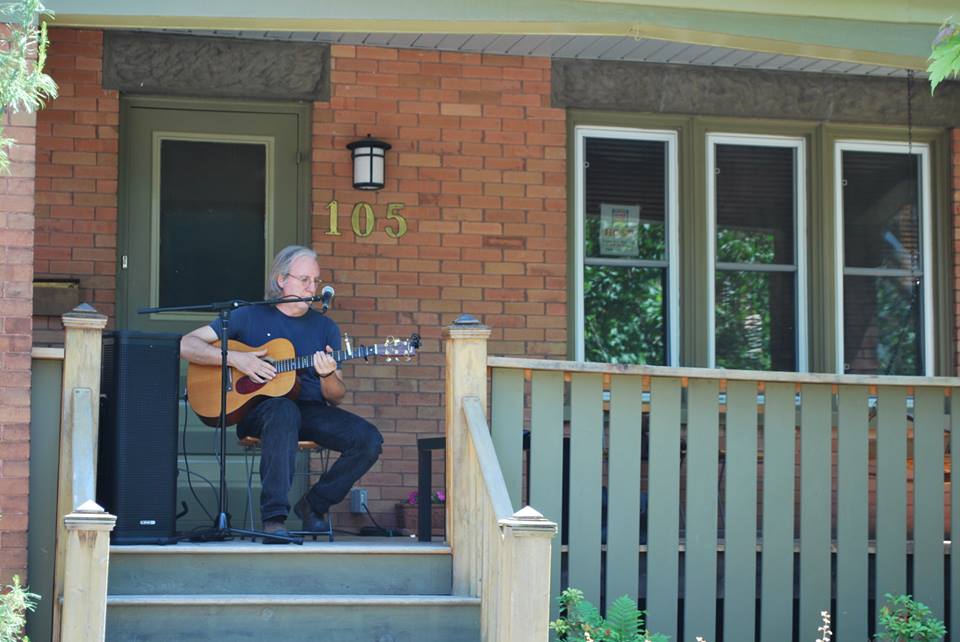 The Beauty of Porches

Take a walk through the neighborhood behind the Waterloo Town Square and you will find quiet streets with well-kept homes and nice porches. Take that walk on Sunday, June 8 and you will find 20 of those porches turned into live music venues featuring a smorgasbord of local and regional musicians.

This description, of course, is of the fourth-in-series Grand Porch Party, one of the most imaginative musical happenings in the area and brainchild of recently arrived Aussie,,Tenille Bonoguore.

“I was inspired by my brother-in-law (noted guitarist Michael Reinhart) who practices at our home when he visits. Since it was the first time I lived in a house with a porch, I thought that might be a pretty cool use for it. Then I thought ‘What if there were musicians on all of the porches?’ I was also inspired by the Frederick Street Art Walk and the concept of turning a neighborhood into a space for culture,” explained Bonoguore.

So, within months of moving to Kitchener-Waterloo, Bonoguore found herself knocking on doors with the crazy idea of transforming her neighborhood into a venue.

“I had never organized anything before so it was a bit of a challenge. Actually, there was a bit of resistance, but I think my Australian accent helped.”

After months of networking, hanging posters, cajoling and even pestering, Bonoguore cobbled together the first Grand Porch Party in June 2011. Twenty porches rang out with music that day and the event was deemed a smashing success.

“The response was overwhelming. Neighbors sent me notes and flowers. Strangers stopped by to thank me. Everyone wanted it to happen again,” Bonoguore said.

Since 2011 the Grand Porch Party has matured. The musicians now get paid, thanks to long-term sponsors such as Words Worth Books, Insight Eyecare and Tamarack Institute, and new sponsors like the Waterloo Juice Cartel.

There is also a tent for musician merchandise, a music garden for kids, a porch for sponsors and a porch dedicated to creating awareness for environmental issues.

This year there were even more musicians wanting to perform than there were porches for them to play on. “Although it is hard to turn down musicians, we want to keep this event scaled to the neighborhood,” Bonoguore said. That means one or two performances on each of the 20 porches.

Social media and word of mouth are the keys to the success of the Grand Porch Party and act as tools for sourcing musicians and informing fans about the street-side tunes.

Getting an event like this off the ground year after year is a lot of work, so what keeps Bonoguore at the helm? “When I see people enjoying the music…they may be young or elderly, from the neighborhood or not, it doesn’t matter…that enjoyment makes it all worthwhile.”

Kitchener-Waterloo is fortunate that Bonoguore acted on her inspiration and saw a simple porch as a gateway to culture and community.

Visit grandporchparty.wordpress.com for information about the artists and sponsors and even a gallery of images from the volunteer staff photographer.