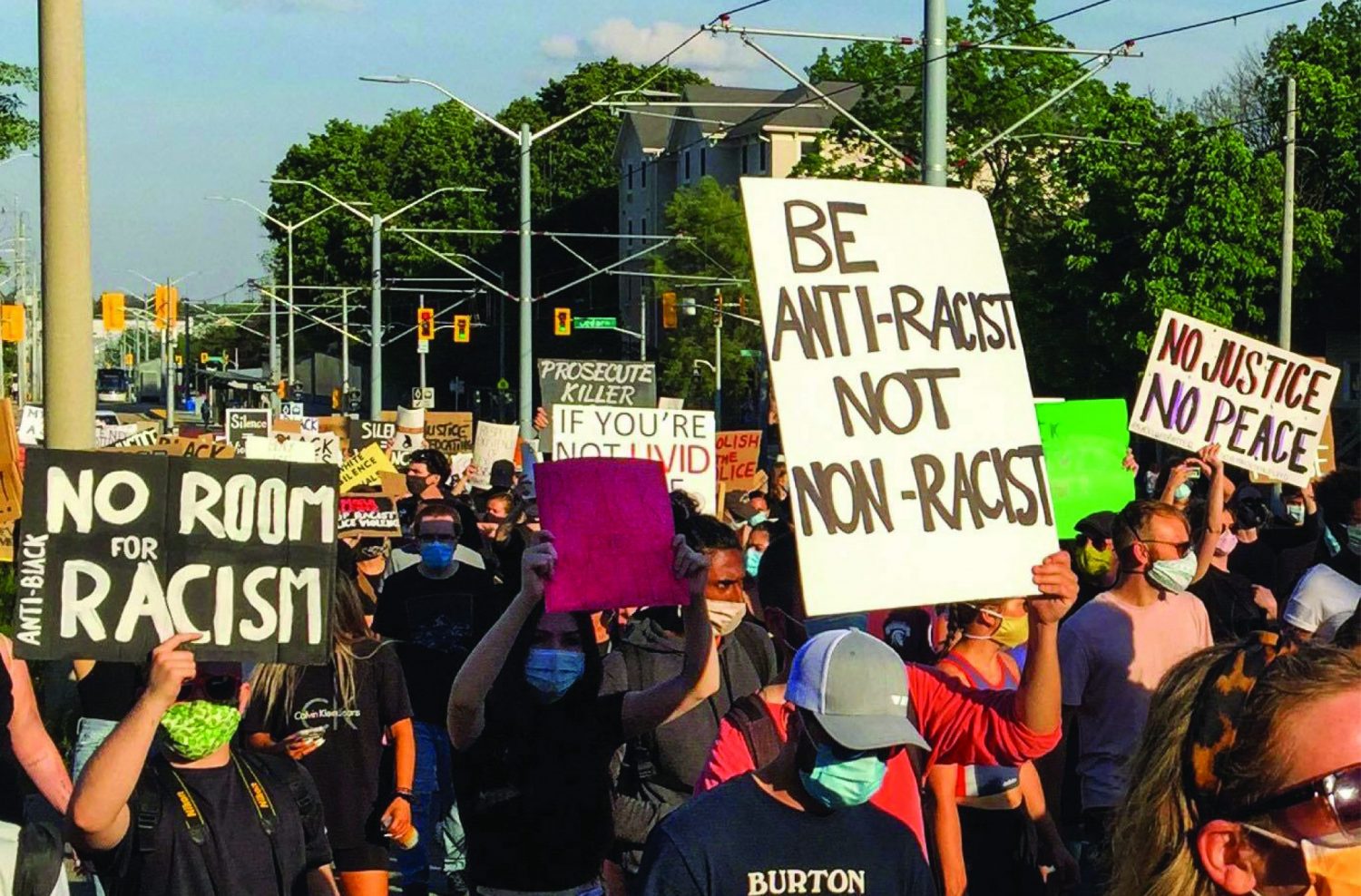 On June 3, an estimated 36,000 people gathered in downtown Kitchener for the KW Solidarity March for Black Lives Matter to peacefully protest against police brutality and racial injustice. Additionally, almost 5,000 people watched the march online via the live stream on the Black Lives Matter – Waterloo Region’s Facebook page. The video has been viewed over 100,000 times.

Three of the organizers, Selam Debs, Carla Beharry, and Aaron Francis have since launched a new Facebook group: The Anti-Racism Community Collective.

The group describes anti-racism as “the active process of identifying and eliminating racism by changing systems, organizational structures, policies and practices and attitudes, so that power is redistributed and shared equitably.” Their goal is to provide a platform to share resources for BIPOC and to amplify voices of the BIPOC community — as well as to provide anti-racism education, tangible action steps to support anti-racism initiatives and learning tools for allies in a community of like-minded people.

The group’s creators Selam Debs, Carla Beharry and Aaron Francis have been doing this work in the community for years through various platforms. They hope to continue building awareness and taking action towards tangible change by creating a thriving community and space for those passionate and committed to anti-racism work with this new group.

Standing in solidarity for Black Lives Matter at the march was a phenomenal show of support, according to the organizers. Yet in order for things to shift at a real systemic level, they said we will need the collective voices of the people to take action by sending a letter to city councillors, the Waterloo Regional Chair Karen Redman, MPPs, MPs and school board trustees about these issues.

The calls to Action from the Black Lives Matter Waterloo Region Solidarity March include, defunding the Waterloo Regional Police Service budget and ending the School Resource Officer program and the Community Outreach Program. Instead, the group suggests investing the budget in community-led health and safety initiatives.

The Anti-Racism Community Collective also wants to highlight that they are simply continuing the important work elders and leaders in the community have done in this Region for the past 50 years and amplifying it.

“There’s a lot of people in the BIPOC community who are doing this work right now in this time of collective mourning about all the Black lives that have been lost.”

“We encourage people to do their own research in order to learn about what these demands are, rather than put a heavy weight on people who are on the ground doing the work,” Beharry said.

The Anti-Racism Community Collective emphasizes that we need to start addressing systemic problems in our own community. They are calling for businesses in the Region to step up and for white-owned businesses to vocalize their Black Lives Matter support to their white clientele to show that they are actively fighting anti-Black racism and working to make their establishments a safe place for Black and Brown bodies.

Beharry said that for People of Colour, going into those establishments is challenging.

“It’s hard. It takes a lot of emotional energy to enter a new space and continually survey the room to determine if you are safe, if you are welcome — if the environment is going to be a respectable one for you and for your children and for your families,” she said.

Beharry outlined specific actions local business owners can take to create change if you own a store in KW.

“How many Black or Brown employees have you hired? That’s the first step. How many People of Colour are you employing? When you see a Black man walk into your store are you surveilling him more than you are surveilling a white, blonde woman who comes into your store? Why is that? That’s unconscious bias right there.”

Debs, Beharry, Francis and other community leaders are working to educate people as to why this shift needs to happen, but they say the first step is educating yourself without centering white voices.

“Not doing the work maintains the systemic structures of white superiority and white supremacy,” according to their Instagram page.

Beharry says it’s important for white allies to educate themselves before engaging in conversation, as the Black and Brown people on the ground doing the work can’t also be a primary source for education. With that in mind, The Anti-Racism Community Collective has created a Facebook post, outlining the first steps you can take to educate yourself. It includes a reading list of books that are “powerful tools to begin the path of anti-racism and anti-oppression awareness.”

“Really wrap your mind around what is being spoken about right now and to understand and start to unravel what your own unconscious biases are.”