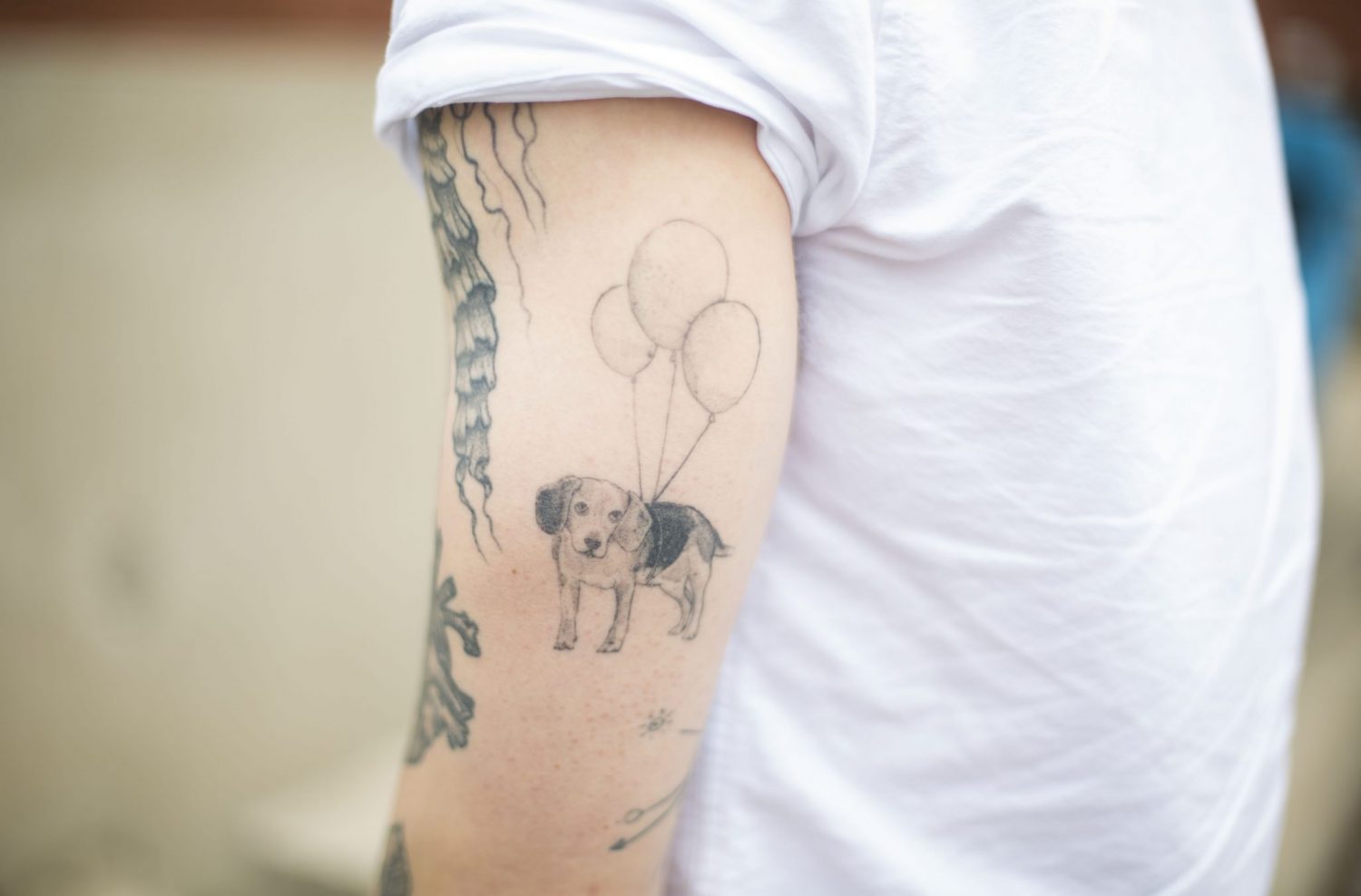 Tattoos: The Democratic Collection Of Art

The proliferation of tattoos has ushered in a new era of art collection. Tattoos differ vastly from traditional forms of artwork like painting, photography and sculpture, but transcend what is often a pretentious and unapproachable inner circle, skirting the elitism and serving to introduce the average person to the world of art.

I’ll admit, I look forward to getting tattooed about as much as I look forward to seeing a proctologist. Yet the pros outweigh the cons every time. There’s an almost mystical allure in the personal sacrifice and connection with a tattoo not found in other forms of art collection.

From the gooey slice of pizza to a fine-line rendering of a late relative, tattoos are personal to the collector to some extent from their conception. And unlike artwork hanging on a wall, it’s an experiential process working one-on-one with an artist to curate the pieces one wants to see in their personal collection.

Lying down on an uncomfortable aesthetician’s bench with an arm hanging over the side, my limb evaporates into a feeling of pins and needles. Dustin Barnhart’s characteristic and mischievous smile crosses his face, “Ready?”

Barnhart is a tattooist at Berlin Tattoo in downtown Kitchener, and has posed this rhetorical question many times over the past years. I never am, of course, and a moment after the buzzing machine starts up, there are up to 32 needles moving as fast as three-thousand times a minute in and out of my skin.

Droplets of ink are deposited, triggering the body’s immune response as they are pulled into the dermal layer of skin. Macrophages are sent to devour the foreign pigment particles, but because of their size, ultimately fail. Instead, the macrophages remain at the injury site, securing the ink in its new home. It’s this inadequacy of the body’s immune system which allows tattoos to exist.

I scrunch up my face and let the sound of Norma Jean pound through my headphones to drown out my screaming nerves. A few hours after the burn has subsided, the newest piece of Barnhart’s handiwork — an anatomical heart with drops of blood spilling from the exposed vessels — permanently covers my elbow and joins the other tattoos running the length of my arm.

Joan Coutu is a professor of visual culture at the University of Waterloo and talks about tattoos as a form of art collection in her introductory class: Art History and Visual Culture.

Coutu trained in traditional forms of art when the definition of what could and could not be called art was narrowly defined and dictated by an elite few.

Now, she says people are becoming comfortable making their own choices about what constitutes art, with tattoos bringing more artwork outside and into the public consciousness. Coutu pointed towards the increasing number of students with tattoos she’s seen in the classroom over the years, which she believes can be attributed to an increasingly savvy and visually-literate culture.

The proliferation of tattoos is becoming harder to ignore, and has noticeably influenced the traditional art landscape in sometimes startling ways.

Exhibitions dedicated to tattoos have recently made the rounds at the prestigious Musée du Quai Branly in Paris, The Field Museum in Chicago and at the Royal Ontario Museum, in Toronto.

In 2009, Geoff Ostling, a now 74-year-old Australian man, agreed to donate his skin — entirely tattooed except for his head — to the National Gallery of Australia when he dies.

Before the Amsterdam Tattoo Museum closed its doors in 2012, Henk Schiffmacher’s collection of over 40,000 tattoo-related items — including skin preservations — drew thousands of visitors from across the globe.

Closer to home, Cheryl Wenzel, a Saskatchewan woman who is paying $80,000 to a U.S.-based business, Save My Ink Forever, made headlines in November for honouring her late husband’s request of removing his tattooed skin to preserve and display. The preserved pieces will make their way to a tattoo expo in the near future, and eventually hang on the wall of her late husband’s tattoo studio.

Chris Martin has been studying tattooing for over eight years and spent a year as an ethnographer studying tattooists and the work they do. He’s a Professor of Social Sciences at Algonquin College in Ottawa and earned his doctorate in sociology from Memorial University in Newfoundland. His insights have culminated in his newest book to be released this month, The Social Semiotics of Tattoos: Skin and Self.

“Tattooing is an invitation to art,” Martin said.

And while the meaning behind the art may change with time, tattoos provide a permanent expression of personal identity for a wanting society in precarious times. Facets of life which once provided stability and identity are no longer reliable, and Martin refers to this idea of a void and “fractured identity” as the instigator behind tattoos’ popularity.

Martin says the art behind the ink is a major factor for deciding on an artist. “It is the vehicle to explain what you want to express,” he said.

The industry is changing due to “artification,” as more traditionally trained artists with formal schooling are getting into the field, much to the chagrin of those trained through unorthodox apprenticeships, Martin explained.

Tattooing for the past 11-years, Lindsay Joseph went to a tattooing school when she first started out and agrees it’s looked at with contempt. But she applauds the direction tattooing is going.

“We’re artists in the industry now, not just someone with a tattoo gun anymore,” she said.

Jospeh recently opened up her own studio, Lucid Tattoos, this past September in Cambridge. Less than a month after opening, her appointments were filled for the following year. She’s still taking consultations but predicts her books won’t reopen until 2020.

“I think [tattooing] is the future of art, in a way, because we are so mobile. People aren’t siting at home anymore staring at a wall,” Joseph said.

Antje Hoffmann, a 44-year-old law clerk and mother of two, started getting tattooed by Joseph three years ago. She’s the epitome of a changing demographic of the tattooed and presently has a quarter sleeve. Her lower arm is covered with roses, diamonds and bees while the focus of her upper arm is a “day-of-the-dead girl,” still in progress.

Hoffmann always appreciated tattoos, despite growing up in a time when they weren’t as accepted, but wasn’t sure she would ever muster the bravery to get one herself. That was until she “fell in love” with Joseph’s artwork.

The appeal for her own tattoos didn’t lie so much in a deeper meaning, but rather in the artwork itself and how Lindsay was able to translate her ideas.

“I could stare at my tattoo and find something to appreciate every time,” she said.

Humans have been tattooing for the last 5,000 years, but we are undoubtedly riding a high in western society. Waterloo Region is home to over 21 tattoo shops alone. An often referenced Ipsos Reid poll conducted in 2011 found two out of 10 Canadians have been tattooed at least once. A more recent Harris poll in the United States, and published in 2015, found three out of every 10 Americans have at least one tattoo — with 47 per cent being in the millennial age group, and 36 per cent being “gen Xers.”

It remains to be seen how long the ride will last, but as our cultural attitude continues to shift in favour of tattoos as an affordable work of aesthetically pleasing and wearable art, we will continue to see tattooing not only broaden its reach across the skin of human history, but also onto other mediums and forms of non-living presentation.

Tattoos have crossed the gamut of socio-economic boundaries, democratizing art collection for the masses. They have brought art into the open like never before, no longer confined to the walls of galleries or closed auctions for the affluent. Embodying a living form, they have inadvertently turned our canvases of skin into walking galleries of our stories, at once explicitly public and desperately intimate.