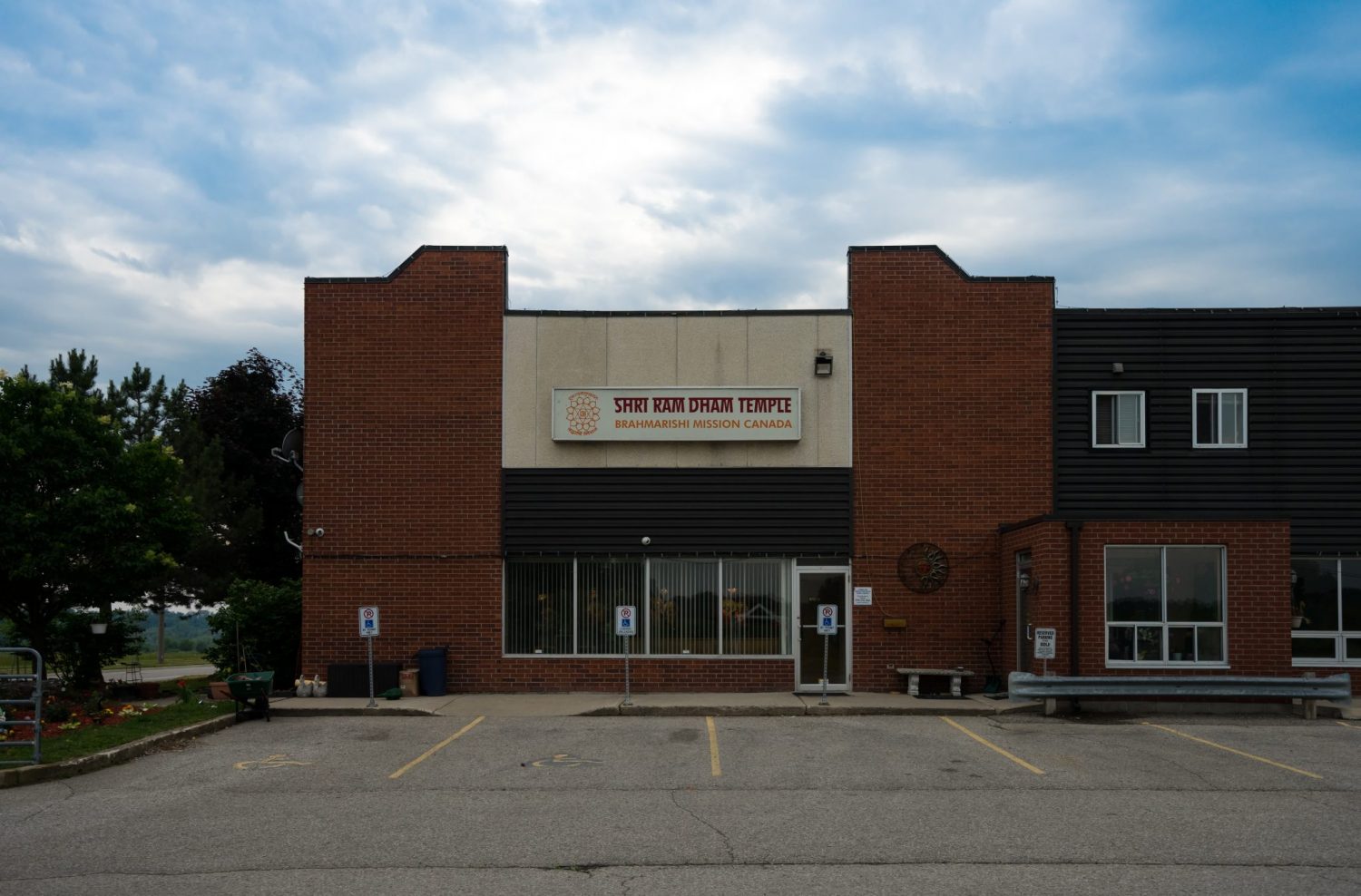 At the far edge of Bridgeport East on the cusp of the farmland stretching northeast of the Grand, sits Ram Dham Hindu Temple and Brahmavidya Yogashrama. The Canadian seat of the International Brahmrishi Mission offers an impressive lineup of classes in Yoga, Hindi, Sanskrit, philosophy, music, as well as camps for children and teens, regular temple services, and festival celebrations. Having frequently driven by its bustling parking lot, I stopped in one Tuesday evening in June for a weekly service (satsang) centered around devotion (bhakti) to the divine monkey Hanuman, who is revered in part for his own exemplary devotion to the Hindu deity Rama.

After placing my shoes on one of many racks, my first encounter was with the mission’s founding spiritual guide (guru), H.H. BrahmRishi Swami Vishvatma BawraJi Maharaj. From a large framed photo just beyond the front entrance, he stood in a dark orange robe smiling out from a thick white mustache and beard, as if in greeting. Inside the main prayer hall, three women seated near the front of the room wore the same orange robes and led the assembly in call-and-response hymnal praise of Hanuman in Hindi, India’s most widely spoken language.

Supported by tablas and tambourines, their devotional recitations filled the large prayer hall, gathering force as the congregation seemed to both deepen in attention and broaden in number  from about 40 when I arrived at 7pm to nearly 100 45 minutes later. Seated in clusters on the carpeted fuchsia floor or in chairs lining windowed walls, Hanuman’s devotees clapped rhythmically, swayed gently, or simply sat. The hymn leaders, including the temple’s head preacher, Swami Chaitanya Jyoti Ji Maharaj, and assistant preacher, Swami Haripriya Parivrajika, were the only women seated in the half of the room reserved for men. The rest of the assembled women filled the half of the room nearest the entrance. 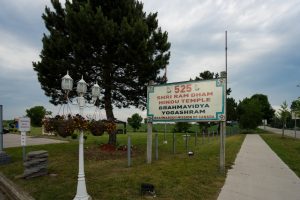 United in song, the group was visually anchored in the standing image of Hanuman himself, life-size and illuminated under a pink dome on the right end of a glistening line of solitary and coupled deities along the front shrine wall: Rama and Sita, Krishna and Radha, Durga, Shiva and Parvati, and Ganesh. Not very long into the service, a shrine attendant drew embroidered curtains around each deity’s personal chamber and adorned them with clothing before unveiling the pantheon again for continued worship — garments quietly offered to the gods.

A handful of children at the service played finger cymbals and hopped giddily between parents, to the dismay of no one. My toddler sat still in my lap for close to half an hour, content to soak up the banquet of sense and spirit with a sprawling stare and the occasional cautious clap. When she finally gathered the courage to wander beyond my reach, a woman kindly guided her to the other children in the room, with whom my daughter proceeded to amuse herself to blissful exhaustion in the accepting presence of Waterloo Region’s devotees of Hanuman.