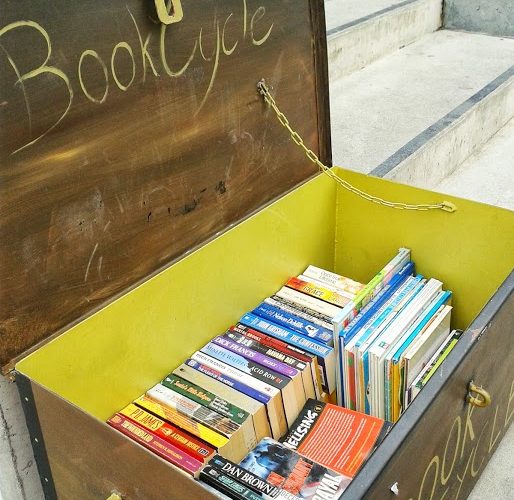 In a city geared towards technological advances, books seem to have become secondary to tablets and e-readers. However, programs like Book Cycle and Little Free Library are promoting reading and sharing books throughout the community.

Gena Meldazy, Carmen Peters and Ashley Kruger are the organizers and founders of BookCycle, inspired in part by the Occupy protest movement. They started the project, known as the citizen library, with the help of the City of Waterloo.

While taking photographs at Occupy Toronto, Meldazy witnessed two protestors barricade themselves in the citizens’ library tent. These two protestors said they would come peacefully, once a promise was made that the books and information would be donated to those without access to such information. “This really made a huge impression on me,” said Meldazy. “One of the things that I got out of it was [the importance of] open access and transparency and better access to information.”

It was especially important to Meldazy that she encourages certain groups to read more. “Reading rates and literacy rates for women are lower than they were 10 years ago,” she said. But she also wanted to make sure that everyone is reading. “The project asks the city and members of the community to self-curate an installation,” Meldazy said. “It asks members of the community who may not interact on a regular basis to intentionally come together around it and think about ‘is this something important to us as a city and as a neighbourhood?’”

The first year the program went above and beyond expectations. They initially thought that by September they would be out of books and have to shut down, but they ended up having many boxes donated by both public and anonymous donors. “It was to the point where we didn’t have room and had to put them in our garage,” said Meldazy The group is already pondering the next iteration of the project. “We can be more visible on Twitter and have a way to draw more people in and make it more fun for people to participate,” Meldazy said.

Plans for 2014 include plenty of ideas, like a vending machine book dispenser or the possibility of combining the installation with another art installation in the UpTown Waterloo Public Square.

While BookCycle is a politically inspired information sharing program, Little Free Library is a program focused solely on promoting literacy and book sharing within our community.

In 2009, Little Free Library began when Todd Bol of Hudson, Wisconsin decided to create a schoolhouse themed mailbox, in honour of his mother, which he filled with books and set in his front yard as a means of sharing them with his neighbours. They loved it so much he went about creating more and giving them away. He connected with Rick Brooks of Madison, Wisconsin and together formed Little Free Library. Their goal was to create 2,510 Little Free Libraries, based on the amount of free public libraries American philanthropist Andrew Carnegie supported around the turn of the 20th century. This goal has already been surpassed and the Little Free Library world community is continuously growing.

Christopher Leishman created the first Little Free Library box in Kitchener-Waterloo, which he placed on his front lawn in August 2012. It was so successful that he has since been asked to talk about his Little Free Library at different book sharing associations, has had people from as far as London, Ontario stop by for a book and has been so inundated with literature that he has had to give some away.

A year after the first installation, there are now five Little Free Libraries in Kitchener-Waterloo. Luckily for us, between BookCycle and Little Free Library, there is no lack of places to go find a great book to curl up and read.