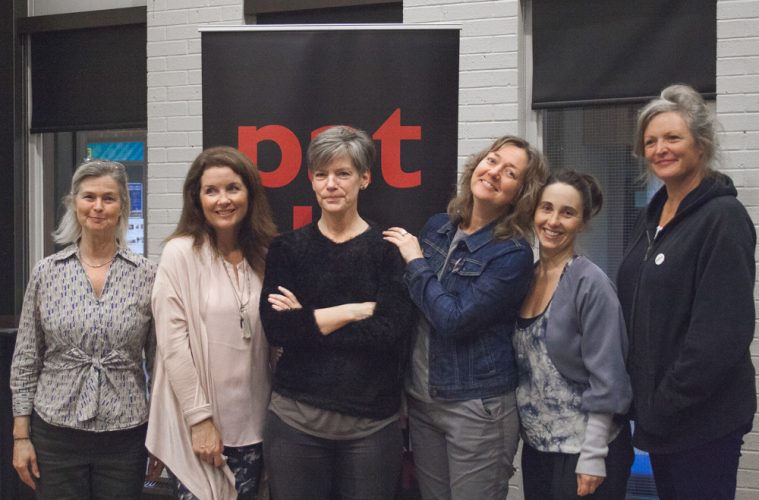 Pat the dog theatre development is the third largest playwright development centre in Canada, the recent recipient of a two year, $96,000 innovation grant from Canada Council to address gender parity in Canadian theatre — and yet, it remains humble.

With the company’s name printed in all lowercase, the main entrance to this transformative space is on the back porch in a century era home located in downtown Kitchener. But what you don’t see, when you’re standing in the parking lot looking up at it, is pat the dog’s biggest claim to fame: it’s willingness to provoke a conversation.

Thirty years ago, it all started with a mom.

O’Connell wrote op-ed pieces about what it was like to be a woman in the mid-nineties, how she felt bathing suit shopping as a twenty-something mother of three and about not being a “Martha Stewart Mom.” O’Connell’s perspective was funny, and being snatched up by the editors of Chatelaine, Today’s Parent and the Toronto Star.

And the feedback was everywhere.

“I remember, there was one day, when I was driving back from Central Meat Market with my youngest in the back in a child seat and I heard my name on the radio,” she recounted.

“It was around Mother’s Day, there was a big vote on the criminalization of homosexuality. I’d taken the stance of “how could any mother deny a child?” And this whole radio program was attacking this viewpoint, and then attacking me. I was gobsmacked.”

But O’Connell didn’t let that stop her.

“In hindsight, it was a wonderful thing to have happen because it makes you realize that as writers, when we sit inside and write, it’s just us and the page. Then it goes out into the world, and there you are, seeking a conversation,” O’Connell said.

“Even if the feedback is negative, that means you’ve hit something, there’s a conversation to be had. And I think that’s a very theatrical thing.”

Ultimately, O’Connell ended up moving into theatre. Having joined a small theatre group in downtown Kitchener, she jumped in both feet first.

“I contacted every dramaturgy resource I could, and taught myself,” she said.

“And here we are,” she said. “Thirteen years later we are one of the biggest playwright development centres in Canada.”

With the two year, $96,000 grant from the Canadian Council, pat the dog can set out do exactly that: create conversations.

“Over half of the theatre graduates are women, and yet only 30 per cent of the shows being produced come from women. We need more women’s stories,” O’Connell said.

On Oct. 10, pat the dog presented the first in an eight part series called Heels on the Diving Board: “a curated series of first-look theatre performances created by fierce and beautiful women” at the KW Art Gallery.

“This show is not only written by a female-identified playwright, but also creates jobs for four female actors over 40,” O’Connell said.

“We’re not interested in creating pieces that just go into somebody’s book case. From the point of inspiration until it goes on the stage, we’re asking ourselves, what can we do to make this happen? We’re creating an opportunity for women’s stories to be told, produced and disseminated. With this grant, we are creating that conversation.”