I stumbled across Jim Tubb’s art gallery earlier this fall when I was walking down Duke Street near Breithaupt. Located in what used to be Schippling’s bicycle shop, I felt transported into something unique – like an artist’s studio you might see in a documentary, but not necessarily situated in one of Kitchener’s oldest neighbourhoods. Upon entering, there were canvases stacked everywhere on the floor and covering the walls throughout the warehouse-type apartment space, even some in what was labelled a “shower gallery” towards the back. As I walked around, I heard someone talking in a room near the front entrance and realized it was the artist himself, on a chair happily chatting about the history of the building with another patron who just happened to stop by. 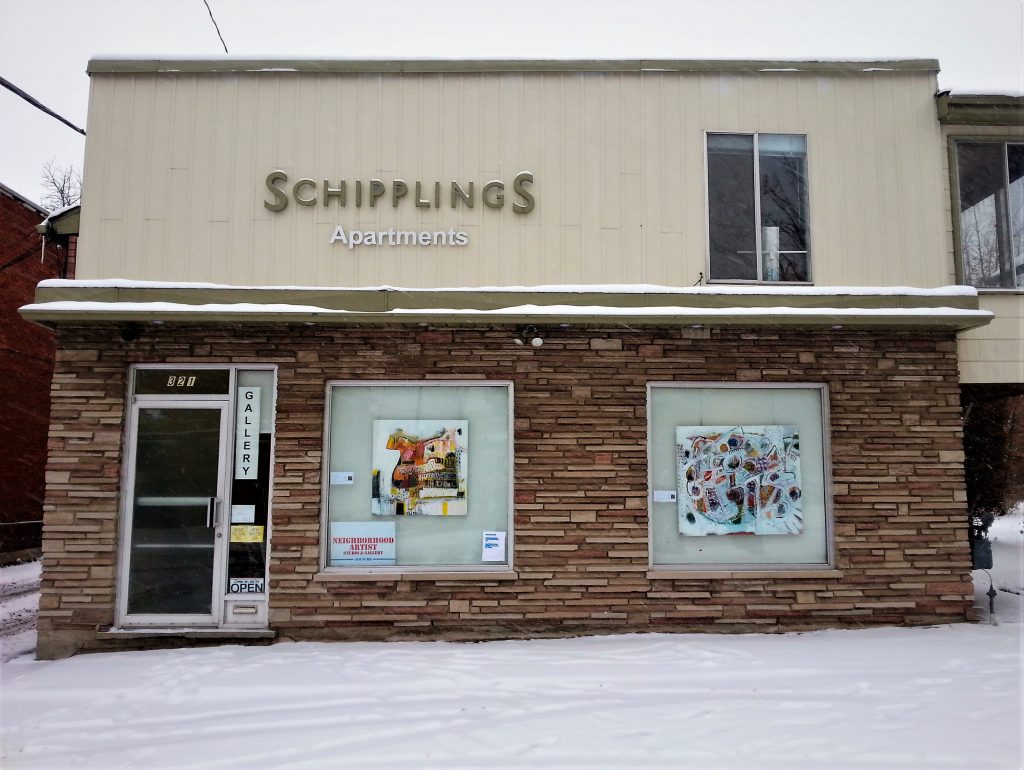 I found Tubb sitting in that same chair, in front of a paint-splattered easel, when I returned to interview him. There was a lot of snow on the ground this time, but his welcoming smile was just as warm. Like visiting an old friend, our conversation started easily, and I entered the mind of one of Kitchener’s most intriguing and original artists,

“Experimenting, is a lot of what I do, eh?” he says. “A lot of my art is not very easy on the eye. Maybe it’s a little disturbing.” 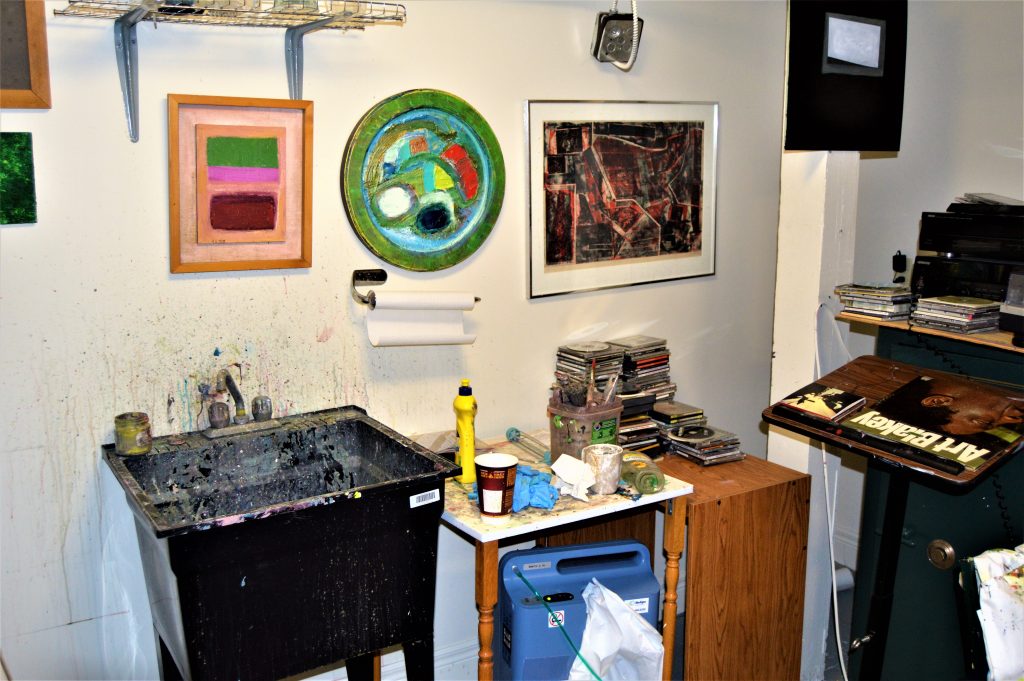 Tubb is wearing blue medical gloves, and, pointing with a brush towards paintings scattered about the room, adds that “sometimes it’s one little mark, one little swiggle … and that’s the part that makes it work.”

At 68, Tubb has been able to dedicate himself full-time to painting after retiring from a successful career as an investment manager. He tells me that making art was always something he wanted to do, but realized early on that making a living as an artist in Canada was “virtually impossible.” I tried to imagine him in a room full of suits.

“I loved it,” he assures me. “You can be creative in finance.” Looking around the room, however, there are no allusions to that lifestyle, only the tell-tale signs of an artist at work: a splattered utility sink, discarded coffee cups (whether they held paint water or coffee is anyone’s guess), scribbled words on the wall with things like “HONEST, ALWAYS,” and a dusty old sound system and turn table. An Art Blakey record sits on the table nearby.

Music has always driven Tubb’s work. “I like getting to know the piece well enough that you can hear it in your head, and you might be humming something and that song will position you emotionally in a certain way that influences the way you paint. Joni Mitchell’s songs will evoke a calmness whereas the avant-garde will create a more chaotic approach.”

Inspired by famous musicians across the spectrum, he puts them into the playful and wordy titles he gives his paintings, like “Listening to Dizzy at the Silver Rail in 1972” and “The Dvorak Cello Concert as Played by Rostropovich (circa 1966-1967 at Massey Hall).”

Tubb uses acrylic paint and oil sticks to create colourful, abstract pieces. He says the brush can “slow you down” whereas the oil stick allows him to create the gesture he really wants. His process mimics musical improvisation – he will start out with an idea that might be completely different when finished. Many of the paintings showcase disorderly lines and lawless shapes, always subject to the artist’s mood and un-conscious musical memory. His process speaks to a different force than the cognizant mind, towards something you can’t control.

Tubb admits to having little formal art education, but says he’s been interested in art since his early days, when he traveled for work. After visiting galleries around the globe he decided to try painting himself, but said he suffered a few “false starts.” 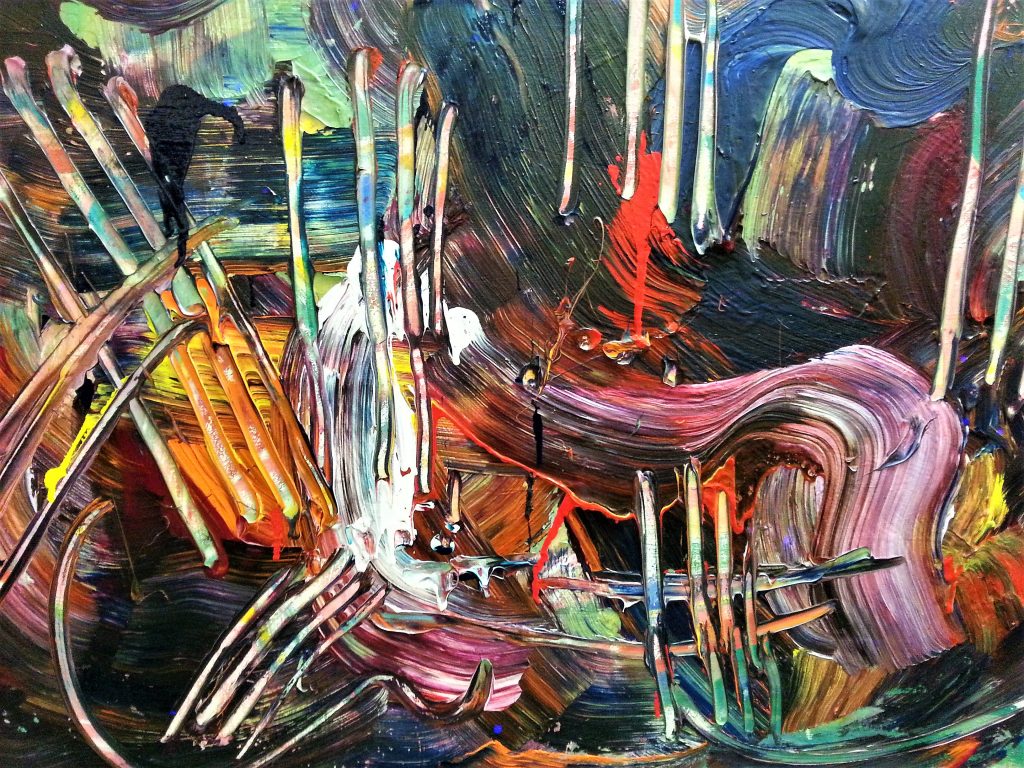 “I was pretty crappy at it, at first,” he says. “I didn’t even know what the term ‘visual artist’ meant.”

I ask if he considers himself one now.

Tubb has collaborated with other artists and put on shows around the region and in Toronto, with stints in gallery ownership as well, but lately he’s more interested in just painting. In terms of showing his work, he has an open-door policy where anyone walking by can have a look around.

There is little pretense in how he sells his work: you won’t find any precious, white gallery walls with uniform framing, and you literally have to flip through stacks of canvases like you might through posters in a music shop. The more you immerse yourself in the environment, however, the more you come to understand the harmony between the art and how it’s displayed. There’s beauty in the alleged randomness, and you begin to realize just how prolific the artist really is.

“It’s a hobby that got ridiculously serious.”

Tubb makes approximately 50 paintings a year, sells around 15, and gives a lot of them away. When I ask what the return is from making art, he says it’s hard to put into words, but offers that “if you’re pure about this and you get a compliment, there’s nothing better.” He adds, “you’re just an artist and that’s enough.”