Notes from the Ground

Several years ago, after retiring from his family practice, Dr. George Berrigan joined a medical care team organized by a local non-profit organization in downtown Kitchener. The team collaborates with street outreach workers to serve people in Kitchener who struggle with homelessness and substance use. More often than not, this struggle is concurrent with mental health issues. 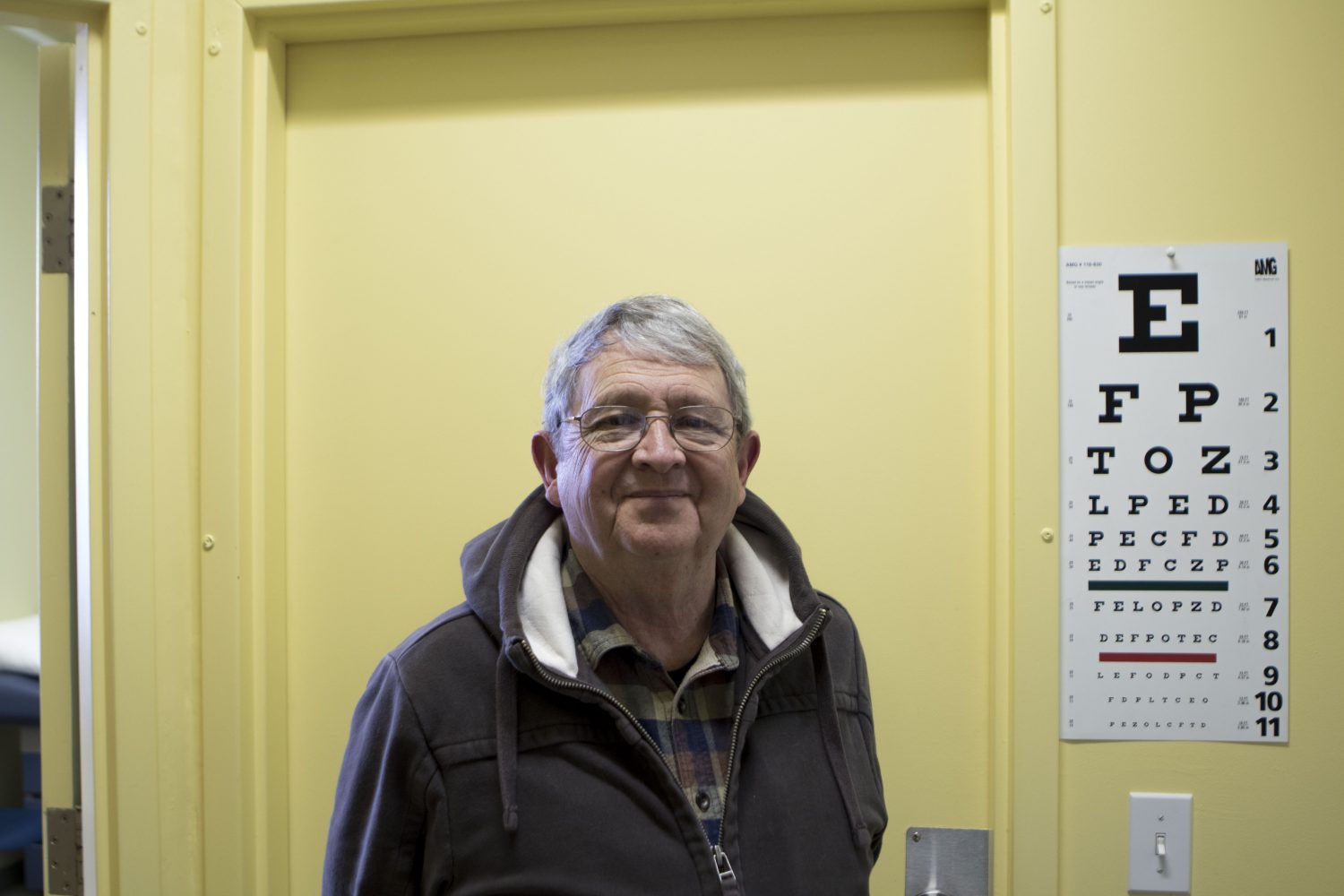 Berrigan admits that, in his bygone practice, he was ill-prepared to treat this demographic. He also admits he wouldn’t have been able to do it without the nurse who came with him from his family practice. Her name is Evelyn, and she is usually the first to greet the patients, exuding care and calmness. She is spunky, a quick-wit who, according to the doctor, “runs the show.”

I spoke with Berrigan to better understand his perspective on harm reduction.

“The concept in harm reduction is: it’s more important to get the person who’s addicted to survive than get him into abstinence right away. And so the reality of harm reduction is primarily dealing with the problems as you [encounter] them as efficiently as you can, accepting the fact that you can’t cure the addiction immediately and in some cases maybe never. But you can reduce the harm.”

He explains that contextual factors are especially important for this approach, referring to a landmark epidemiological study by Dr. Vincent Felitti that determined a link between adverse childhood experiences and adult health issues. One of Felitti’s major findings was that problematic adult substance use is highly related to experiences of trauma as a child.

“That impressed me a lot,” Berrigan reflects. “This whole idea of adverse childhood experiences being such a strong cause of addiction and mental health issues, and that’s a concept I hadn’t appreciated at all. And I also hadn’t appreciated the extent of childhood adversity that goes on in our society.”

He learned about the study from a book called In the Realm of Hungry Ghosts by Gabor Maté, the family doctor who worked with people struggling with addictions on the downtown eastside of Vancouver.

Unlike abstinence-based help programs, the harm reduction approach tries to reduce the harm caused by addiction before complete abstinence is achieved.

“The goal of abstinence is not wrong,” he points out, “but [people with substance use problems] must be allowed to reach stable recovery at [their] own pace, appropriate to [their] personal abilities and psychosocial circumstances. Coercive methods [used] to achieve abstinence early usually set [them] up for failure. The road to addiction recovery consists of multiple relapses and defeats. Even if you don’t get them abstinent, you can get them shelter, in touch with family, all the feasible possible outcomes.”

Harm reduction recognizes that mental health and addiction are not problems happening in a vacuum. It looks “at the whole picture and makes the best choices about the situation.”

He adds, “harm reductionists are accepting that the patient is not going to get to abstinence quickly, that they need the support of us in as many ways as we can.”

When Berrigan got started in harm reduction, he was admittedly an amateur.

“I had very limited training in mental health,” he says, “and no training in addiction. Like most family doctors in Canada I was inadequately trained and prepared to manage addiction problems.”

“But I was motivated to reach out and connect with these marginalized and stigmatized people, and refrain from trying to control or coerce them.”

The approach presumes that real change is something that must come from the inside, and one of the key tools of harm reduction is the art of breaking down big issues into small, “solvable” pieces: “you have to give them the means of accomplishing what you’re motivating them to do. You build their self-esteem by making them try to do things that you know they can do, immediately. Don’t keep trying to make them fail all the time.”

Transitioning to a harm reduction approach is not easy. It requires a whole new attitude, one that goes against our habitual ways of thinking and relating to others. It is, as Berrigan says, “anti-perfectionism.”

Berrigan thinks addiction and mental health issues are still poorly understood by the medical community. And he argues it is an issue that will not be solved by medical science alone. This kind of disease affects everyone. The answer must be community-based, informed by scientific research.

“Recovery isn’t a static state,” he says. “Recovery is an ongoing battle. It’s something you keep alive in you.”

Addiction is a strange kind of disease because it is not cured in the same way that, say, pneumonia is cured. Rehabilitation in addiction is never truly complete; it is merely the beginning of an unending healing journey. Berrigan believes it is only possible with the support of a community.

“You have to engage them in a form of respect and kindness and compassion,” he says. “It’s day-by-day. It’s step-by-step. But it’s frontline. It’s grassroots. It’s person to person. The effectiveness of this work is at the grassroots, one-on-one, day after day, hanging in there. It’s boring sometimes. It’s frustrating. It’s annoying. But it’s how it has to be done.”

Consequently, much is demanded of people who wish to practice a harm reduction approach.

First, they must confront that all-too-human tendency of being judgmental.

“The non-judgmental effect we’re looking for in harm reduction is an ideal. It’s not a reality. Gradually as time goes on we must stop being judgmental and say, ‘This is the reality, now what can I do with it?’” This is the art of balancing commitment and detachment.

Harm reductionists learn to think of themselves as equal to those around them, walking with those who have living problems and being ready to support them when they so choose. It is a matter of attitude, of being trustworthy and relational.

Just having the most up-to-date knowledge on addiction is not enough. Berrigan says that if “you really can’t convince them that you care, you’re not going to be effective.”

“To participate in this work is not just to keep giving,” he encourages, “but to see the wisdom in the old Native saying: ‘Everything sacred moves in a circle.’ In other words, you’re not just giving out; it’s coming back.” In harm reduction, help is circular, not one-directional.

“Good humanitarian work is sincere, strong, steady, and mostly silent,” he says, and “one step at a time, day by day, little by little becomes a whole lot.”