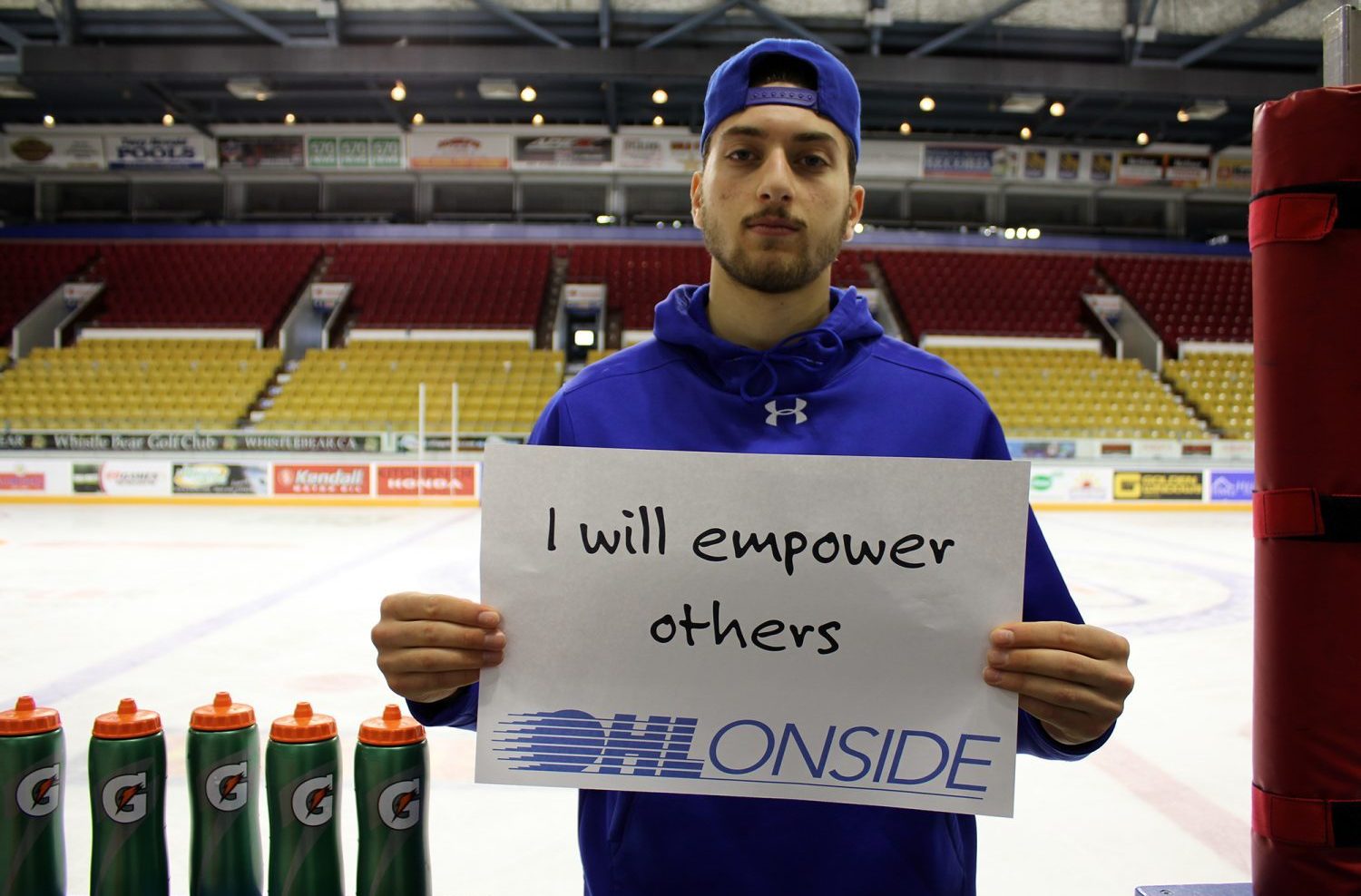 Not Just Locker Room Talk in the OHL?

Elite hockey training is changing, and partly due to the pioneering work of the Sexual Assault Support Centre of Waterloo Region, some of tomorrow’s NHL superstars will start their professional careers with a basic education about the ways their words and actions demonstrate respect for women.

Soucie coordinates SASC’s male allies program, and worked with the Kawartha Sexual Assault Centre (KSAC) in Peterborough to create the OHL ONSIDE program. The program aims to meaningfully engage players – as leaders not perpetrators – in efforts to “promote the importance of respectful relationships between young men and women in their communities,” according to an OHL release.

There are many reported cases of sexual violence involving hockey players – in the OHL and beyond – every year, and it was one of those incidents that led to the creation of ONSIDE: after a Peterborough Pete’s player’s sexually abusive Tinder messages were made public, the team reached out to KSAC.

Soucie led pilot workshops with the Kitchener Rangers and the Petes, and the two-hour training will be mandatory next year for all players and staff of all 20 teams in the OHL, which remains the primary feeder league for the National Hockey League.

Kitchener Rangers general manager Murray Hiebert said he was especially moved by one workshop exercise that had players compare the traits they associate with the dominant narrative of masculinity – and which are often especially celebrated in athletes – with the traits they observe in their most positive role models, typically their fathers.

“[We talked about] society’s view of what a ‘he-man’ should be, and the characteristics he should have, but when you compare that to the characteristics that my players actually view as valuable in men in general … well we talked about [fathers and] support and kindness, which goes to show that these are the things we actually value,” Hiebert said.

The ONSIDE curriculum makes reference to a national study of men’s attitudes about gender based violence, conducted by the White Ribbon Campaign. Researchers found that, while most men know it is important to speak out about violence against women, relatively few feel like they know what or how to say or do the right thing.

Soucie hopes the curriculum will help players notice and resist what social psychologists call “pluralistic ignorance,” where “you think you’re the only one who feels a certain way, when in reality most people feel that way.”

When I asked a male friend for comments, his email reply included the following, which also returned me to many of the hockey dressing rooms of my youth: “In high school, there were always a few real dicks who said vile and violent things about most everything and everyone (especially women), but the rest of the guys were actually not that bad. But those not-so-bad guys, myself included, never questioned the A-holes’ comments, behaviour, actions. Not really. Early in each season, I could always identify a guy on the team who might, one day, be a friend because he was the one that tucked himself away in the corner of the locker room with his head down, not saying much.”

“Most guys think they’re the only ones in their friend group uncomfortable with the expectations placed upon them,” Soucie said, especially about the ways we talk about women and sex. Believing you are on your own makes it harder, for most people, to intervene during particular incidents.

The curriculum also refers to author Jackson Katz, who writes that “individual rapists aren’t just crawling out of the swamp. They are being produced by our culture.” The circumstances that surround OHL players seem especially toxic: pulled from home as barely-teenagers, celebrated by their peers and their community, vicariously hoped-through, these players have been told in different ways for much of their lives that their on-ice performance is what matters most of all.

Despite those circumstances, Soucie said “this conversation lands well because [players] have the lived experience of how this dominant narrative of masculinity impacts them, and not only physically, but when a coach tells them not to be a pussy, or to man up.”

“While male athletes receive privilege and power … their bodies are often disciplined and pushed to the limits. They are rushed back from injury or hide injury. They sacrifice their bodies, and so a lot of these young players recognize how those dominant messages have led them to jeopardize their own health,” Soucie said.

The imperative to “man-up” seems especially weighty in a league like the OHL, where players are basically working for free, for profit-seeking organizations like the Rangers, in a for-profit league. The overwhelming majority of players will never play in the NHL.

Which is to say that the OHL is a big business with a brand to protect and improve upon. Casual fans help to fill up the Kitchener Auditorium every Friday, but might choose to take their dollars elsewhere if their boys in blue show up in police reports instead of box scores. The OHL must also fight to keep attracting players who could play at American colleges or, like last year’s first-overall draft pick Auston Matthews, professionally overseas. Parents must trust the OHL to take care of their kids.

But no matter the reasons the OHL is making this program mandatory, Soucie said, “there is a real appetite in the dressing room for these conversations.”

“We’re just planting seeds … that might not materialize, maybe not ever or not for 15 years when these men start to have families of their own,” he said. “But seeing young men willing to make themselves vulnerable and willing to share what they’re afraid of, what they’re struggling with, what pressures they’re facing, that’s powerful to see.”

Near to the end of our conversation, Soucie shared one last quotation, this one from the abolitionist Frederick Douglass: “it is easier to build strong children than to repair broken men.”