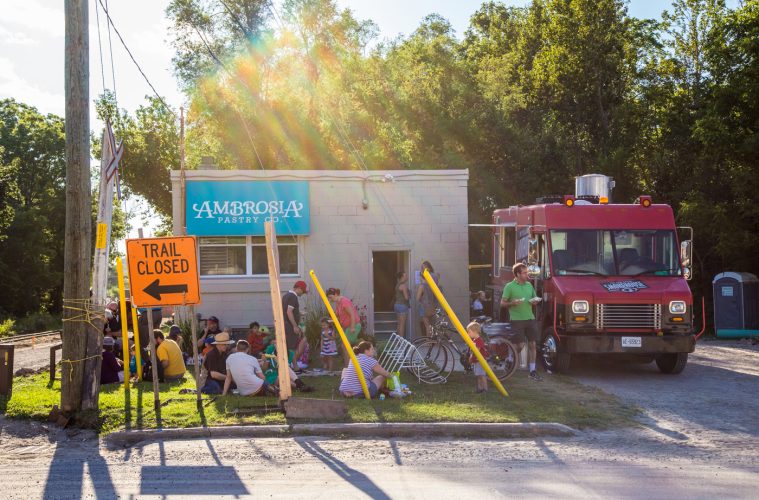 Two parts amazing food, one part community building, and a dash of magic. This is the newest recipe that Ambrosia Pastry Co. has been cooking up this summer. On the border of Kitchener and Waterloo at their headquarters on Roger Street, the local bean to bar chocolate maker opens its doors to the community every Thursday night from 5 to 8 p.m. and plays host to the best dinner party in town.

Ambrosia moved into the space on 150 Roger Street last year, and the conversation about using the space for a pop-up dinner began between Ambrosia owners Aura Hertzog and Tim Simpson and West of Seoul’s Chris Kim.

“We had been looking for a way to use the space with Chris and we had wanted to do something with ice cream,” says Hertzog “so this was what we came up with.” 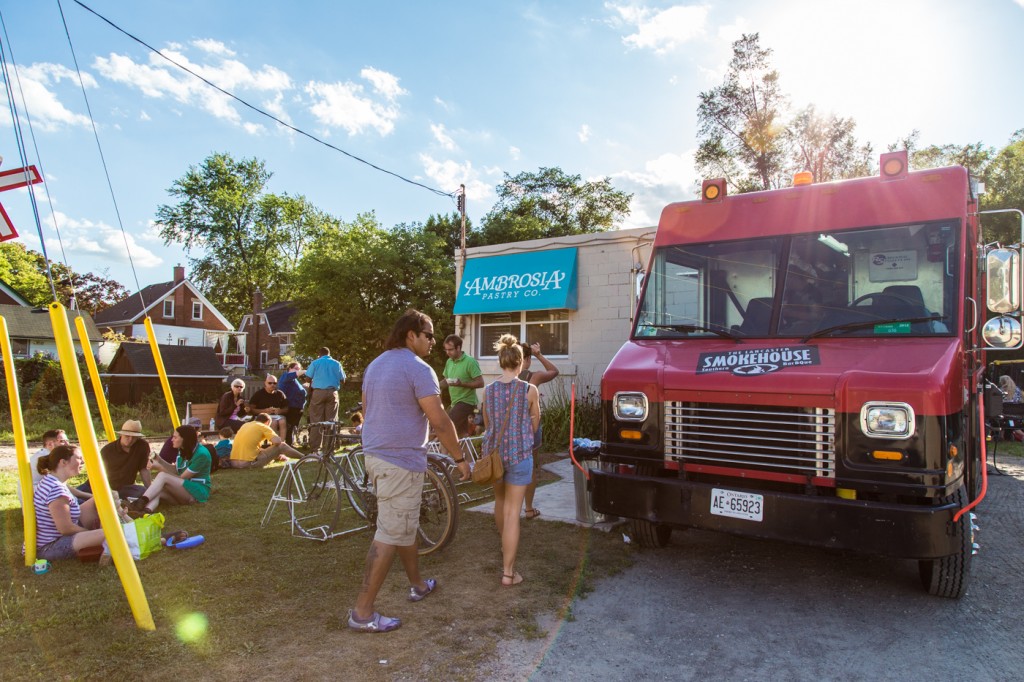 The ice cream sandwiches are made in-house, from scratch by Ambrosia. Flavours rotate, and at least one new creation is introduced each week. Ambrosia also makes three (sometimes four) cookie options for the “bread” of the sandwich. Ambrosia’s famed Liege Waffles are available each week but classics like shortbread, ginger, and chocolate chip have all made an appearance as well as kouigaman and almond meringue.

To make the dessert decision-making process even harder for diners, Hertzog and Simpson’s entrepreneurial 9-year-old son Elliot has recently also added rootbeer floats to the menu.

“It’s also nice for me to share this with him and have him involved in our business and our passion,” Hertzog says of Elliot’s involvement.

“We’ve had a great response from the community. This was something the neighbourhood really needed and people are responding,” Hertzog explains. “This isn’t like going to a restaurant, where you each sit at your own tables. This is a community event where you meet your neighbours, you can have a picnic.”

Roger Street is transformed on Thursday nights, people from far and wide are coming to Truck Eats Cool Treats. Amidst the Spur Line Trail construction which began in earnest in late May, diners are undeterred. By foot or bike or in little red wagons people of all ages are attending this pop-up.

“There’s a lot of construction going on in the city right now but we wanted to show that construction can’t stop us,” says Hertzog, “and because we’re typically open to the public only Saturdays, the impact has been minimal for our business.”

Running alongside the Waterloo Spur Line train tracks, the rugged trail has been used by intrepid cyclists and pedestrians for years. Current construction aims to improve the safety and accessibility of the trail by providing a paved multi-use path and lighting.

“Once it’s completed, it will be a great way to connect the two cities,” says Hertzog.

Scheduled to be completed in September, there is a lot of excitement about the trail updates within the midtown community and Ambrosia shares that excitement. Located directly on the trail, Ambrosia hopes to have a special event to celebrate the Spur Line completion.

In the meanwhile you can grab dinner every Thursday night at Truck Eats Cool Treats until August 20, 2015.