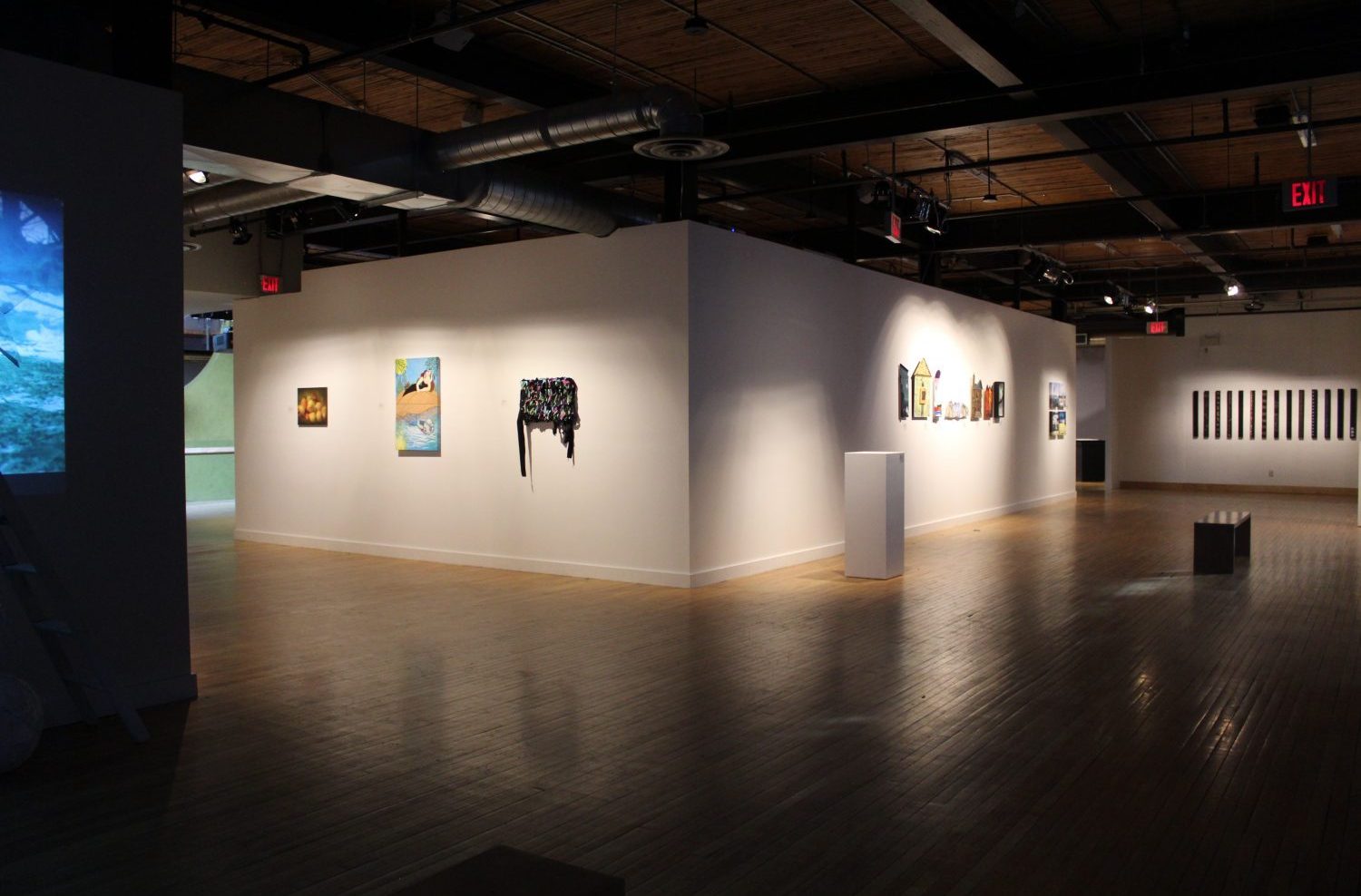 “Iä! Iä!” screams an acrylic typewriter, its keys assaulted by the enormous tentacles of an octopus-like beast beaming from the centre of a small, square painting.

“It’s based on Lovecraft,” explained D.H. McKee, co-creator of the mixed-media painting, “Non-Euclidean Poetry,” currently on display at THEMUSEUM. The phrase is taken from “Iä! Iä! Cthulhu fhtagn”: a call used to summon an elder god. 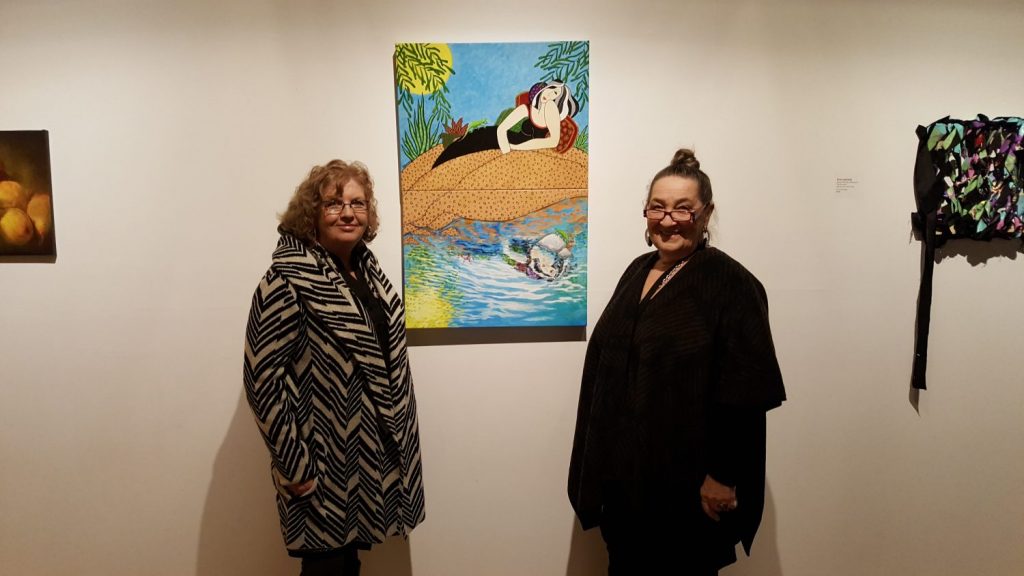 It’s an arresting visual, but it calls into question what sort of cohesion this work plays into as part of the show, especially when contrasted against pieces like the enormous, free-hanging, deconstructed painting, “Memory and the Temporal Exchange.” The work is another intriguing piece that depicts, in vague, fragmentary strokes, its own inception. To expound on this theme, “Exchange” is fastened with hinges, making it easily transportable. Amber Pacheo, co-creator of the piece in a first-time partnership with James Nye, described it as nomadic.

“It’s always a part of you, no matter where you go,” she said.

The works continue in this random, disconnected vein. Two films are projected on either side of the gallery — the most popular of which had its screen intentionally obstructed by props, including a large, white star jutting from the wall. 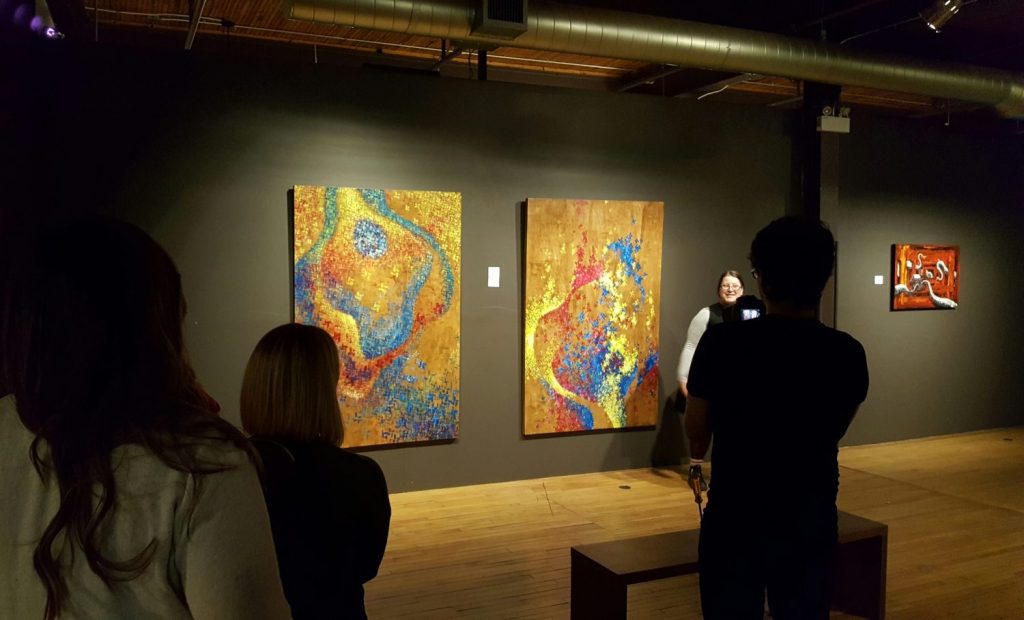 A line of 14 rectangles create “Linear Conversation,” each decorated with a dynamic gradient of chaos, highlighting the only discernible words, ‘Speak Up’, in the resolute centre.

The theme of the show matches its title: #Exnovation.

It’s an unofficial word, absent from the Oxford English Dictionary, that connotes the inversion of innovation. Described by the collective, it’s when “a person from outside of the team creates changes.”

To align with this concept, every piece on display, cultivated by 36 artists from within the region, was co-produced. The ideology was then extended, first to THEMUSEUM CEO David Marskell, whose exnovative effort was in allowing an exterior group to have their way with his gallery, then to the audience themselves: a chalkboard sits along the edge of the exhibit urging anyone to write down what they think and see.

Perhaps what’s most striking about the exhibit is in what it lacks, rather than what it actually is: the malleable theme, instead of uniting the final product, absolutely eliminates cohesion. Artists with a similarly local background are dispersed between different genres and modalities, expressing their own self-contained ideologies. This absence of a consistent artistic theme highlights an ultimate lack of acute, local, cultural identity.

Fortunately, this inconsistency of identity doesn’t detract from the superlative nature of the work. The group of excellent artists behind the display, Collective Identity, was founded two years ago by Terre Chartrand and Jennifer Gough. Chartrand plans to continue the group’s relationship with THEMUSEUM into the foreseeable future, and hopes to arrange annual exhibits. Describing her vision, she said she wants “to continue to give a novel platform for artists in the Waterloo Region.”

#Exnovation will be on display at THEMUSEUM until February 26.