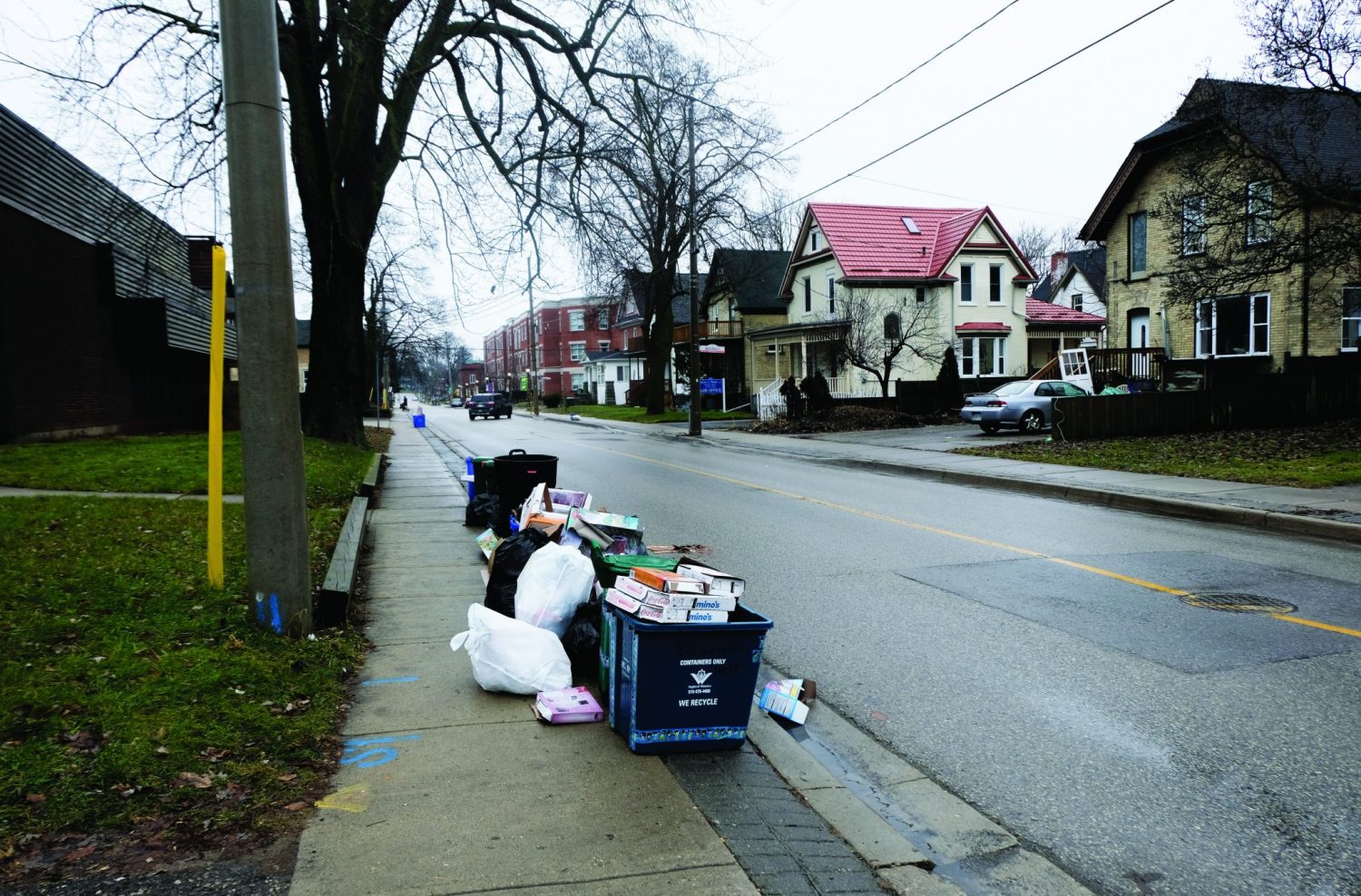 Local businesses in uptown Waterloo and downtown Kitchener (DTK) are looking for support from the Region of Waterloo to implement consistent, efficient waste and recycling services.

For businesses, waste services differ greatly from the procedures and policies pertaining to Kitchener-Waterloo residents.

As a result, some local businesses have been experiencing lack of consistent waste and recycling pick up, while some businesses are completely on their own in terms of finding a way to dispose of waste.

According to Shane Gysbers, co-owner of Jane Bond, most businesses in uptown Waterloo located along King Street get consistent garbage and recycling pick-up from the Region of Waterloo.

“[In the past, Jane Bond’s] cardboard would go out and our garbage would go out … it was free; it was included. There was never any issue it had been that way for 23 years,” Gysbers said.

Once construction in uptown was finished and King Street reopened, Gysbers explained that the Region reevaluated their waste collection routes, where and to whom they provided services.

Jane Bond was one of the small handful of businesses who was affected by the new routes. As a business in a free-standing structure on a side-road, Jane Bond’s waste and recycling is not currently being picked up by waste management.

“We’re sort of at this point where we’re like: how are we going to handle this?” Gysbers said.

“As of right now, because of the former partnership between Jane Bond and Starlight, we’re still able to put our waste out front of [Starlight], for now.”

However, this option is temporary and only a short-term solution for Jane Bond. Moving forward, the small business will have to look into other options for waste removal.

“The Region did try and suggest a few things, such as reaching out to local farmers to take our compost and stuff like that,” Gysbers said.

“However, the longer the compost has to sit around, the more risk there is … of bad smells if it doesn’t get picked up often enough — all the usual things that are associated with garbage sitting around for too long.”

For Jane Bond, the business will have to look into an independent company to collect their waste on a consistent schedule.

“And if you look at the rates of these kinds of things, they’re not cheap. For a business our size, this is a big hit,” he continued.

“We’re not in a terrible spot at the moment, but at any point we could have to curb a huge monthly expense to deal with this situation.”

In DTK, however, more businesses are struggling with lack of both services and infrastructure to properly dispose of their waste and recycling.

Tyzun James, owner of Cafe Pyrus, said that the majority of waste services in DTK are catered to residents. For businesses producing industrial sized loads of both waste and recycling, the options are slim.

Currently, for all businesses in DTK, there are three communal bins available outside to collect waste and cardboard. However, these bins are not nearly enough room to fit all the garbage and recycling that needs to be disposed of on a daily basis.

“They get filled and they are overflowing; for a lot of places, unfortunately, garbage is just garbage to them. They don’t see anything bigger, so it’s just put on the ground and there’s no recycling happening. What would be better is if we had a way to do a large recycling and infrastructure for it,” James said.

As a result, Jane Bond looked into other options, such as using alternative bins outside of their establishment since the region was unable to pick up waste daily as they have in the past.

“We went looking for all sorts of solutions. We had recycling bins put in the back, and unfortunately because of where they are and the current climate of downtown, we were filling them and then picking them all up because people would go through them for any kind of deposit based recycling, so that would end up all over the ground and it was causing a big issue for us,” James said.

Cafe Pyrus’ current solution is a partnership with Full Circle Foods, with whom Cafe Pyrus shared the cost to get consistent recycling and compost pickup.

However, for DTK’s future, James believes proper infrastructure and a collective service that all businesses can pay to participate in is a feasible way to ensure waste and recycling is disposed of correctly and effectively. He also hopes that businesses have access to services that assist them in efficiently disposing of their waste.

“I’m a business. I get that that’s a part of your operating cost,” James said.

The Community Edition reached out to the region of Waterloo but did not receive a response at the time of publishing.