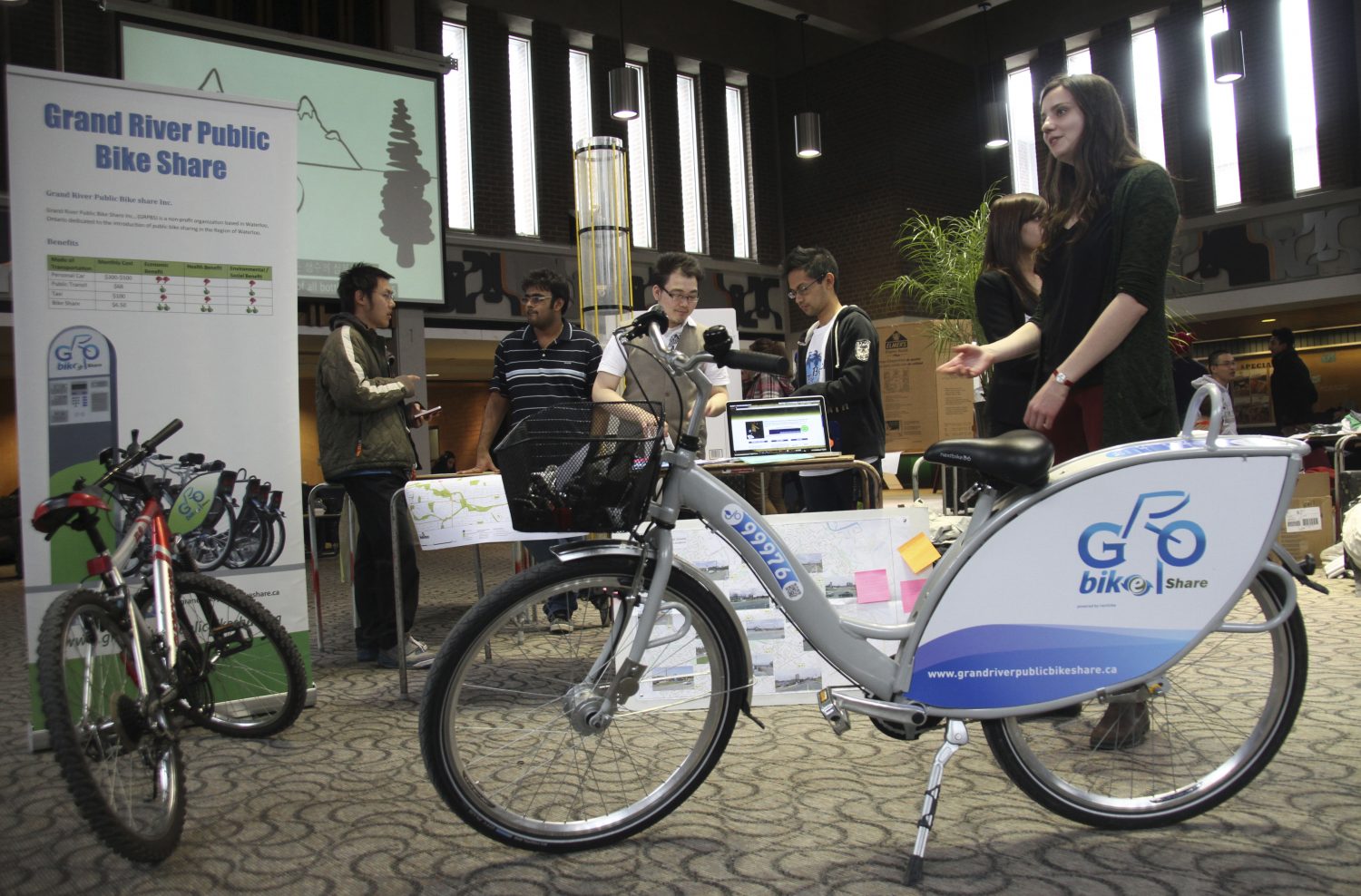 Waterloo Region may soon be home to not just one, but two bicycle-sharing programs.

Both Grand River Public Bike Sharing (GRPBS) and The Working Centre are in the midst of rolling out systems that would allow residents of Waterloo and Kitchener, respectively, to rent bikes from docking stations for as long as the rider needs.

At the Sustainability Fair at the University of Waterloo last month, Bianca Popescu, a volunteer with Active Community Transportation, explained to interested onlookers exactly how bike-sharing works and who needs it. “I think because Waterloo has so many university students this would be a great system for students to use,” she explained.
Community members can buy a membership for up to a year, or as little as 24 hours. Once purchased, they have access to branded cycles that can be driven from station to station, where they are docked after use. It’s a system that has become popular throughout Europe and is making headway in North America. In Canada, Ottawa, Toronto and Montreal have programs operated in part, in some cases, by Bixi. Closer to home, Hamilton’s city council recently approved a bike-sharing program.

GRPBS and The Working Centre have both gotten the support of various proponents of alternative forms of transit in the region. “We find generally that public bike systems encourage more people to try cycling on a more regular basis,” said Norma Moores, the project manager of the draft of Region of Waterloo’s Active Transportation Plan. It could also encourage demand for better cycling infrastructure in the region. “[The two] kind of tag team each other.”

The GRPBS program will be similar to Bixi’s. However, The Working Centre’s plan will see the bikes operating on a different type of docking system.
“The way that we generally designed the system is that the station will have a bike rack and it’ll also have somewhere where the keys are stored,” said Adrian Underhill, who leads the bike-sharing program for the centre.

While the two systems aren’t integrated due to the different technology that they use, Underhill did say that he is in talks with GRPBS to determine how the two programs could work together.

Bike-sharing programs have come under fire for being a financial burden to municipalities. In 2011, Montreal’s city council approved a $108-million bailout to Bixi after the service found itself deep in debt. Unlike the programs in other Canadian cities, GRPBS plans on being 100 per cent self-funded. “We don’t want to rely on tax dollars,” says Prasad Samarakoon, one of the founders of GRPBS. “We want to build a sustainable model.”

GRPBS needs to wait to get funding from sponsorships and from people signing up for memberships ahead of the launch. “We need to meet a minimum of 800 members before the launch,” said Samarakoon. They’re also waiting for additional final approvals from the Region of Waterloo and the City of Waterloo before they can set the date for their official launch.

The Working Centre was granted $15,000 for its program from the Community Environmental Fund according to James Lapointe, a transportation demand manager and planner with the Region of Waterloo. However, The Working Centre notes on its website that it plans to cut costs by about two thirds by not using the same technology as Bixi sharing systems. They expect to have their stations operational sometime between May and June.

Underhill hopes that a yearly membership to the Working Centre’s program will cost $40. A regular annual fee for GRPBS will cost $78 ($70 for students). However, GRPBS has also reduced yearly fees in hopes of reaching their 800 member goal by the end of the month.

Cycling enthusiasts are hopeful that the two systems can integrate to provide complete service to residents. Mike Boos is a member of the Cycling Advisory Committee in Kitchener and an advocate with TriTAG. “I would say in TriTAG’s perspective we would really like to see good cooperation between the two providers,” he noted. “It would be great if they could operate on the same technology and be entirely interoperable.”

The benefits for the region of both bike-sharing programs could be a positive boost to cycling culture in the region. “It’s eco-friendly, healthier and very economical mode of transportation,” said Samarakoon.