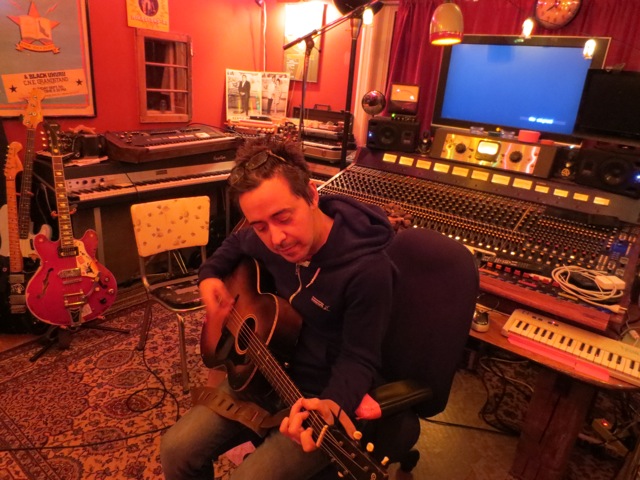 Bob Egan catches up with Juno nominee Danny Michel to find out how a K-W native got nominated for the World Music Album of the Year.

When the nominees for the 2013 JUNO awards were announced recently, no one was surprised to see K-W’s own Danny Michel on the list. After all Michel has been nurturing his singer/songwriter craft to critical acclaim for well over two decades. What was surprising was that he was not nominated for the expected categories (e.g., Songwriter or Roots Album) but for the World Music Album of the Year.

How on earth did that happen?

“I had a vacation in Belize many years ago and fell in love with the place. I found myself returning every year or so and getting drawn into the richness of the culture and the kindness of the people. After a while I wanted to give back to Belize and become more than just a tourist who takes,” said Michel.

Michel decided he could make a difference in this paradise of crushing poverty by raising money to pay high school tuitions for the countless children whose families could not afford it. His commitment to help made him much more than the average tropical tourist, so when he inquired about doing a bit
of recording at Belize’s only recording studio he was welcomed with open arms and open hearts. The cream of Belize’s traditional musicians, the Garifuna Collective, turned out to accompany Michel on the cross-cultural musical journey of a lifetime.

The result is Michel’s stunning new release Black Birds are Dancing Over Me. This music, born from a love of culture and compassion, has resonated across the musical landscape. The critics are effusive. Music fans of all stripes are moved. The big festival bookers are calling and the record is being released worldwide.

How did a kid from KW with a dream make the journey from the bars of Waterloo County to playing the world’s biggest stages with internationally acclaimed musicians earning critical respect and a JUNO nomination along the way?

I caught up with Michel recently — between sessions in his local studio where he was doing some demo work with Madison Violet in preparation for their fifth record — to find out.

“Hard work,” was Michel’s answer. “The highs are high but the lows are really low. It takes a lot of hard work, really sustained hard work to make it through. Being a musician is a constant struggle. Not only do you have to work hard, you have to know about the business too, especially these days. Being a great guitar player isn’t enough. You have to be smart about the business.”

Does he have a specific high he remembers? “The first time I stepped onto the stage at Massey Hall and stood where my hero Tom Waits stood. I looked out to the seat where I sat many years before as a young man watching him and I remembered that being here performing on this stage was once my dream.”

What about the lows? “Those you tend to forget.”

Luckily for us music lovers and for the kids of Belize, Michel has forgotten the lows and worked hard to follow his passion. He is the humanitarian and travelling troubadour that makes K-W proud.

Michel is offering free downloads of one of his songs for followers of his Twitter @dannymichel or fans of his Facebook page facebook.com/danny.michel.music. You can learn more about Michel at dan- nymichel.com.

Bob Egan has been a member of Blue Rodeo for thirteen years. He also runs Bob’s Guitar Service in Kitchener, Ontario.