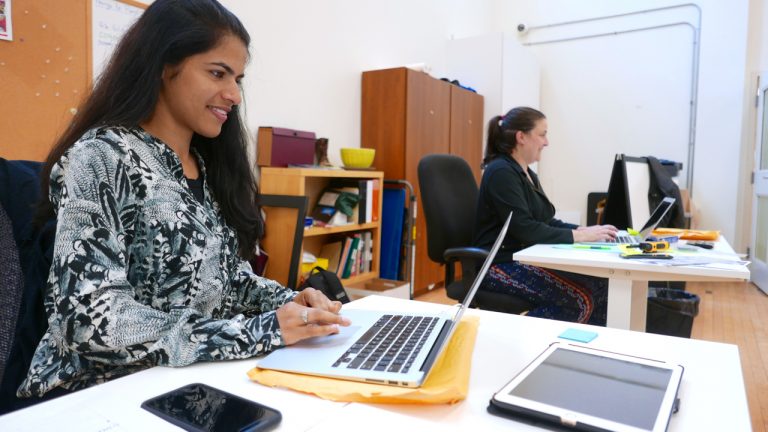 In Her Shoes Offers New Opportunities

Dreaming of the perfect pair of designer shoes or handbag for a discounted price? In Her Shoes is helping women who are visible minorities, as well as cis, trans and non-binary women gain valuable job skills and hands-on experience in their downtown Kitchener shop.

The social enterprise is an innovative employment and entrepreneurship program run by YW Kitchener-Waterloo which all began with Jennifer Gordon, the YW’s director of youth services. She started running a one-year pilot program with 15 women back in 2017. In Her Shoes then received the Ontario Trillium provincial seed grant of nearly $75,000, securing the future of the eight-week program for people facing significant barriers to employment.

Emily Dyck described Gordon as a social worker and a community builder, saying that she was inspired by Gordon to apply for the role of technical trainer and social enterprise coordinator.

“I love it. It’s my dream job. I love figuring out, okay, what is the best way to do this? And how can we do this? You kind of have to be a Jill of all trades and that’s really cool,” Dyck said.

Both their physical and online stores sell new and used women’s accessories to give women and girls in the program the opportunity to gain employment skills and/or develop their own business.

“We’ve talked about Esther a lot on our social media — how she came into this program, and she didn’t know how to use a computer. She’s 63 and a refugee from Liberia. She sent her first email on the first day and had a Facebook page by the end of the week. And at the end of her course, she had a Kijiji ad [selling her own products],” Dyck said.

Their women’s program is now funded by Immigration, Refugees and Citizenship Canada (IRCC) which facilitates the arrival of immigrants, provides protection to refugees, and offers programming to help newcomers settle in Canada.

Every session they run is tailor-made to the group. With the women’s program, they were finding that the applicants had a wide range of skills ranging from being skilled, to never having touched a computer, so they’ve improved the training by separating it into two streams: beginner and advanced. Karen, who teaches the beginners program, is a graduate of the program herself and is a thriving entrepreneur selling her art through social media. The advanced programming is for the same population who already have a product they want to sell, or have other entrepreneurship ideas.

“We have quite a spectrum. We teach them … how to do photography, how to do product descriptions for a website. So we’re working pretty closely with Shopify and we have a platform where the participants can develop their own website underneath our platform until they’re ready to launch,” Dyck said.

Shopify has been involved from the very beginning. On top of hosting their website, they provided furniture and refurbished Macbook computers to In Her Shoes’ four full-time employees.

Dyck said that Shopify has donated more than $20,000 to the program, in addition to having speakers come in and talk about website development.

This year, In Her Shoes is also running a youth program for 15-30-year-olds geared towards employability and skill development, after seeing the success of the women’s program.

“There’s eight youth that come in from 2-8 p.m. every day and they take turns working in the store. They get some life skill time as well, throughout the day,” Dyck said.

They will also be adding in a mentorship piece. Each person will be set up with a mentor in the community who will continually provide resources and networking for each participant when they are finished with the training.

MP Raj Saini said in a release that women who are visible minorities in addition to being a newcomer to Canada face more challenges than any other group entering the workforce, but that it isn’t just about finding a job.

“It’s also about providing a sense of dignity and belonging,” he said, and that’s just what In Her Shoes is doing.

You can help by visiting the store or dropping off donations at the centre. In Her Shoes is open Monday and Tuesday from 4-8 p.m. and Wednesday – Friday 11 a.m.-8 p.m. at 84 Frederick Street in Kitchener.