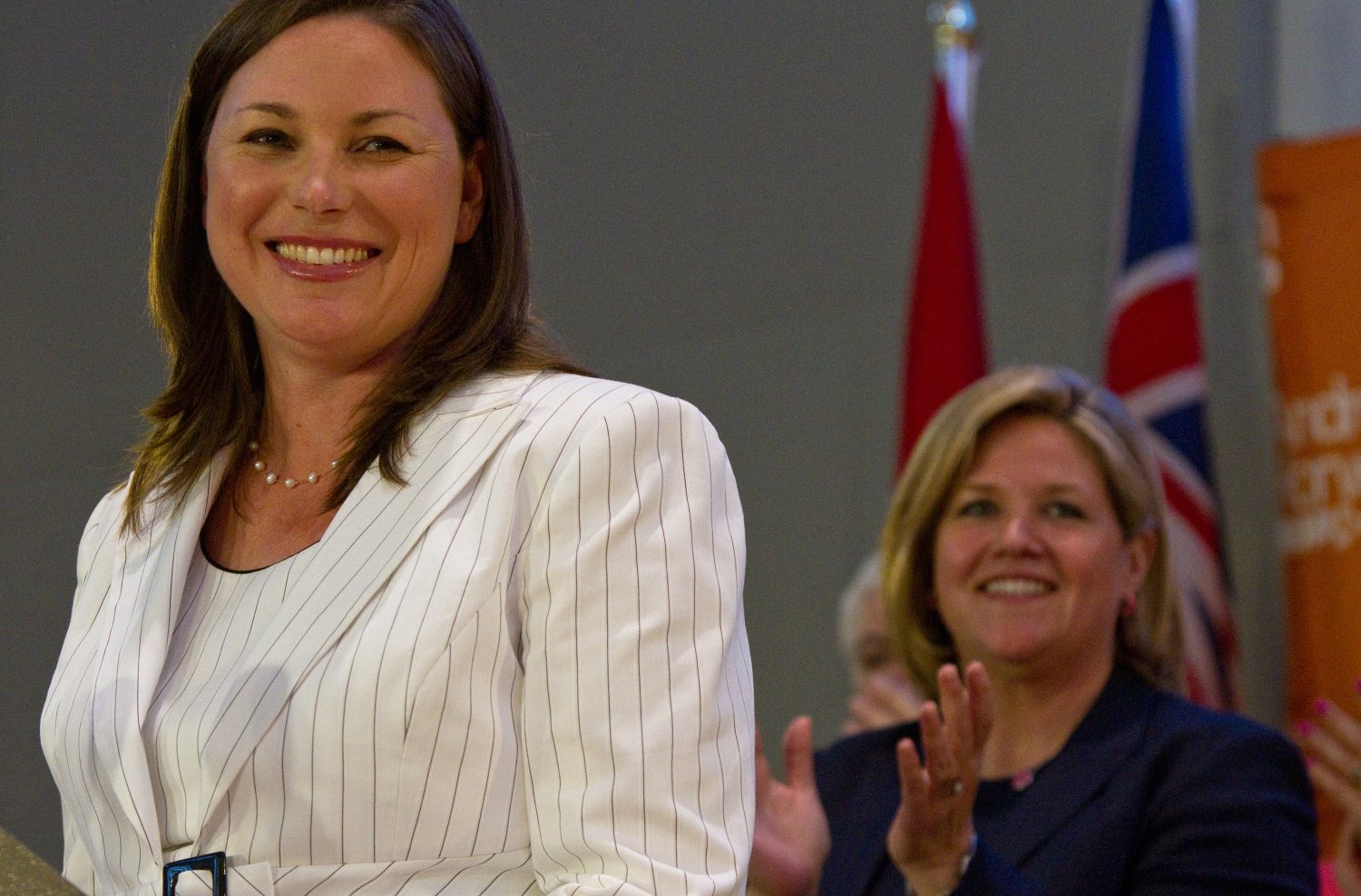 Catherine Fife speaks to supporters on Thursday after being declared the NDP candidate for the upcoming K-W byelection. (Photo by Nick Lachance)

It has been one year since Catherine Fife assumed the responsibilities of Kitchener-Waterloo’s Member of Provincial Parliament (MPP).

“It has been a huge learning experience,” Fife reflected. “There have been moments of great intensity, but I’ve truly enjoyed working in the riding and connecting with people.”

Fife won her seat one year ago in a by-election, winning approximately 40 per cent of the vote. The New Democratic Party had never won the Kitchener-Waterloo riding on the provincial level and ended a 22-year Progressive Conservative stronghold.

Fife’s seat also contributed in preventing a provincial Liberal majority. “It was a historic vote for K-W,” Fife explained. However, only eleven days into Fife’s new title, McGuinty shut down the Ontario legislature. This prorogation was a huge challenge for Fife, who explained that she had been working ten years to get to Queen’s Park.

“Sometimes its hard not to take these things personally,” she explained. “It seemed like a cruel irony that the House was shut down.”
McGuinty announced in October of 2012 that he was stepping down as Liberal leader.

The prorogation inspired Fife to form her first private member’s bill, Bill 24, which limits the powers of prorogation, modifies how the House works and when it can be “shut down.”

“There is a cost to prorogation,” she said. “Not just in trust with the electorate, but over 100 pieces of legislation died when [McGuinty] did this.”
“So it meant that he had to start over again.”

McGuinty’s resignation was presumably connected with the Mississauga power plant scandal, where the Liberals scrapped the project, costing the province upwards of $585 million.

However, Fife speculated that her seat heavily influenced the prorogation.

“In many respects it was personal,” she said. “Because if the people of K-W had gone a different direction, Mr. McGuinty would have held his majority and he probably wouldn’t have resigned.”

Since being elected, Fife explained that the NDP has been standing up in office. According to Fife, their major accomplishments have included negotiating a youth employment strategy in the last budget and changes to home-care.

In the last seven by-elections, the NDP have won three seats at Queen’s Park.

She went on to discuss her interactions with members of other parties in office. The groundwork at Queen’s Park is allegedly not set up so that other parties can interact.
Fife, however, told The CCE, that she works closely with other members from both the Liberals and Conservatives.

Going forward, Fife said that the NDP want to achieve budgetary wins, set up financial accountability in office and prevent future scandals.
“That’s like a full-time job here,” she laughed.

On a personal level, Fife explained that Andrea Horwath, the leader of Ontario’s NDP, has been a great mentor. However her transition has been greatly influenced by her predecessor, Elizabeth Witmer.

“I will say that [Witmer] gave me great advice when I took over the seat,” Fife concluded. “She told me to come prepared, do your work and when you can make family time, make sure its quality.”