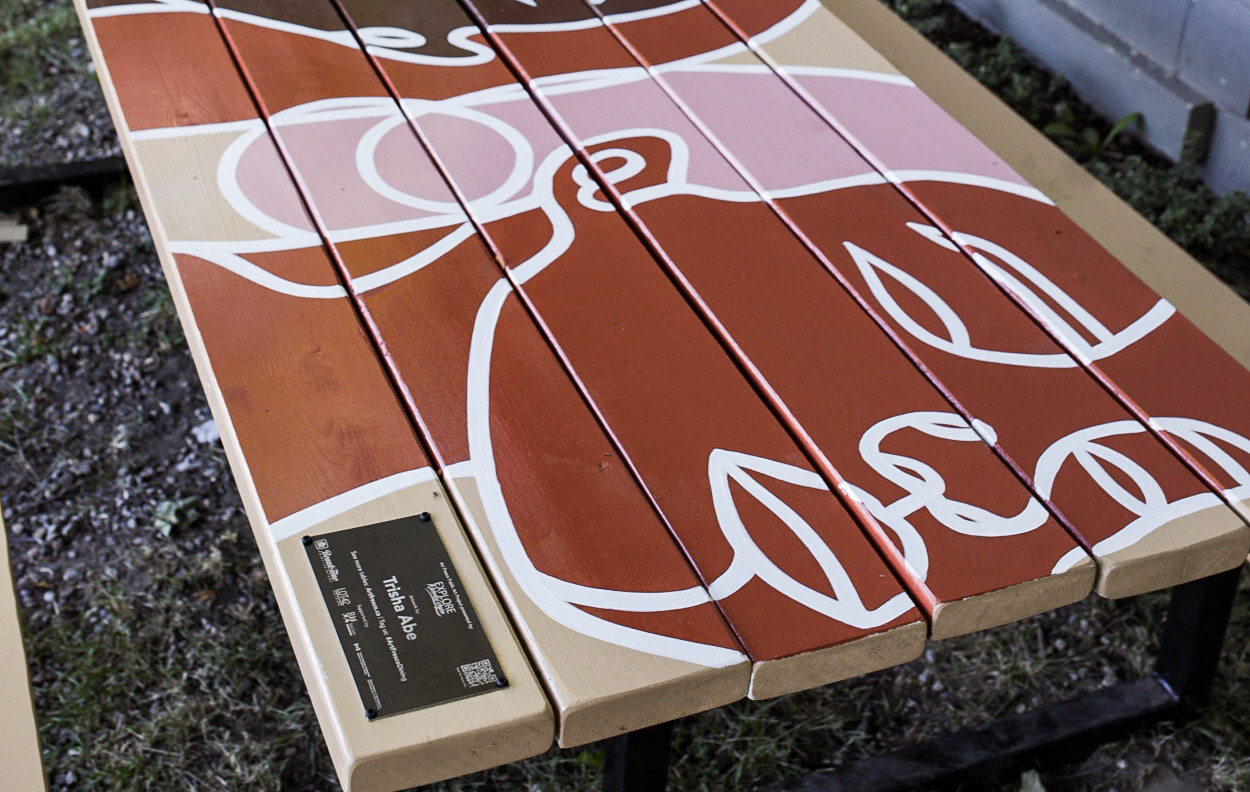 Bringing Art to the Table: Local Creatives Colour Our Community

In the past two weeks, brightly painted picnic tables have been delivered to eateries across Waterloo Region. The project is called Art Fresco, and it was led by Explore Waterloo Region, a division of Waterloo Region Tourism Marketing Corporation.

In the beginning of the COVID-19 shutdown, Waterloo Region’s local hospitality industry was severely impacted. As patios began to open back up in June, Explore Waterloo Region was looking for a way to support that industry. But of course, that wasn’t the only industry to see a dramatic decrease in business in mid-March.

“The visual and performing arts industry was severely hit and impacted by COVID-19 as well,” said Diane Murenbeeld, director of marketing for Explore Waterloo Region.

“It seemed natural to bring those two communities together to create this feel-good project that might help bring attention and allow people in the Region to go out and dine and support their favourite eateries in a safe manner.”

Explore Waterloo Region put out a call for artists in the community to submit an application to paint a picnic table that would then be distributed to various restaurants with outdoor dining across the Region.

Kitchener-based muralist, Trisha Abe, saw the call and immediately offered feedback, as she felt the initial application process was too extensive for a project that was intended to bring the community together. Abe created a Google Doc with her suggestions for proposed changes — she then submitted it to the organizers.

“They literally changed everything that I said was kind of problematic with the application, except for the pay, which was just a fixed budget,” Abe said.

“My argument was if you’re going to offer less in terms of money, you need to ask for less from the artist, and they understood that. I told them at the end of the day, if you make your application more accessible to different groups of people and new artists — diverse artists — it’s good for everyone.”

After the changes were made to the application process, Abe sent it to a bunch of her friends in the KW art community, and applications began flooding in. Abe was also offered consulting work after, to help build policies and guidelines around similar calls for artists in the future.

“We were fortunate that some of the artists were ready to give us some suggestions [about the application process], we modified it, and that really helped us bump up our number of submissions. Then we had a selection committee that we engaged with in order to do a review of all the submissions and see who we wanted to invite to the table, pun intended, to work with us on the project,” Murenbeeld said. 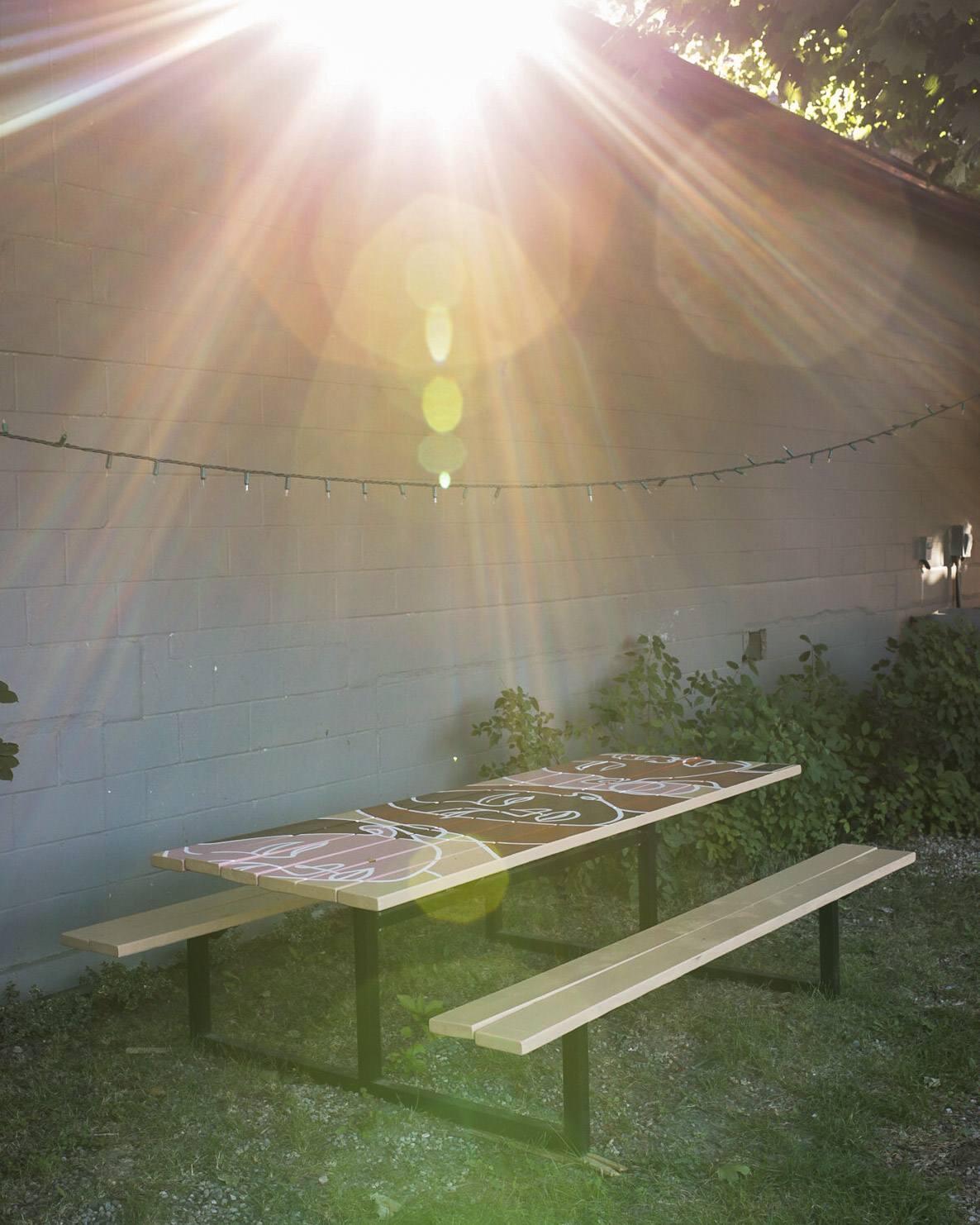 Artists from diverse backgrounds and mediums were chosen to paint tables — such as local favourites Luke Swinson, Alanah Jewell, August Swinson, Amy Esplen, Jon Johnson and of course, Trisha Abe. Esplen and Johnson, who are typically known for their graphic design work, were able to flex different skills by picking up a paintbrush, just like several other artists who don’t generally work with paint.

Over the course of two weeks in July, the group of almost 50 artists congregated in LOT42, where they could work at a safe distance from each other. Abe described this as a great experience where she was constantly surrounded by other creatives in a safe environment.

LOT42 donated the space and Home Hardware donated paint and supplies. This project also received funding from Regional Tourism Organization 4 Inc., and the federal government. The tables were built by St. Clements Trim Inc. and after they were done, a local auto body shop added an automotive-grade sealant to them. Then the tables were ready to be distributed.

To be considered as a location, restaurants had to be a part of Explore Waterloo Region’s WR United Campaign. Potential hosts were then drawn from that group.

Some tables were matched with locations based on aesthetic — for example, Anne Williamson’s table was inspired by the Cambridge Butterfly Conservatory, so it seemed like the right fit to send her table there. Jon Johnson’s table is at Short Finger Brewing Co., where his office is located. While the tables still belong to Explore Waterloo Region, these hosts are able to use them until this patio season is over.

The tables are scattered all over the Region, making for an incredible scavenger hunt this season.

“I think the reason I wanted to talk about this [project] is because it’s a great initiative. Especially for emerging artists — there were so many artists I saw where art is just a hobby or it’s part-time. A picnic table is not as intimidating as a mural … it’s a great starting project for a lot of new artists or a great transition project,” Abe said.

“Regardless of where [my table] goes, I think it’s just another cool way to incorporate art into the community.”

To browse the full collection go here to see photos of each table and links to each artist’s concept, reason for participating and background.