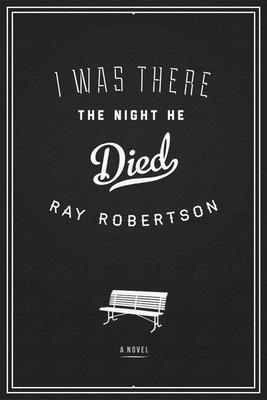 BOOK REVIEW: Ray Robertson – I Was There The Night He Died

I Was There The Night He Died
Ray Robertson

When I was considerably younger, I buried my head in books to figure out my place in the world – how it worked, what was worth pursuing and what was interesting. That often meant reading novels full of angry young men or by angry young men – whatever came close.

It seems we’ve gotten away from all that. Russell Smith, arts writer for the Globe and Mail says he “feels sorry” for young men now, as they are chronically underfed by the modern novel.

There are numerous exceptions to that statement, but I do see a kernel of truth in what he’s saying. However, I humbly offer Ray Robertson’s great new novel, I Was There The Night He Died as a testosterone-fuelled corrective.

Robertson has been around for years, with six novels and a couple essay collections to his credit.
The new book takes place in Chatham, Ontario, which Robertson says has “all the problems of a big city with all the inconveniences of a small town.”

Central character Sam Samson is a writer burdened with his father’s Alzheimer’s, spiraling debt and the recent death of his wife. His problem is simply that he’s drowning in his sadness.

Still, our guy sucks it up and gets on with caring for his father, leading him back to the small town of his youth, a place he left as soon as time would allow. Here, he comes upon a teenage girl, Samantha, and an unlikely friendship forms.

Recreational drug use, loneliness, and the shared desire to be anywhere other than where they are, fuel a staggered but sweet dalliance, and despite the pathos involved, you have to root for characters as human as this.

I Was There The Night He Died doesn’t read like a lot of Canadian fiction. It’s urban, has a lot of alt-country and obscure rock and roll in it, and it’s not trying to turn anyone into a better human being. It’s just a great story populated by some very real, very flawed characters.

Granted, no one who works for the Chatham Chamber of Commerce will be too thrilled, but I think many of the rest of us will remember fondly a life not too far removed from our own, and have a laugh on the way.