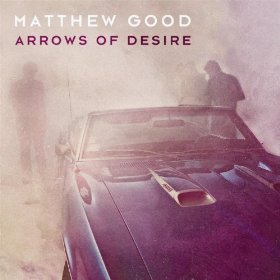 Canadian alt-rock super star Matthew Good is back with his eighth solo album, Arrows of Desire, and is taking a break from his record of creating anthems and expressing radical emotion.

Arrows of Desire doesn’t stand out among Good’s solo albums as groundbreaking, but, in a way, that’s what keeps fans coming back. The ability to push out consistent sounding albums year after year keeps supporters happy and takes them back to a time when ’90s alternative rock was alive and well.

Track to track, the album does well highlighting the few gems it contains, cushioning them among songs that are more easily skipped.

The title track instantly reinforces who you’re listening to, introducing the album with Good’s typical bellowing and 30-second guitar rifts. For longtime fans, expect to find yourself in 1999 when Beautiful Midnight was making its way into stores and hearts.

With only one ballad on the album, “Guns of Carolina,” it’s an obvious go-to for a second single off the album and a solid follow up to “Had it Coming.” Equally reminiscent of Good’s earlier work, this track would have been a welcome addition on albums like “Avalanche” and “Hospital Music.”

If there is one track that stands out on this album, it’s “Via Dolorosa.” Latin for Way of Sorrows, “Via Dolorosa” spouts symbolism and lyrics about facing personal struggle and mental battles. Poignant for anyone facing a personal battle, the track could likely stand as a personal anthem for Good who has battled his share of mental health issues.

Fans who have been with Good since day one won’t hesitate picking up this album, given its ability to fall in line with its predecessors.But new fans may do themselves a favour by focusing on his earlier works and moving down the line in time.