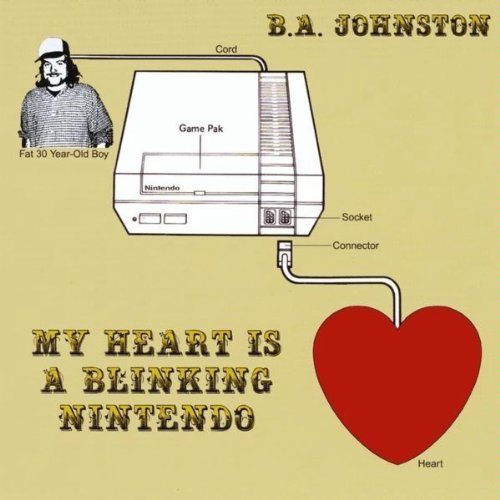 B.A. Johnston is labeled as “fat 30 Year-Old boy,” on the cover of his 2005 album, My Heart is a Blinking Nintendo. The ten-year anniversary of the album’s release was celebrated last month and for the occasion, B.A.’s label, Mammoth Cave, has issued a vinyl re-release of the recording. A new record, his seventh, is in the works for 2015.

“My Heart” opens the album, normally enough with a short, sweet thumper. With “I Love it When You Dressup”, though B.A. makes it clear that he won’t be pulling any punches. “I guess that somebody had to love dirt bags and scum balls, and I’m so glad that it’s you,” he sings on the track.

B.A. invites you openly into his life with songs about the deep fryer next to his bed (“Greasy Lullaby”), helper monkeys (“Theme From Helper Monkey”) and his thoughts on religion (“Jesus is From Steeltown”). B.A.’s melancholic openness about his lifestyle might be self-deprecating at times, but his cleverness and honesty provide the more memorable moments on the record.

Tongue-in-cheek love songs such as “Have Fun on Warp Tour”, “MVP” and “Female Kryptonite” cut the silliness, though B.A. never drops his language of video games and pizza. The whole album is filled a distinctly imaginative escapism.

The curious thing about B.A. is that you have to wonder whether he has a time machine. Do the math; while the breadth of his generation are being given ‘over the hill’ mugs, B.A. is living on the road and half naked and rocking (so I hear) in towns you’ve never heard of.

B.A., the Canadian sage, will be playing at the Jane Bond with Lee Reed on November 8 at 9pm. Tickets are $10 at the door.