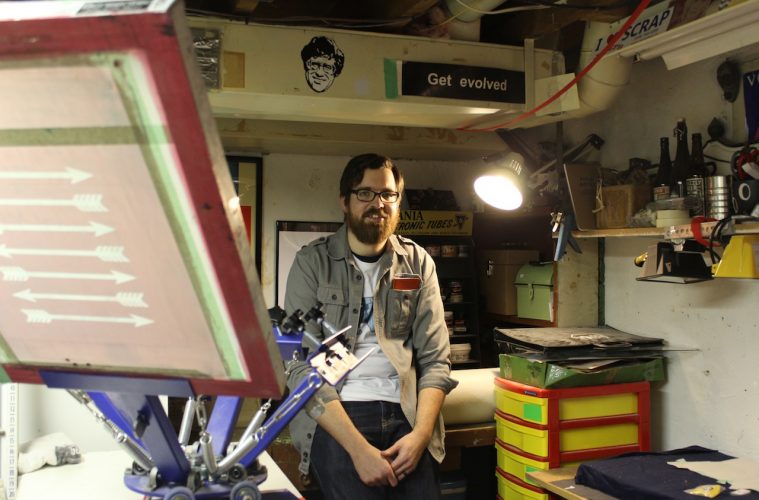 A grizzly take on design

For local artist Jon Johnson, becoming a graphic designer wasn’t always his plan – but a combination of opportunity and a DJ gig gave rise to a career, as well as his famous nom-de-plume, Bearface.

After completing a degree in English and film studies at Wilfrid Laurier University, Johnson was holding down jobs at the Princess Cinemas, Starlight, and Jane Bond. He was also casually browsing the blogs of other designers, including that of Aaron Draplin, an American artist who co-founded the Field Notes line of stationary.

“Around the same time I started reading Draplin’s blog, the person who was doing the film guide at the Princess Cinemas was leaving and I convinced John, the owner of the cinema, that I could learn how to do that. Then, John Kutt, who was doing all the posters at the Starlight was leaving and he told the owners of the Starlight and the Jane Bond that I could probably do his job,” explained Johnson. “So then they asked me to do an ad for the Imprint and I’ve been doing their ads and posters ever since.”

But it was his tenure as a one time DJ at Jane Bond that brought ‘Bearface’ to life.

“I started using that name as a joke, as a DJ,” said Johnson. “I started calling myself that as a joke when I DJed Halloween with DJ 88 at the Jane Bond. Then I just kept using it.”

Bearface abandoned the decks, but he kept the design work. Johnson has since built his brand into a successful graphic design business. He’s responsible for most of the beautiful gig posters promoting upcoming shows at Starlight Lounge in Uptown Waterloo, as well as for a host of other clients. He has also done branding and advertising for clients as diverse as Taco Farm, Whiting Design and the City of Kitchener.

He has also branched out into screen-printing under the moniker BRFC.

Handkerchiefs, t-shirts, coasters, and placemats are just a few of the items that Johnson screen-prints before taking them to market at events like Stitch n’ Kitsch, a local craft market, and Kitchener’s downtown art market.

Bearface continues to grow. Johnson has developed a sub brand for kids called Cub, and is collaborating on a brand called Ours – French for bear – with his wife Jenna.

“Another part of my design process is that I always run things by Jenna. It’s handy to get feedback and have somebody to bounce stuff off of,” said Johnson.

Relationships have been vital to building Johnson’s career.

“I’ve done a lot of things and met a lot of people and it seems to have paid off,” said Johnson. “The friendships that I’ve made for other reasons sometimes turn into something that leads to something. I don’t know if it’s that people like my work, or they like me, or both but it’s kind of great.”

Beer drinkers can even see Johnson’s designs on bottles of the “Frost Quake” beer from Wellington Brewery..

What else can we expect from Bearface?

“I never know what’s next because what’s next is somebody saying ‘Hey, I need this,’” explained Johnson. “I’m just a guy who was like I like design and then I taught myself how to make things look a way I thought looked good and then other people said ‘Hey, that looks good.’ I like doing what I’m doing. I love the fact that when I want to screen print, I just go into my basement. I just want to keep doing that.”

Live to Read, Read to Live
Originally I needed a screen saver so I just made my own. I’ve always loved motorcycles and ‘Live to Read, Read to Live’ comes from the classic phrase ‘Live to Ride, Ride to Live,’ so it’s been a motif that’s been in my head since I was a kid. At some point after posting it online I found it on Tumblr and found that it had hundreds of reblogs. I redid it for the outdoor book event where Mandy Brouse from Words Worth Books saw it, and now the shirts are in my favourite bookstore. I did it because I’ve always loved reading and it’s something that supports that.

Frost Quake, Wellington Brewery
If I could design for anything, it would be beer. I really love small businesses and I love the mentality of craft breweries. I met one of the guys who work at Wellington Brewery and this past year they started doing a one-off series. We started talking about they labels and I mentioned that I do graphic design. On my birthday, I got an email from them asking me to do a label for them.

Holiday shopping poster, City of Kitchener
I made the City of Kitchener a poster that I would make, the way I want. It’s not a ‘city’ poster at all. I did something for their New Years Eve event and that was directed by them but everything that I’ve done with the City of Kitchener or the [business improvement area] is how I would like to see it. They’ve said they like the way what I’m doing looks so I just keep doing it. When it comes to the style of my work, what I’m doing for them is just what I like doing. My process with a lot of these takes time. I look for inspiration and rough sketches and then I put together reference material and build things from there.