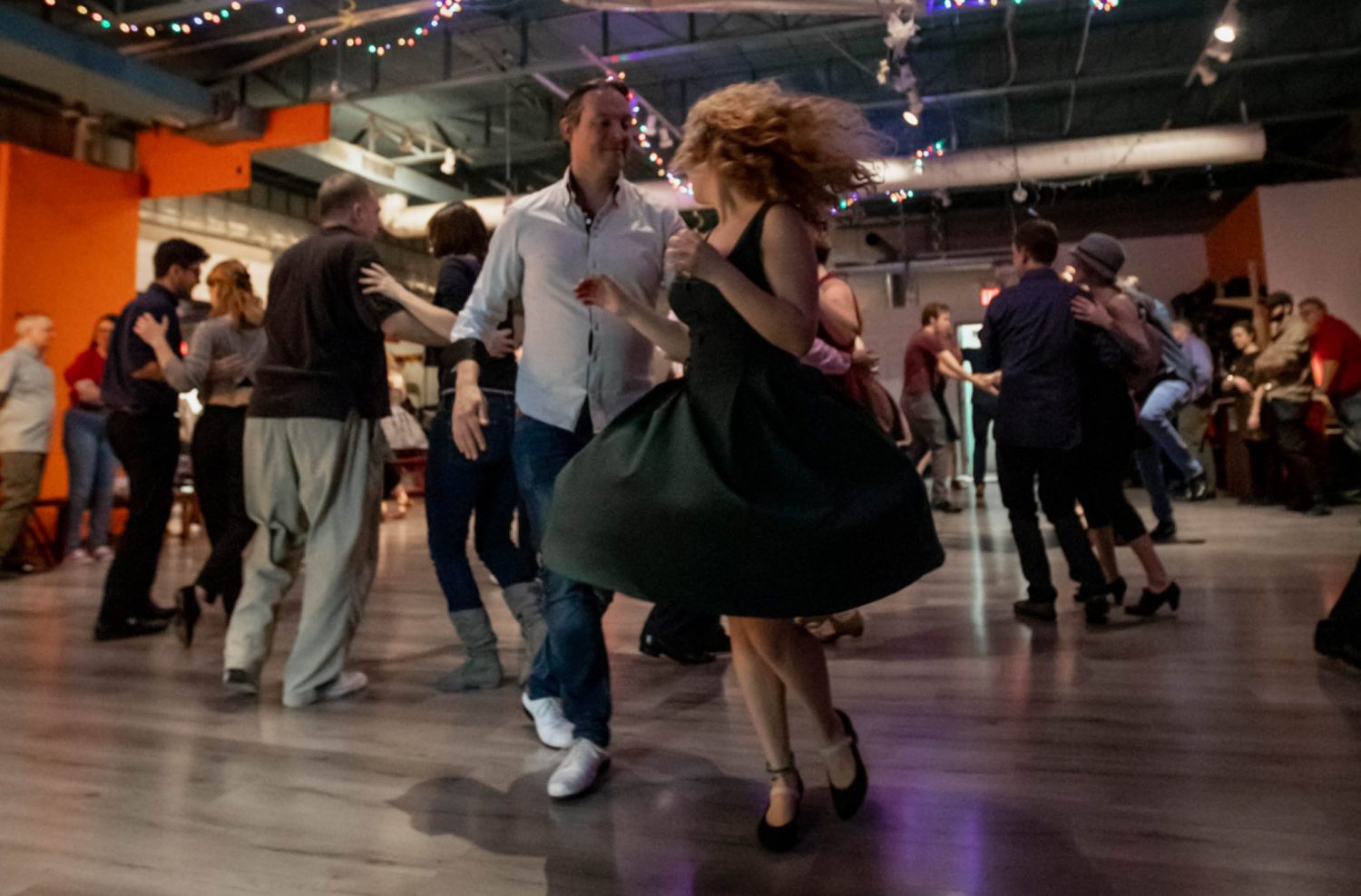 100 Years Later, We Still Got That Swing

There was a time when the weekend was less about Netflix and chill, and more about jumping, jiving and wailing — a.k.a going out to swing the night away to the jazz music of the 1920s big bands.

Born in Harlem, N.Y. in 1928, the Lindy Hop, in particular, took off across North America and Europe. Later, defiantly cheering up a country beaten down by the depression.

Although its true origin is unknown, the Lindy Hop was danced by predominantly black dancers in the 1920s during the Harlem Renaissance. It became synonymous with swing dancing and was appropriated into white Hollywood. As many dance fads do — swing dancing eventually disappeared.

And then a funny thing happened. It came back in the ‘90s.

Fast forward to today. The joint was jumpin’ at Hepcat Studios in uptown Waterloo on a recent Monday night as people twirled, spun, jitterbugged and did the Lindy Hop to the live jive band, Alex and her Alleycats. The dancers —  who ranged in age from teenagers to retirees, many dancing with the same gender, switched partners as often as the band changed big band tunes —  were breathless and exhilarated.

“Initially back in the early ‘00s we were just finding gyms and community spaces and dancing in bars,” says dancer Matthew Wieb.

The dancers reminisced of times past, back when Jeff Benoit and Kristen O’Neill ran Addicted to Dance and Swing Riot and were the ring leaders of the Waterloo swing dance scene for many years before retiring. They were the ones organizing the weekly dances at different bars in the Region: The Bomber, The Vault, Caesar Martini’s (which burned down), The Huether and The Jazz Room to name a few.

“The reason we dance on Monday nights is because that’s the slow night at bars,” said Wieb. “Swing dancers aren’t particularly good at drinking alcohol but we do look interesting.”

About 10 years ago when Jeff Benoit retired from the scene, the Hepcat Swing community came together. A few dancers created the not-for-profit organization, secured their space and started offering weekly social dances and classes with a focus on getting live music and local bands.

So why does swing draw in a crowd too young to remember the dance’s jazz beginnings from 100 years ago you may ask?

“Of all the social dances it’s the friendliest because it’s not stuck with one partner, in fact, the culture is that you switch partners almost every dance. So that makes it very open to people who are just looking for a place to meet people and socialize,” said Wieb.

“I love how I feel when I’m dancing. I love how it can relax me and just take away all my stress and worries in the world and it’s very good exercise and you can’t beat the community. Some of my closest friends I met swing dancing. In fact, my husband — I met him through dancing,” Connie Walz said. 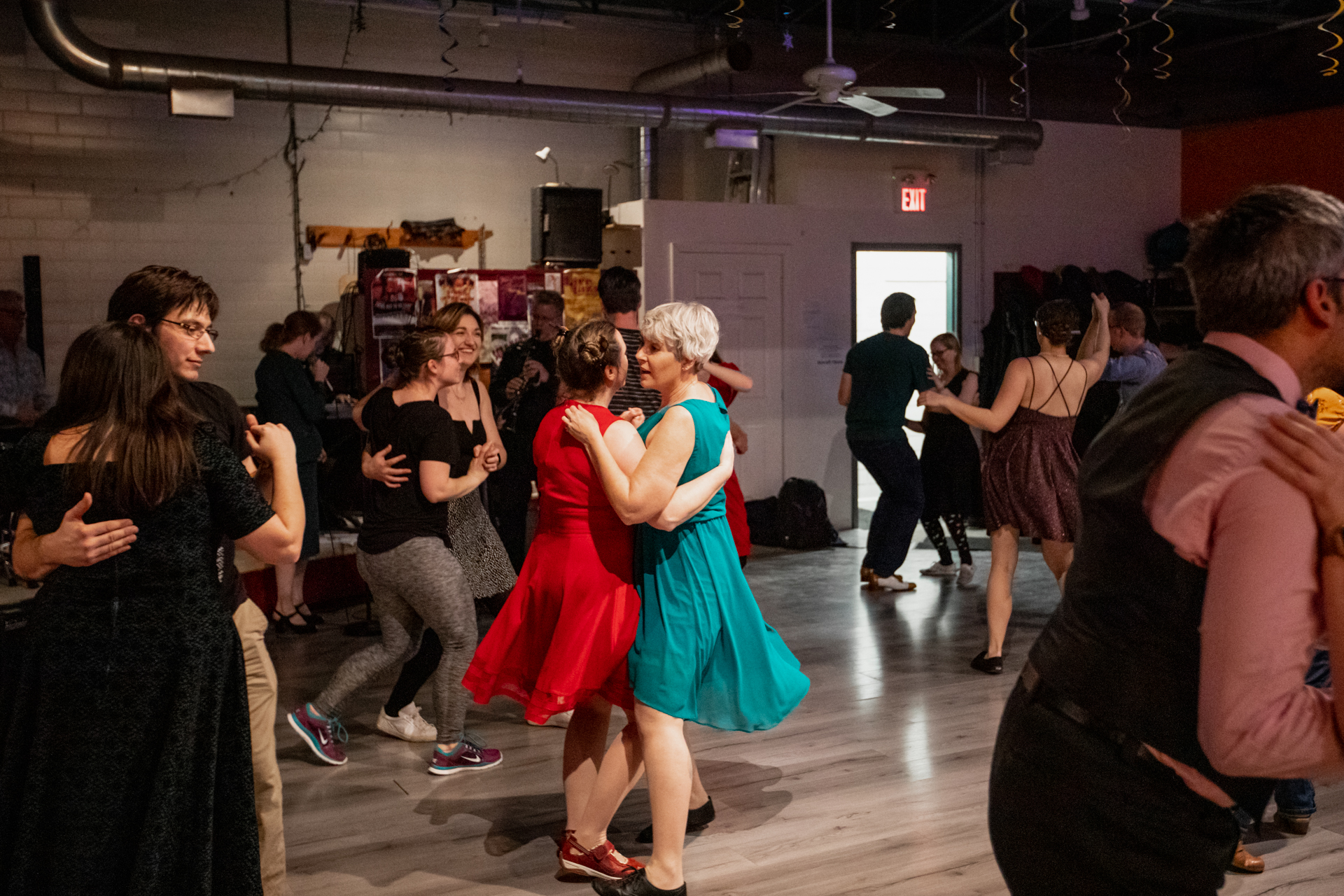 Swing has always been about freedom and expression. With roots in West African culture, swing dancing originated in Harlem back in the jazz-era of the 1920s alongside prohibition and it broke all the rules of traditional dance. The big swing bands led by Duke Ellington, Benny Goodman and Count Basie brought together black and white musicians in a new social amalgam that decisively changed North American culture.

Musically, swing offered rhythmic flexibility. Marked by a subtle swaying and a living pulse, which came from musicians playing just ahead of the beat enough to be syncopated, or dragging behind it enough to be bluesy. They referred to this as “swinging the beat” and hence the name was born.

For a long time, the dance itself had no special name. Then, in 1927, Charles Lindbergh crossed (“hopped”) the Atlantic. A dancer, when asked what the dance was called, remembered the headline and replied impishly, “the Lindy Hop”. For whatever reason, the name stuck.

In the late ‘90s, partnered social dancing began to make a comeback, and dance classes became extremely popular, particularly on university campuses. Back in 2001, swing dancing re-emerged globally as a popular mainstream phenomenon thanks to bands like The Brian Setzer Orchestra and Big Bad Voodoo Daddy with the notorious GAP commercial marking the height of its re-popularity.

Since then, the Waterloo Region swing scene has seen many changes over the years, but people keep coming back according to Hepcat — they’ve even made quite a name for themselves out there in the wider swing community:

“We’re known across North America for our Waterloo style of dancing because Jeff [Benoit], who started it, had this very unique, very stretchy yummy style of swing and blues. All of our swing was very slow and very gooey,” Walz, who’s been dancing for over 15 years in the region, said.

Teachers at Hepcat Swing hold a beginner lesson every Monday to learn the basics of swing dancing an hour before each month’s dance. Dancers rotate around circles so that everyone gets a turn to dance with somebody else. All ages are welcome. They also teach all levels Lindy Hop, blues, East and West Coast swing, Balboa and Charleston on other days. See their website for more info.

“We’re open to different genders and different orientations. We are trying to break down the lead/follow gender biases and really encourage people to dance with the same gender. Or, if they have the chance, take the opposite from the traditional role, learn both roles —  you’ll be a better dancer if you know both,” Wieb said.

Although dance is the main magnet for most people who come to Hepcat, music is what brings people together. The same music from 100 years ago.

Local bands ranging from Jazz singer Alex Pangman and her eight-piece band the Alleycats, The Royal City Big Band, the Roberta Hunt Trio, to the grassroots string band the Ever-Lovin’ Jug Band. On nights they can’t get a live band, DJs play the swing-era jazz music that keeps the crowd on their feet.

“There’s so many people that just want to get out dance, especially in the winter because there’s not a lot to do,” Chambers said. “But we’re here to love the music and express the music and as long as you’re having fun and no one gets hurt you’re not doing it wrong.”

With a grin and a shrug, Wieb adds, “and the band swings.”