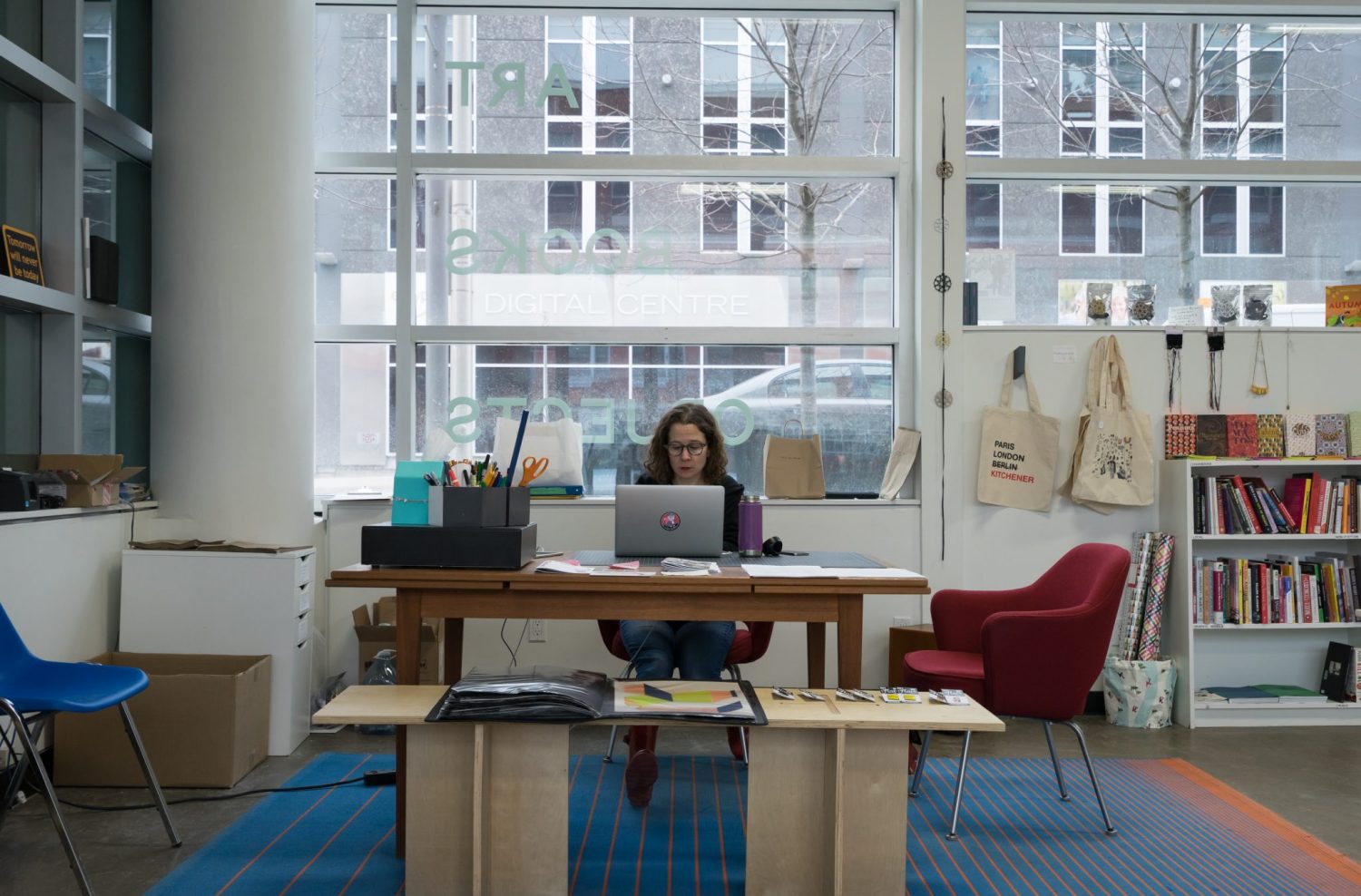 Open Sesame’s owner, Lauren Weinberg, did more than just open an art store. Though the shop has been open for only two and a half years, it’s hard to imagine what downtown Kitchener would be without it now; the book store/art gallery/zine library/music venue/event space has quickly become a cultural hub in the downtown core and a voice for social justice in Waterloo Region.

With a feminist, progressive mission, Open Sesame is a source of books, publications, household objects, art and events that might struggle to find exposure and audiences otherwise. Weinberg and her team – exhibit curator Sarah Kernohan, along with JoJo Worthington, Elsa Ruck, Candy Young and Graeme Ruck – are intentional about filling a gap in the Region’s art, music and literary communities by offering an accessible space for a variety of different events (live music to Wikipedia Edit-a-Thons to poetry and literary readings), and by welcoming and encouraging works and submissions from local and under-represented artists.

“I would really love to be more inclusive, in our exhibition program, in the merchandise we carry, so anyone is welcome to talk to us if they have books or art or whatever it is they want to share, but we are especially eager to have things by artists from marginalized groups,” Weinberg said.

An American expat settled in Kitchener-Waterloo for the past four years, Weinberg’s dedication to an inclusive, accessible space and inventory seems to stem, in-part, from her own learnings about her new home. Moving to Canada, she said, she was surprised to find that Canadians don’t really like to talk about the huge problems like racism, sexism, homophobia, economic inequality — among others — that still totally pervade our communities — at which point in our interview I laughed because, uh, yup.

When it comes to her own responsibility as a community member and small-business owner, Weinberg strives not to settle just for marketplace feminism and social justice (i.e. wearing your activism), and makes a real effort to take action. She cites the “Future is Female” shirts that Open Sesame carries and frequently re-stocks: she has committed a percentage of the proceeds from the shirts to donate to the SHORE Centre. The store was also an official co-host of this year’s Women’s March where they provided free hot apple cider and doughnuts to participants. 100 per cent of the proceeds from their sales that day went to the Sexual Assault Support Centre of Waterloo Region’s Male Allies Program.

“Literally every dollar counts,” Weinberg said, in the context of small business ownership.

Corporations like Amazon and Walmart drive down how much people are willing to spend on anything, the effects of which primarily trickles down to small businesses (see: the empty storefronts littering up and downtown), but the value of supporting local small businesses is magnified when, as in Open Sesame’s case, they are also giving money back to the community, supporting local artists (the store carriers works from a number of University of Waterloo Master of Fine Arts grads, for example) and holding space for important voices and conversations that might not otherwise be getting much airtime.

Weinberg is grateful for the support that Open Sesame has received, but also acknowledges that Kitchener-Waterloo could be doing a lot more to support the arts more generally. She questions the Region’s obsession with STEM (science, technology, engineering and math), and what it means for our economy, noting several studies that demonstrate the arts’ importance for the long-term economic health of a community.

“By focusing exclusively on tech, which it seems [the City] is, you are not making this a city where everyone’s going to want to live,” she said.

Supporting the arts isn’t all about economics, though. For Weinberg, art offers something more, something that isn’t necessarily quantifiable. Art builds empathy.

“Thinking of my own experience in developing a sense of social justice and the desire to see a better world,” she said, “it’s all from reading, from seeing art exhibitions, from learning about something from someone else’s point of view.”

“I guess I am always trying to read and educate myself about these issues, as a newcomer and a settler, and I wanted to have books and publications that would let people do the same,” she said.

If you haven’t already, check out the current exhibition by Kitchener-based artist Robert Achtemichuk at 220 King Street West in Kitchener; scope their upcoming events on their Facebook page, fist-pump your way through their Twitter feed, or support them with your online consumer power.