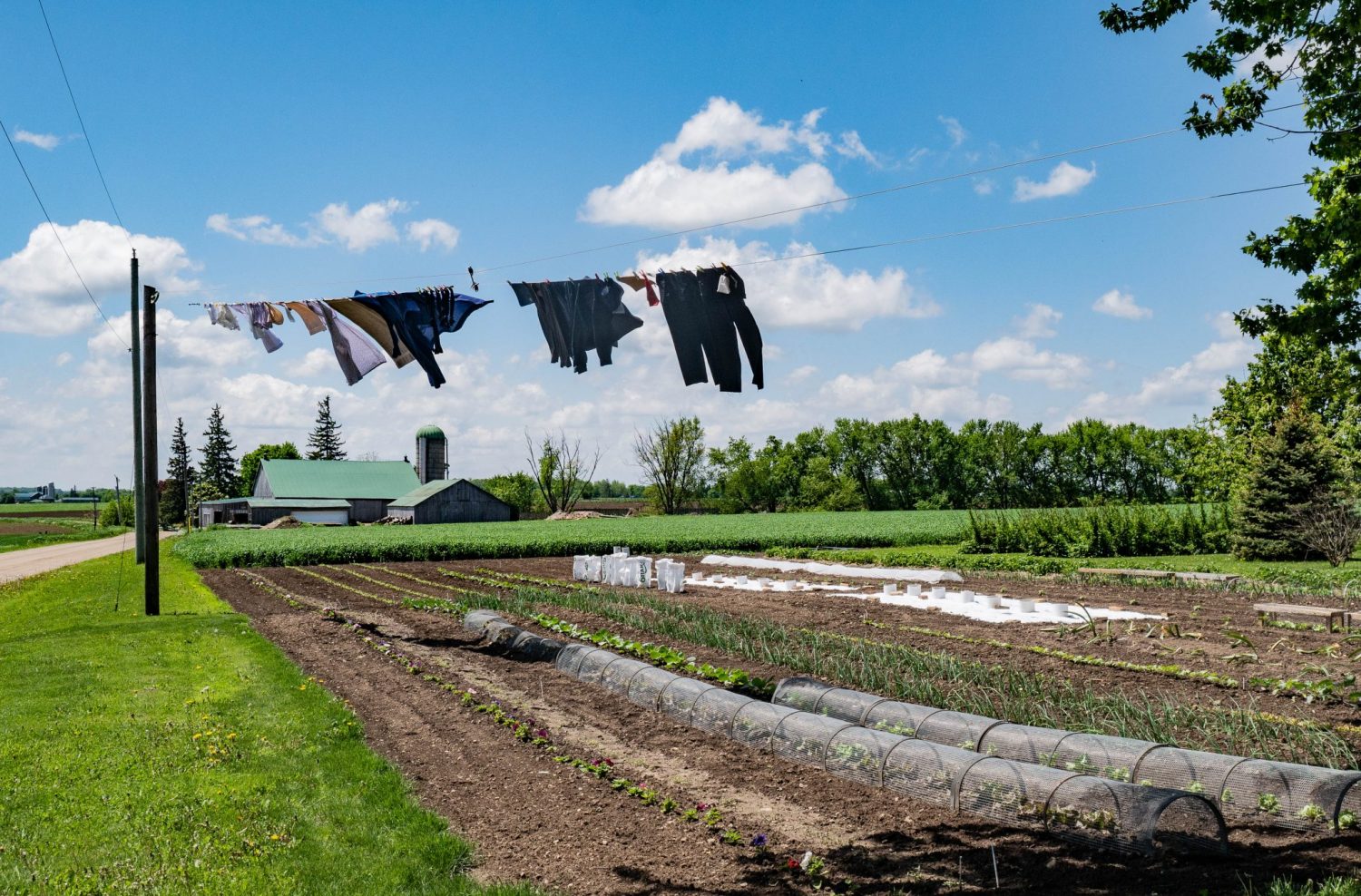 Esther and Wesley Weber welcomed our group of eight into their kitchen where the table was set with light refreshments. Typical of an Old Order Mennonite lunch, Esther stacked thick slices of homemade whole wheat and white bread at the head of the table, intending to be layered with rich butter, cheddar cheese and summer sausage. Sweet pickles, carrots and apple juice complimented the salty foods.

I don’t doubt there is enough bread, cheese and meat to feed us all twice over.

We arrived at the Weber farm, just south of Elmira, by way of the Waterloo Central Railway from St. Jacobs Market. Once we disembarked the train in Elmira, a tractor-pulled wagon bumped us through the town and private back lanes to the Weber’s 100-acre property that has been in Wesley’s family for four generations.

Old Order Mennonites are a visible presence in Waterloo Region, known by their horse and buggy transportation, dark clothing and ability to live separate from society. But few people have regular interactions with the closed community unless you are a relative or have regular business dealings with local families.

The “Mennonite Excursion” that brings me to the Weber kitchen is a partnership between the WCR, the Elmira BIA and Kitchen Kuttings, an Elmira-based food shop that specializes in cheese and sausage. Esther and Wesley Weber, the Old Order Mennonite couple who offer their kitchen table as a place to learn something about Old Order Mennonite culture and history, were also integral to this experience.

Once everyone had enough food on their plates, Esther pulled up a kitchen chair beside the counter and Wesley settled beside the wood burning oven that dominated one-third of the room.

“So, what would you like to know? What questions do you have about Mennonites?” Wesley asked.

For the next hour, Esther and Wesley answered questions and told stories: how they met and married; why the youngest son gets to take over the family farm; how the community deals with medical care and education since they don’t pay taxes for government services; how families take care of their elderly at home for as long as possible; the changing nature of farming for young families as land in southern Ontario becomes more scarce and more expensive; what the singing sounds like in their churches; how they make a living; whether or not they play musical instruments and how young people decide to become church members.

Neither Esther nor Wesley shied away from questions about the roles of women and men in the community.

To the Webers, an invitation to their home on a Thursday morning is more than just a food sampling. In 10+ years of welcoming visitors to their kitchen, they have hosted people from across the globe, as the collection of international fridge magnets can attest.

“It’s an opportunity for a cultural experience and we like learning about other people, too,” Esther remarked.

I learned a lot that I didn’t know (or had forgotten) about my own community and cultural heritage. The wall clock in the Weber’s kitchen chimed on the quarter hour just like the clock in my grandmother’s house. Grandma Metzger was an Old Order Mennonite and I grew up with Old Order Mennonite aunts, uncles and cousins. But that’s not an automatic pass toward full cultural understanding.

Take it from me, there is “plenty more” to learn about cultures in your own backyard when there is the opportunity to travel down a farm lane for a conversation at the kitchen table.