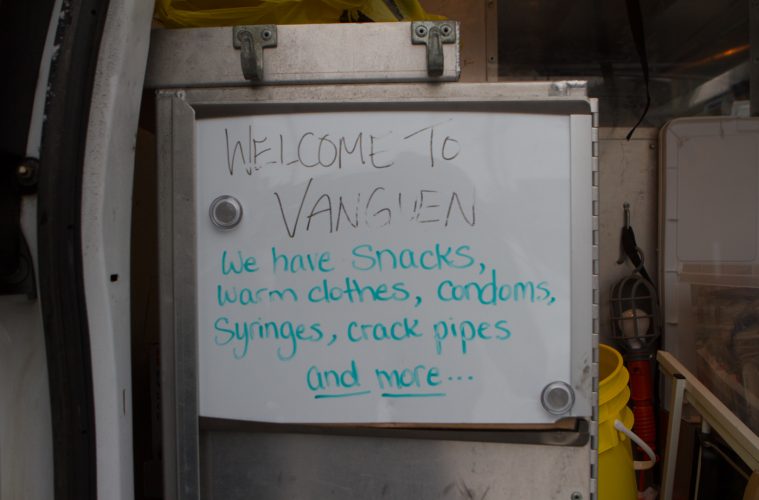 Driving with the Dragon

On Thursday evenings around the time that most of us are trudging home through the snow and hunkering down for nightly hibernation, a group of workers from Sanguen Health Centre in Waterloo are loading a van up with hot chocolate, snacks, warm clothes and harm reduction kits, and getting ready to hit the streets. Sanguen’s Community Outreach Van, or Vanguen, as it has been affectionately dubbed, is a new mobile outreach project that has been unofficially underway since the beginning of December. Each Thursday night they spend three hours on the road and at several sites across Kitchener-Waterloo, connecting with individuals who have otherwise limited access to support services.

“From a social work perspective and from an outreach perspective, it’s nice to make connections with people who we’ve never seen. Ever. People in the community who really need connection,” says Pete McKechnie, a social worker at Sanguen. Though its schedule hasn’t been formally advertised, over the past two months community members have grown to know and expect the van, and at each stop its staff are now greeted by waiting, increasingly familiar faces. The van parks for 45 minutes and Sanguen’s staff get to work. Those staff include a mobile outreach worker; a hepatitis C nurse; McKechnie; and Manager of Outreach, Education and Prevention Services, Violet Umanetz. At each stop they hand out mugs of hot chocolate, offer on-the-spot hepatitis C testing and referrals for treatment, as well as provide snack-packs and basic needs items such as toilet paper and toothbrushes. All the while they are learning about the needs of the population they aim to serve.

Sanguen Health Centre supports individuals with and those at risk of getting hepatitis C, through testing, treatment, support, outreach and education. Their mandate is specific to marginalized populations and a harm reduction philosophy shapes their work, which aims to reduce harms associated with drug use in people unable or unwilling to stop.

But health and safety look different and are differently accessible to different people. Many of Sanguen’s clients and potential clients live with a complexity of factors that impede their access to service: housing and income insecurity, and limited access to transportation, for example. 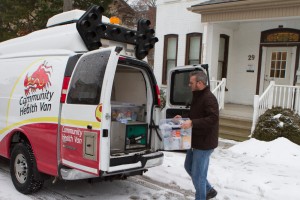 On the street, “chasing the dragon” means getting high on heroin, while successfully treating hepatitis C is called “slaying the dragon.” Whichever path folks are on, says Umanetz, “Sanguen aims to keep them safe.”

Despite outreach projects such as a weekly clinic at St. John’s Kitchen and home deliveries of harm reduction supplies, Umanetz says that the staff at Sanguen realized that “there are a lot of people who are not in downtown Kitchener who are not on our radar.” The need for mobile outreach was identified as a way for Sanguen to do its work “in a way that actually works for the people we’re trying to reach,” she explained.

Over 100 people visited the van in its first month and Umanetz describes the range of people who accessed the service as “youth and seniors and everyone in between. All ethnic backgrounds, all ages.”

The van was initially intended to bring harm reduction supplies, and a safe disposal site and testing to the community. That focus remains, but Umanetz says that they have been overwhelmed with requests for basic needs, like toothbrushes, socks, Q-tips, tampons and basic health care. It’s been a profound indicator of the service and accessibility gaps in our community, which Sanguen is aiming to fill by developing partnerships to expand the services and resources offered by the van.

“We’re looking to meet people who don’t have access to a lot of services,” Umanetz says.

“And we’re in there saying to them, ‘What do you need? We’ll find a way to make that happen.’”

Sanguen has funding for the van’s first year and has already expanded the mobile outreach project, having added a second night each week in January. When I spoke with Umanetz, they were working on plans to bring the van to Cambridge one night a week starting this month. So far the project has been warmly received by the community. When I asked Umanetz about possible backlash as the project grows and gets more publicity in the coming months, she stressed that there is nothing controversial about the van.