Andrew Thom, of Unicorn Brew Bar, really loves coffee. Comparable to how a painter lights up with passion when talking about art, or how a musician can’t be without their instrument, Thom approaches his passion for coffee as a lifestyle as opposed to an occupation.

When I walked into Thom’s apartment, the room off his kitchen was filled with coffee, coffee brewing accessories, and various drinking vessels. As a barista without a cafe, the apartment has become Unicorn Brew Bar’s home base.

“I do pop ups, only,” Thom said. “My end intention is to open a brick and mortar cafe, which I’m actually in the process of doing right now. So this was a way of me feeling out the community’s response to the caliber of coffee that I wanted to promote and the different roasting styles that I wanted to share.”

When Thom says “pop-ups” he means that he sets up temporary shops in various locations around the region. Unicorn’s first pop up was at the 2016 NIGHT\SHIFT, and since then, he’s been seen brewing imported coffee at Legacy Greens and Unity Baking. Pop-ups allow Thom to start his business at his own pace, while covering the cost of his obsession with coffee. 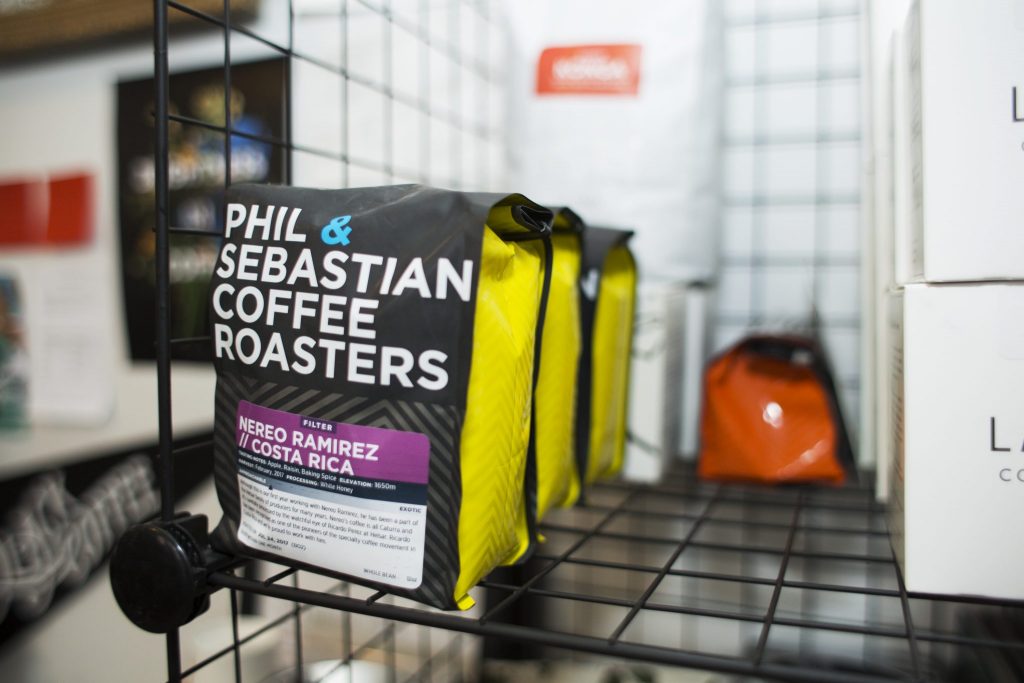 “This was a way for me to nerd out and practice my skills and kind of become more familiarized with different kinds of coffee, train my palate more. My intention is to be in this industry probably for the rest of my life,” he said.

Thom’s been working with coffee for 13 years; he started at a small cafe in New Hamburg in his late teens, then took on more roasting jobs when he moved out west. When he returned to KW, he managed Death Valley’s Little Brother and then roasted for Smile Tiger before realizing that to reach his goals, he had to be his own boss.

“I realized I had hit the ceiling, and I couldn’t go any further with what I wanted to do and I knew there was so much more in coffee that can be done and explored and so this was just the only way to do it – to start my own business.”

He wanted to make coffee without making compromises or having any limitations. He also only wanted to source from responsible and ethical roasters. Where the coffee is coming from is vitally important to Thom, and the only way to monitor that was to own his own business. 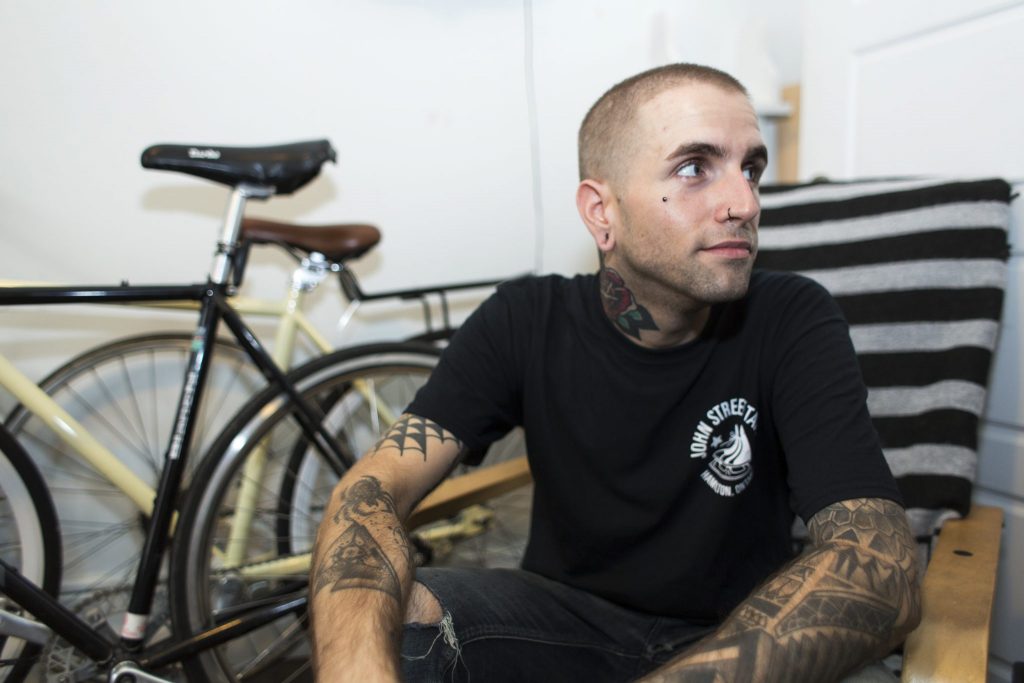 When I asked Thom what makes a great cup of coffee, his response was much more complex than I had expected. He said, “It’s the whole line. From farm, to roastery, to cup.”

He explained that most inexpensive coffee is sourced through strip harvesting, which is where the coffee cherries are stripped without any consideration if they are of uniform ripeness. As a result, unripe coffee seeds need to be roasted darker in efforts to mask an unpleasant taste.

“Most people don’t roast light because the grade of coffee you need to roast light and make good is usually a little higher price than they want to spend, so they go for a more dark blended approach to roasting because that covers your trail,” Thom said.

“The difference is how they harvest it, the amount of care they put into the drying and processing of it. If you have really carefree people drying your coffee, it can rot, it can get bugs, and that will affect the flavour,” Thom said. 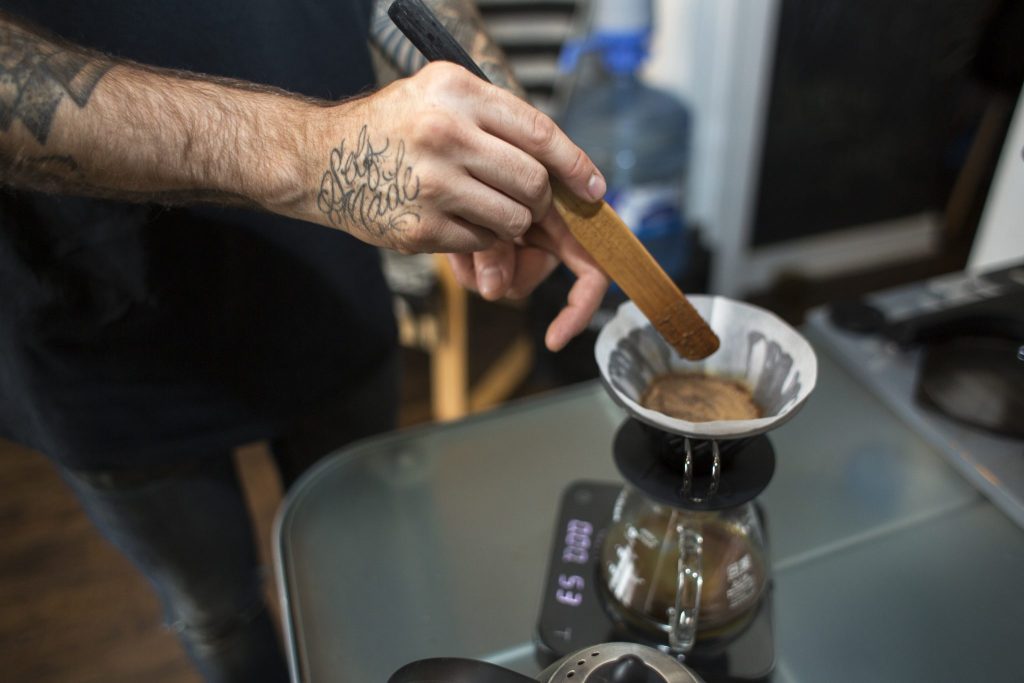 “The roasters that I bring in, they all source very very selectively. Most of them do direct trade with the farms or are partial owners of the farms and invest in the communities that surround it.”

La Cabra is a coffee roasting company from Denmark, whose coffee Thom imports in and brews at his pop-ups. Thom said that they pay 40 per cent above asking price and approach roasting with ethics that Thom is aligned with.

“There’s a lot of privilege in coffee and if you’re not offsetting that, you’re basically part of the problem: keeping these farmers stuck in poverty, barely breaking even every year.”

Within the next few weeks, Thom’s cafe, Show and Tell, is expected to open on Ontario St. in downtown Kitchener. Alongside his business partner, Chris Tellez, Thom is hoping to continue to provide the region with carefully selected imported coffee and challenge the tastebuds of those he serves.

“There’s no way people just don’t care about this, they just haven’t tasted it yet,” Thom said.

Show and Tell and Unicorn Brew Bar will still remain two separate entities. Show and Tell will be a full service cafe with pour overs, full espresso service, drip coffee and plant based food options. Thom and Tellez hope Show and Tell will act as a common space where people can come together and have conversations about coffee, whereas Unicorn will remain as an elusive pop-up, much like the name suggests.

“I’m still going to keep Unicorn running; I’ve found this is a really good way to explore this region’s response to this sort of coffee.”