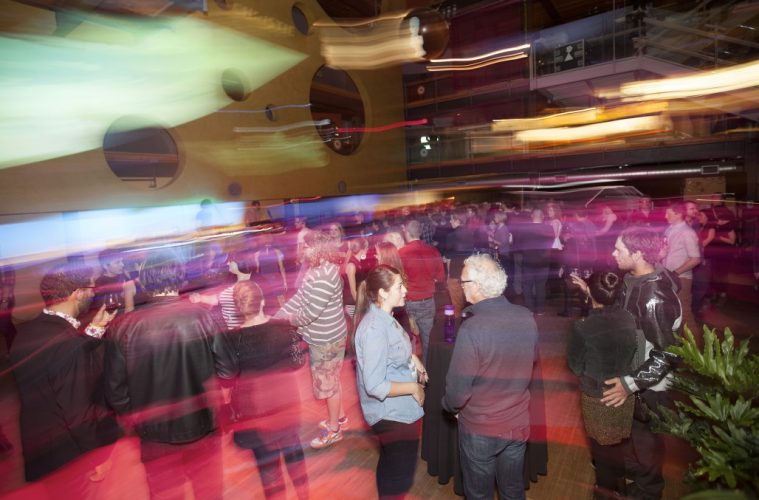 An odyssey into music and dance

In the words of HAL 9000 from Arthur C. Clarkes Space Odyssey series, not being at THEMUSEUM Saturday “could only be attributed to human error.”

Kitchener’s THEMUSEUM held a function on Oct. 25 as the first of four events in the Christie Entertainment Series. Inspired by the 1968 Stanley Kubrick film 2001: A Space Odyssey, the event — called 2001: A Space Odyssey Art & Music Experience — was described as “a cosmic & hypnotic electronic dance music party.”

“Part of it was to expose THEMUSEUM itself and its exhibits,” said the director of sales and strategic initiatives for THEMUSEUM, Meaghan Hawkins.

The event is part of THEMUSEUM’s “after dark” programming aimed to attract people to come to the museum after hours.

“We’ve noticed a change in museums a few years ago and for sure we have been ramping up our after dark programming. We’ve done a lot of stuff before, but this year we decided to do something new and Christie allowed for us to do that.”

With the programing organized around Kubrick’s critically-acclaimed film, the evening saw a replica of HAL 9000 and the Monolith from the movie and even costumed ape performances that came out onto the dance floor throughout the evening.

“When the apes hit a certain mark on the floor, that’s when the music would start,” said David Marskell, CEO of THEMUSEUM. “The whole thing is a production.”

Young Offenders Collective, a Toronto-based art collective that “produces art for brave minds,” provided props for the evening. They host various events throughout the year, one of which is always based on a Stanley Kubrick film.

“They’ve done The Shining and A Clockwork Orange and this year they decided to do 2001: A Space Odyssey. It worked well because the TIFF Bell Lightbox is doing their fall exhibit on Kubrick and his films,” said Hawkins. “[Young Offenders] were hosting their event anyways in September and so we called them and asked if we could check it out, which ended up being awesome so we asked them to bring it here.”

Marskell said beginning the four-part series with A Space Odyssey was the best route to take.

“We specifically led with 2001 because it’s cool. It’s got an appeal across a group of people and it’s something we can have fun with. I thought it would be the one to bring the most people out.”

Going into the evening, Marskell said THEMUSEUM had received around 200 messages from people saying they had planned on attending the event. He hoped they might even be able to “sneak our way up to 300.”

According to Hawkins, one of the biggest hopes for the evening was to show that THEMUSEUM is still “relevant.”

“It’s their museum — it’s a community stage and I hope that people see the different exhibits we have and think about us as a cool place to go and hangout,” she said.