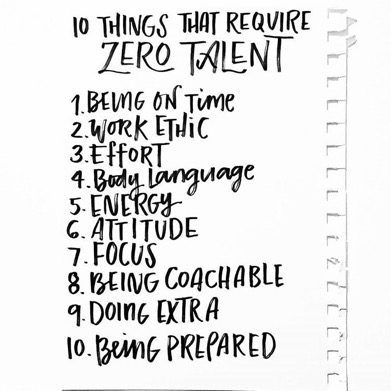 There’s a meme going around the internet that lists “10 things that require zero talent.” Sounds great. Just make sure you have those 10 things — after all, you don’t need any talent at all to have them — and you’ll be on the road to success. Except that life isn’t that simple for everyone.

There are slight variations in some versions of the list, but the 10 items are: being on time, work ethic, effort, body language, energy, attitude, focus, being coachable, doing extra and being prepared.

Perhaps demonstrating these 10 attributes isn’t so hard for many people, but there are other factors that come to play in life than talent, like health, social connections, education and wealth.

I’m a white, straight male, raised in a comfortable middle class home, and I’ve enjoyed good physical and mental health. I’ve had the advantages that privilege confers, making it much easier to get ahead. While I doubt the original author of that list intended to slag anyone, they have overlooked many people in the community who don’t have those advantages.

According to the Kitchener-Waterloo Community Foundation’s 2016 Vital Signs report, one third of Waterloo Region residents have “experienced limitations in participating in activities due to a physical or mental health problem expected to last six months or longer.” That’s a pretty substantial percentage of the population.

Looking at people’s sense of belonging, the report indicates that one in five residents perceive that the Region’s programs are not in touch with the community. The report notes that “those with a weak sense of belonging are more likely to think the Region is not in touch with their needs. Although residents think the Region is a safe place, over recent years levels of trust have declined.”

How might these factors affect whether one can demonstrate those 10 “no talent required” attributes? Maybe I’m naïve, but I think most people do their best, most of the time. In my role with a non-profit organization in downtown Kitchener, I’ve helped many people for whom some of the items on that list are hard to demonstrate every day.

For example, if you are a single parent and have to take one of your kids to school and another to daycare and then get to work — in yet another part of town — while relying on public transportation, being on time is hard.

It may also be quite hard to be energetic, stay focused and do extra if you’re dealing with depression or anxiety.

What’s more, body language and gestures means different things in different cultures. Perhaps a newcomer hasn’t yet learned all the nuances of the Canadian mainstream cultural construct, which are often taken-for-granted by those in positions of power.

For those of us who enjoy a lot of advantages in our society, we should strive to be me more open-minded in our thinking, to be aware that not everyone’s journey on the planet is the same as ours.