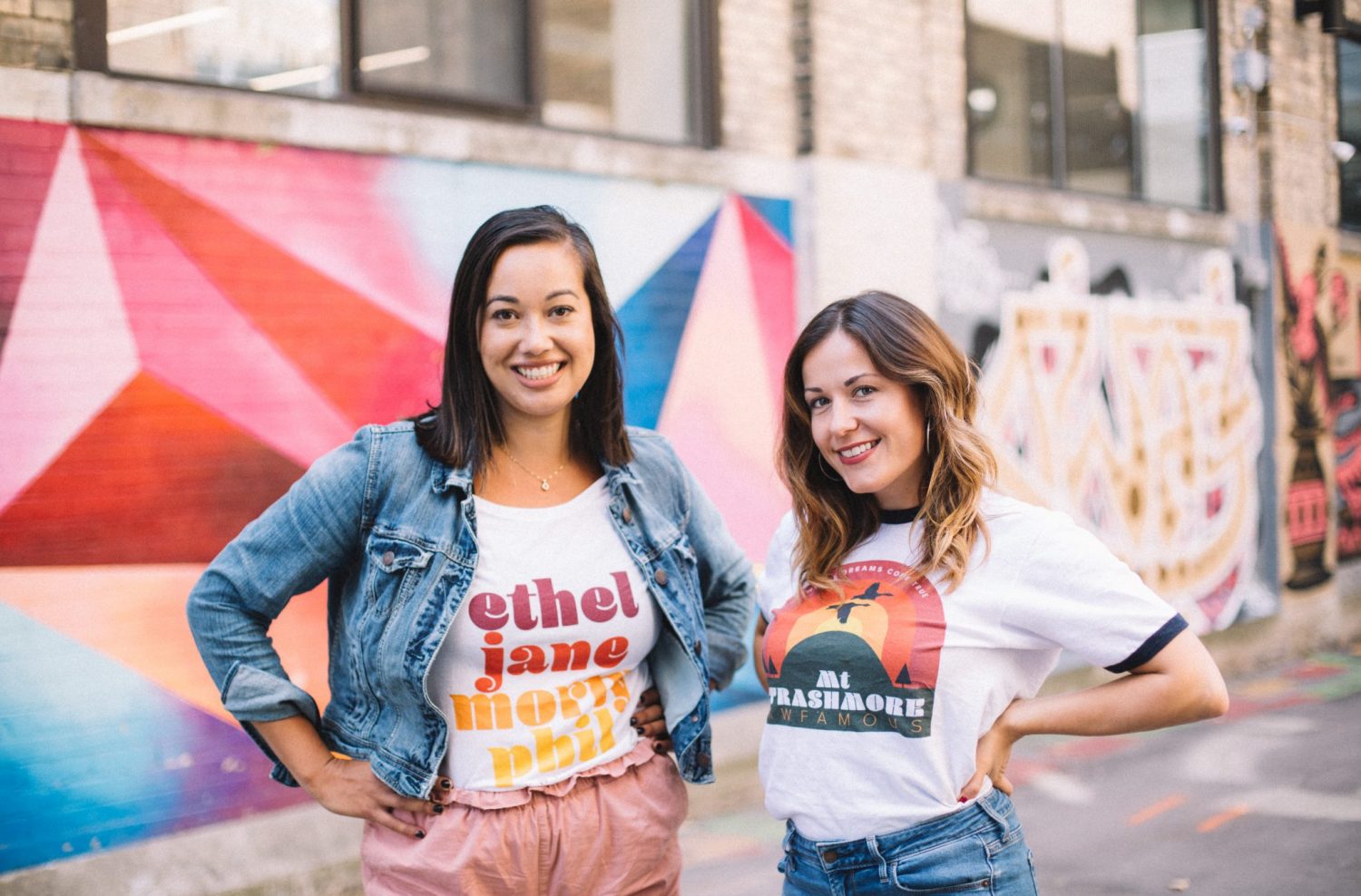 Wisecracking Their Way to #KWFamous

Robin Lindner and Elaine Decleir, co-founders of the #KWFamous hashtag, are hot off the release of their latest creation. The design, nicknamed “the squad,” is a nod to four beloved local booze cans — Ethel, Jane, Morty and Phil.

The pair, dressed in #KWfamous t-shirts, settle in for some much deserved late afternoon drinks on the patio at Jane Bond — or just Jane, if you’re on a first name basis.

The hashtag has yielded its own level of KW fame for the two. In roughly two weeks, their hyper-local Kitchener-Waterloo inspired designs earned them shine from The Record, 570News and CBC (web and radio).

Plus, “Jeff Pickle from CTV slid into my DM’s,” Lindner joked.

The two wisecrack relentlessly. It’s hard to tell what’s a joke and what’s serious. It offers a clue as to how they generate new material.

“#KWFamous started off when we were out with the bitties, um, our girlfriends,” Lindner said. “We would say, ‘you’re KW famous,’ — not actually famous by any means, but KW famous. I mean people may have been saying it before us, but I got the Instagram handle first.”

“That night we also bought the Robin+Elaine website,” Decleir added.

Decleir, a University of Western finance student turned marketer, grew up in Waterloo’s Westvale neighbourhood. Lindner split her childhood between Fergus and Scarborough, and settled here after taking graphic design at Conestoga College.

“I didn’t think I’d come back to KW…” Decleir said.

“Maybe that could be a sticker?” Lindner interjected. 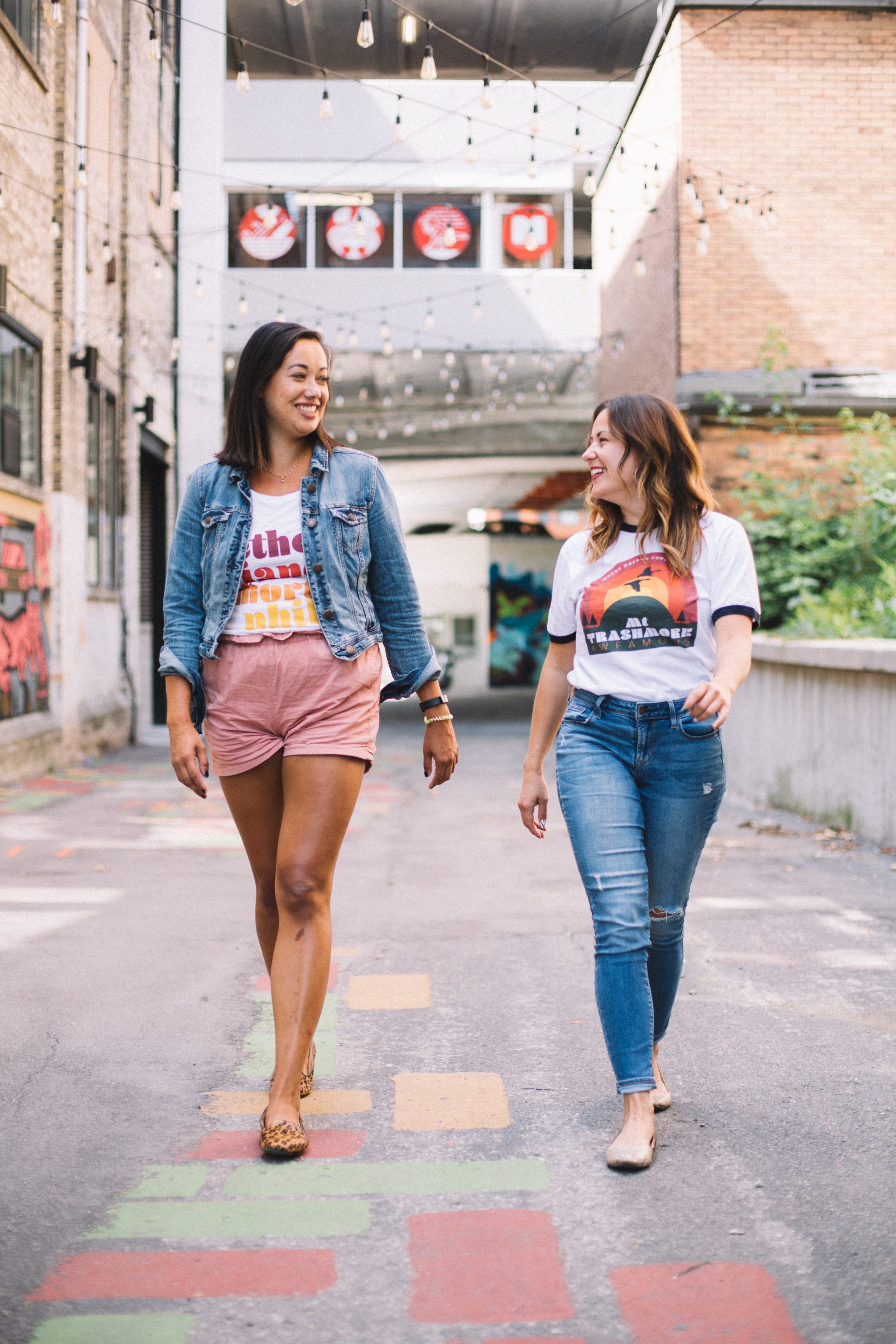 The two friends and business partners met at a mutual friend’s boozy screening of ABC’s The Bachelor. When a Record story about Victoria Park’s celebrated Otis the Swan proclaimed he was, “a bachelor, and he’s happy to stay that way,” they saw an opportunity.

“At first, it was about lead generation,” Decleir said of the design. They handed some stickers out at the True North Conference as a kind of business card. It was a chance to show a different side creatively.

Before teaming up, both Lindner and Decleir bounced around the Region’s tech scene excelling in various high-profile marketing and design jobs. New found KW fame aside, the two are strangely humble given their cred.

“I think I just sent you a message one day saying, ‘do you want to start a business together?’,” Lindner said.

It took some trial and error learning how to run a business. But they’ve mostly sorted things out.

“Robin takes it from branding to design and we work on the messaging together, and then I’ll work on the marketing strategy, analytics and things like Google ads,” Decleir said.

As for the particular challenges of starting a business, Decleir said it’s important to not take themselves too seriously.

“We’re not Toronto, but we have good stories — things we all share, things that make everybody laugh,” she said.

Their design of an LRT-inspired train with the phrase, “Choo Choo MF’er,” is defiant, funny and ultimately cathartic for a community who agonized for through eight years of approvals, construction and delays before getting the ION LRT.

Decleir said that she would love to see #KWfamous become a curated brand with events that reflect the community’s values.

“We always say it’s collaboration over competition. We’re doing this bigger picture kind of thing, and do you want in?” she said.

This looks like just the beginning for Robin+Elaine. They’re taking meetings and launching a video. They won’t say exactly what they’re working on next, but whatever it is will be another chance to add their stamp (or sticker) on the community.