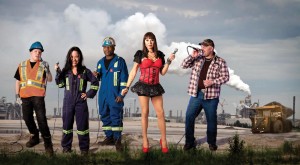 Who says documentaries can’t be fun?

With the support of the Planet in Focus KW and Princess Cinema, Alternatives Journal (A/J) is bringing an unmatched documentary experience to Uptown Waterloo this Thursday, February 3rd with the screening of Charles Wilkinson’s Oil Sands Karaoke.

Oil Sands Karaoke follows five individuals working in Canada’s Athabasca tar sands as they battle for the wining title of a karaoke contest in Fort McMurry, Alberta. Wilkinson and his team found his unlikely stars just by hanging out in the local karaoke bar.

“The first time I really truly paid attention to karaoke in an oil patch bar I saw that there are some people who take it very seriously,” said Wilkinson. “They are really good at it. They can carry a tune and they have good performance skills.”

A/J Editor-in-Chief Eric Rumble is thrilled the film is back for another year as part of the “Planet in Focus” series. The series had major success last year with the screening of five other documentaries, including the critically acclaimed film The Ghost In Our Machines.

“Our whole aim with the Planet in Focus series is to present environmental films, locally. And because there’s so much incredible stuff that recently came out in the documentary realm, that became one of our content priorities,” says Rumble.

Unlike other documentaries, Oil Sands addresses the environmental and economic sides of the oil industry indirectly. It does so by exposing the human side of the issue instead of framing it with a prejudiced narrative.

“It’s really interesting to see some grounded ideas on the subject as opposed to the political points that are driving the conversation,” says Rumble.

The film’s unique vantage point allows audiences to make their own conclusions about an industry that is as fervently driven by supply and demand as it is criticized for its lack of sustainability.

“It’s a really interesting perspective because [the protagonists] are aware of the scrutiny on what they do, but they are also sensitive to the idea that, that scrutiny needs to be taken with a grain of salt coming from a world that relies so inherently on oil,” says Rumble.

Wilkinson understands that most people who head to Fort McMurray do so as a measure of last resort.

“I know this will offend some people but in my experience, having been up there for quite some time is that very few people go to Fort McMurray for work if they are capable of getting a job that pays well anywhere else,” he explained. However, some of those workers made up the diverse portrait he paints in the film.

Rumble says he is curious to see what kind of audience the event will gather, as the event is part of AJ’s experiment to make environmental awareness events fun for the community.

Considering the positive feedback Oil Sands Karaoke has received for its colourful characters and lively musical accompaniment, it’s no surprise it was selected to bust the stale stereotype of sullen documentaries. Even if you don’t take anything away from its social narrative, you’ll still have fun. That’s because “it’s a much more realistic story that anyone can identify with,” says Rumble.

The documentary screens Thursday, February 3rd at 7:00pm at the Original Princess.. Tickets are $10 and can be purchased at www.alternativesjournal.com in advance or on-site at the door.

Ticket purchase includes a free TBR tall can and line bypass at Chaisaw until 9pm.

With files from H.G. Watson