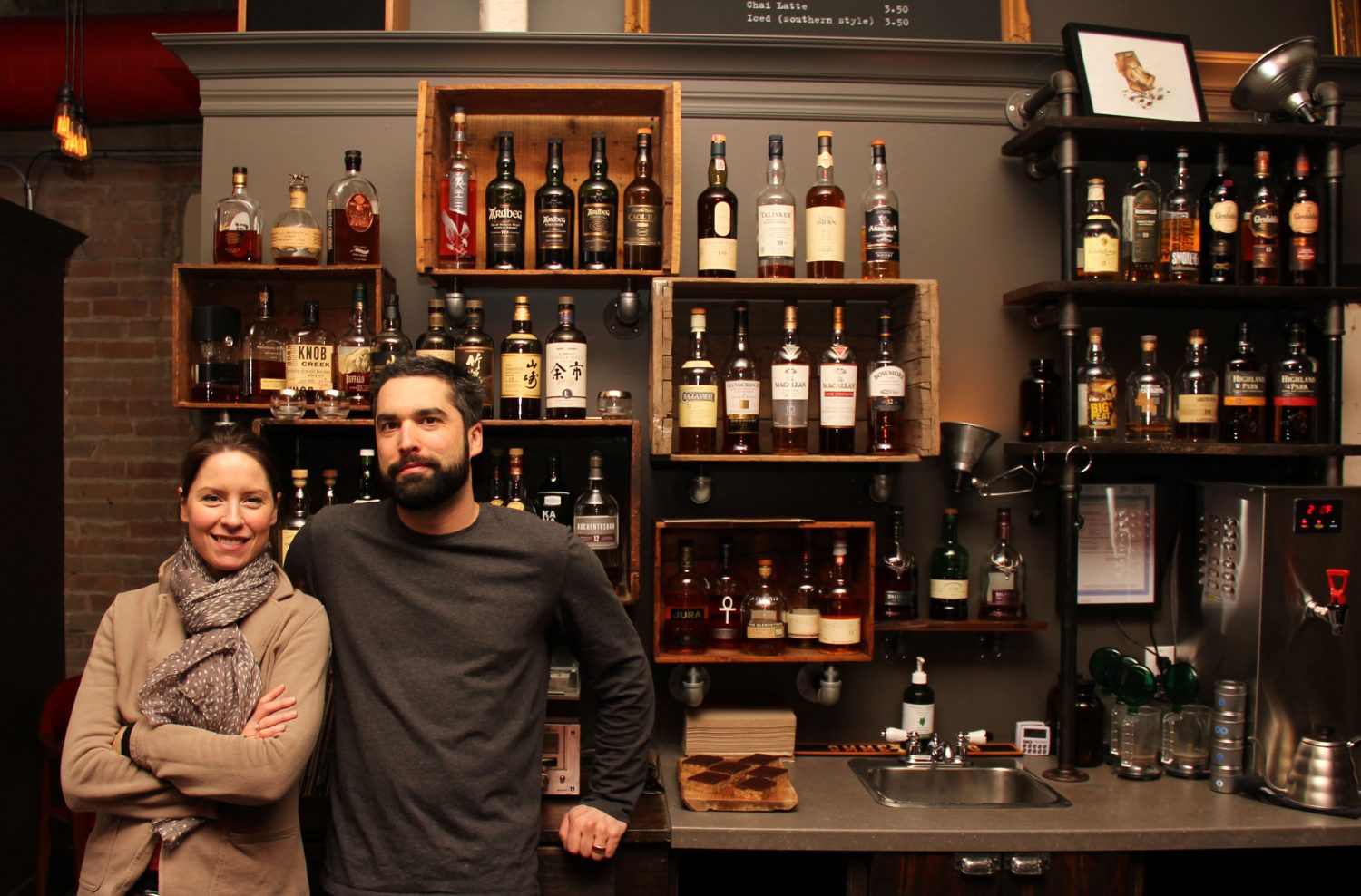 The city of Waterloo has become home to a mythical creature. It’s a jackalope, and it can be seen outside a newly opened storefront at King Street North and Bridgeport Road East.

The jackalope, which is part jackrabbit, part antelope stands guard outside D.V.L.B. (Death Valley’s Little Brother), which opened early last year and specializes in espresso and single-malt whisky. It is unique for a coffee shop to specialize in hot, caffeinated drinks while also tapping into whisky-drinking culture.

Partners Katherine and Joel Gingrich decided to fuse their passions into one business. Katherine developed her passion for espresso while working at a cafe in Australia. Joel is the whisky expert and aficionado.

“I did my training in Australia a few years ago at a cafe; it was a really busy environment. They are pretty hardcore, they don’t mess around. So, it’s primarily expresso-based and attention to detail to coffee,” Katherine explained.

“My husband and partner, Joel, is a Scotch enthusiast. And so we thought, ‘how could we put these two worlds together?’” Hence the hybrid and culture of D.V.L.B. was born.

Though it may seem odd to have a shop specializing in both coffee and whisky, the two go together more than most people think.

“As a business model, a lot of coffee shops will be open early in the morning and closed in the evening around six or seven because not too many people are going to want to get a coffee at nine at night because you don’t want to go to bed all hyped up on caffeine. So, it’s a good transition from the day to the night, from coffee to whiskey,” Joel noted, explaining that the act of sipping whisky is very much like having a cup of coffee: slow and meant to be enjoyed with good company.

“Single-malt whiskies aren’t really the type of drink that you shoot or throw back while watching a football game, it’s really a more reflective drink,” he added.

While most customers are comfortable with going up and ordering a cup of coffee, choosing a whisky can be more of a complicated process. However, the café has simplified the process of picking out a drink so it becomes more of a fun experience than one of confusion.

“We walk people through it because it’s a really fun experience for us. And we have a whisky chart that kind of plots out of what a whisky will fall in, whether it’s sweet or if it falls into the smoky area or the fruity,” said Katherine, explaining the detailed chart, which features creative graphic design with labels and graphs.

“It takes away that intimidation factor because of the quick information to make that decision, ‘Oh, I like this,’” Joel pointed out.

Niche independent shops and businesses like D.V.L.B represent how the City of Waterloo is starting to grow.

“You see that a lot in New York and Toronto but you haven’t seen it really in Waterloo, so we kind of want to crank it up,” Joel remarked, saying that D.V.L.B. has participated in getting to know some of the other independent coffee owners in the city to create a special coffee community.

“It’s a major trend in the big cities. They call it a craft-type thing, there’s that whole micro, local way of doing business is very popular right now. Fortunately for us, it’s a trend we’re a part of,” said Joel.