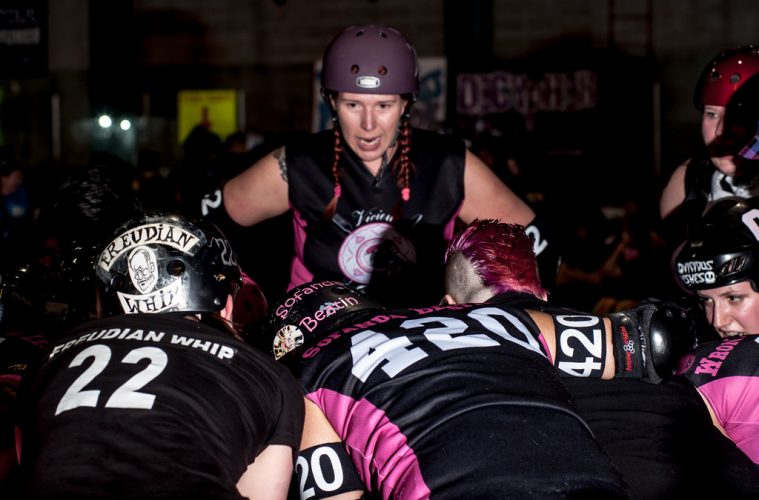 By day, Kat Hiller is a legal assistant working towards her masters in counselling psychology. But by
night, Wednesdays and Sundays to be exact, she is Nekro Nancy, a hard-bitten blocker for Vicious Dishes of the Tri-City Roller Girls.

“I think that we create a version of ourselves that we really like,” said Hillier of the derby alter ego. “You can’t bring your derby self to the office … It’s a really healthy way to channel any frustrations you have, I consider it therapy.”

Hillier’s first interaction with roller derby happened near a year ago when she came across an ad in the newspaper calling for “fresh meat” and thought it might be a good way to get some exercise.
“I went to the try out and they had me put on quad skates and try that out,” she recalled. “I didn’t completely eat floor so we went from there.”

Roller derby is an entirely female contact sport that has been gradually gaining recognition since its resurgence in Texas in 2001. Scott Jones, media chair for the Roller Derby Association of Canada, referred to this as its first wave. “It was girls who wanted something that they could call their own,” said Jones. “There was no pre conceptions, no ‘you can’t do this, you’re not good enough,’ no ‘you’re just doing what your boyfriend does,’ total blank slate for everybody.”

Now in what Jones would call the second wave of derby, the sport has begun to develop focus and structure. However, it is still in its early stages and maintains it grassroots nature. Any number of
women, no matter their age or skill level, can form or join a league.

“Everybody is so different,” said Hillier. “You have housewives, you have religious people, you have country girls, you have all sorts of punks. There is no limit on what people could be into. Its open, any- one could play.”

Tri-City is divided up into three home teams and one all-star team, the Tri-City Thunder, which is customary of leagues across Canada. However, there is a strong sense of community between the girls as a whole, not only in Kitchener’s league but within and between those across the country. “You get that many girls together, there’s bound to be drama. But it’s dealt with on the track and it’s left there. As soon as the game is done, we’re talking about ‘where’s the after party’ and ‘let’s go have a drink.’”

Hillier participated in her first league game this past Friday against London’s Thames Fatales, kicking off Tri-City’s season which will last until October. A boot camp runs simultaneously as an extended try out for women wishing to be drafted for a team at the end of the year.

Men have even taken up an interest in the flourishing sport, with co-ed scrimmages becoming increasingly common amongst leagues. Jones explained that this interest began with male referees skating with the girls and wishing to try it out for themselves.

However, there are certain aspects of derby that have carried over from its former status as largely a scripted means of entertainment which males may not be as eager to try. From players sporting fishnets and colorful accessories to showing off with fancy footwork after a score, “it’s not only a game,” said Hillier. “It’s also a show.”

Although this is a large appeal of roller derby, Jones guesses that it contributed greatly to the sport’s falling out during the 60s and 70s when women’s movements had women re-evaluating events which put females on display. However, derby has come a long way from that.

“There’s the clichés like guys go to roller derby because they want to see girls in miniskirts and booty shorts and that kind of stuff. Of course those things exist but it’s not the focus,” said Hillier. “Generally speaking derby girls don’t go to make a big scene of it, they don’t want to be viewed as sex objects ideally, this is a sport.

“As far as the future of derby it is wide open,” Jones concluded. “They are talking Olympics, we have another world cup coming up, there is a lot happening. My hope is that eventually these girls start
getting paid.”