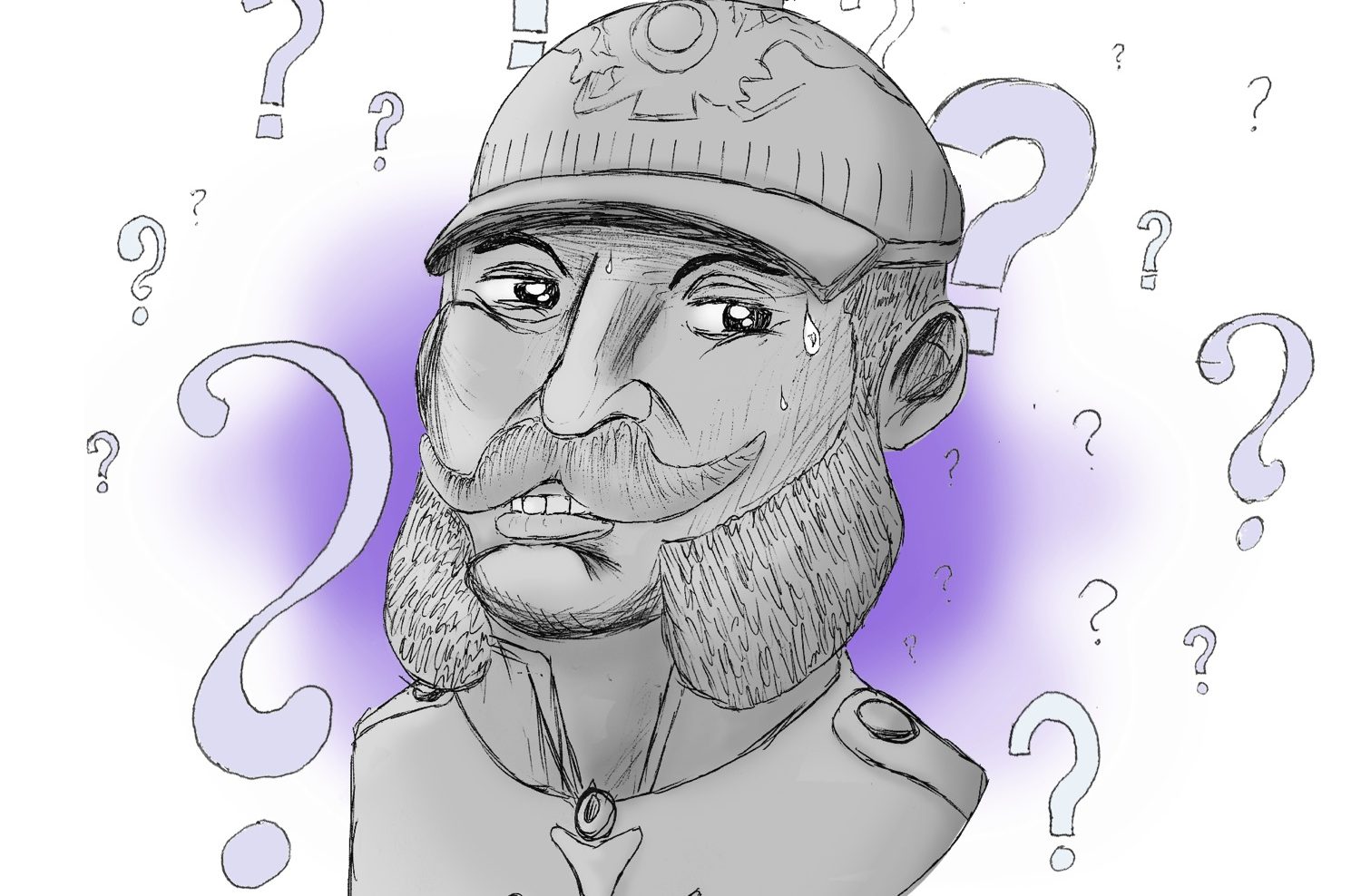 Where did the bust go?

In 1916 a bust of kaiser Wilhelm I Disappeared from Kitchener. Almost 100 years later, we’re still asking ourselves: where did the bust go?

On Feb. 15, 1916 a mob comprised of local soldiers and citizens broke into the then downtown location of the Concordia Singing Club and carried off a bust of Kaiser Wilhelm I. They paraded it through downtown Kitchener, and the bust disappeared shortly after being locked in the prison of the local regiment building.

Some say it was melted down and turned into napkin rings. Others think the bust is still hidden somewhere here in Waterloo Region, squirreled away by well-meaning citizens who might have had some love for the German motherland. Another theory is that its hiding spot has been purposefully hidden, and that one day a well-meaning gardener will hit the bronze bust while digging out a new spot for flowers.
The only thing that is certain about the bust of Kaiser Wilhelm I is that it has become the stuff of K-W legend.

“There seems to be a bit of fascination that bubbles up every once and awhile about what has happened to the bust,” laughed Karen Ball-Pyatt, a librarian who runs the Grace Schmidt room at the Kitchener Public Library. When the interest in Kaiser Wilhelm does rise, she’s often the person who gets the call for assistance. But for all the rumours, no definite answer has ever been proven. “Nothing has ever really come about it,” said Ball-Pyatt. ”Except for the photograph.”

The photograph in question comes from two years before the bust of Kaiser Wilhelm I was stolen from the Concordia Club and it is where the legend begins. Three teenage boys — Otto Knechtel and Clayton and Gordon Maier — along with park boat keeper R.E. Bush pose proudly beside the statue that they have just retrieved from the bottom of the lake in Victoria Park.

The night previous, on Aug. 22, 1914, three members of the local militia — Fred Bolton, Alan Smith and John Ferguson — had pried the bust away from its concrete monument beside the lake and chucked it in the water.

Popular opinion would find that the bust’s descent to the bottom of the lake was motivated by nationalism, both English and German. Canada had declared war on Germany just days earlier, and in the then primarily German-settled Berlin — as it was called before the name change in 1916 — some still had a great deal of love for their motherland.

But local historian Rych Mills thinks there’s another reason that contributed to the tension around the bust, one that can be just as persuasive — alcohol.

“The three men who dragged it in the lake, they were members of the militia,” said Mills. “So they get all liquored up one Saturday night and they say, ‘we’ll get that Kaiser down.’”

Mills, who runs the Victoria Park Gallery, works hard to dispel many of the myths that have become popular about Kitchener-Waterloo. While Canadian nationalism certainly played a role in the decision to trash one of the more prominent German clubs in town, Mills also believes another factor was the large number of bored troops stationed in Kitchener who had easy access to alcohol.

Evidence from the time certainly backs that theory. A Berlin News Record report from the day after the bust’s disappearance notes that after the mob made its way down King Street and into a local skating rink, “they hauled the bust upstairs and, with an electric light held to its face, endeavored to deliver a recruiting speech and sing a few more songs.”

Likewise, the three teens who helped haul the bust from the lake didn’t do it because of German national pride, but for the same reason teenagers do anything — because it was cool.

“They were boys from the neighborhood, so they went over and helped,” explained Evelyn Hahn.

Hahn is the daughter of Gordon Maier. Growing up, the event was hardly talked about in her house, though she was aware how significant it was.

“I know one time my daughter took [the photograph] to school for show and tell,” she said. “She wanted to say that was her grandfather.”

Now, regardless of what happened when the bust disappeared, its myth has taken on a significance of its own.

“It’s one of our little founding myths,” said Mills. “But the perceived idea and story of it doesn’t have much to do with the facts of what happened.”

Although he’s sure the bust is long gone, Mills can’t help but hold out a little bit of hope.

“I still have that funny feeling that someday someone is going to drive up outside and say, ‘we just bought an old house out in the country and we found this out in the outhouse,’” Mills smiled. “And then what are you going to do?”


So-what happened to the bust?

THEORY NUMBER ONE: It’s hidden in a barn somewhere in Waterloo Region (or beyond)

Mills recalls a story told to him by a former colleague at CKCO (present day CTV Kitchener) that once while working on a story outside Mannheim, an older German farmer pulled him to a back barn to show him something. It was covered in burlap and badly dinged up, but it was definitely the bust. Sadly, Mills’ reporter friend didn’t know the legend and didn’t pursue the matter — but this could simply be another riff on the idea that it’s buried somewhere in K-W.

THEORY NUMBER TWO: the bust was melted down as part of a scrap metal drive

Metal was in high demand during WWI and the bust was made of 150 lbs of bronze.
Mills theorizes that if the 118th Battalion kept the bust after they stole it, they may have brought it with them when they went
for training in London, Ont. and left it there when they realized it wouldn’t be fun to carry around 150 lbs of bronze on the front line. In London, where very few, if any, would under- stand the significance of the bust, it was des- tined to support the war effort as scrap metal.

THEORY NUMBER THREE: It was turned into commemorative napkin rings

There have been a few reports that the bust was melted down and turned into com- memorative napkin rings for the whole of the 118th Battalion.

This theory gained traction when it ap- peared in the Waterloo Region Record
in separate articles published in the ‘50s and ‘60s, although both used anonymous sources.
Two napkin rings bearing the insignia of the 118th Batallion have appeared, but there is no way to confirm if they are from the bust since we have no other metal from it. One of the rings is currently in the Waterloo Region- al Museum, while a private collector holds the other.
Mills thinks it is highly unlikely that the bust was melted down to provide napkin rings for an entire regiment. “That means that we have 750 people who have kept this a secret all that time and have never showed anybody or told anybody.”
However, it’s possible that pieces of the Kaiser’s bust could have snapped off as the crowd carried it through Kitchener — perhaps these pieces were the ones melted down for some festive dinnerware.

Mills heard another story from the Rumpel family, who owned the barracks building at Courtland and Queen Street that housed the 118th Battalion during WWI. After making some inquiries about any interesting stories the family might have, Mills received a letter from an elder member of the family who re- called, as young boy, seeing the regiment use the bust for target practice.
It is possible the regiment secretly kept it. The last place the bust was reportedly seen was in the regiment’s prison.
“What would be more natural than for these soldiers to shoot this thing they had stolen?” asked Mills.

A persistently popular theory is that the statue is buried or otherwise hidden in K-W, possibly by people who supported the Kai- ser. But Mills is unconvinced — many of the German settlers here were actually trying to escape life in Germany and may not have had kind feelings towards Wilhelm. Besides, if it were buried, wouldn’t a gardener or some er- rant condo builder have found it by now?