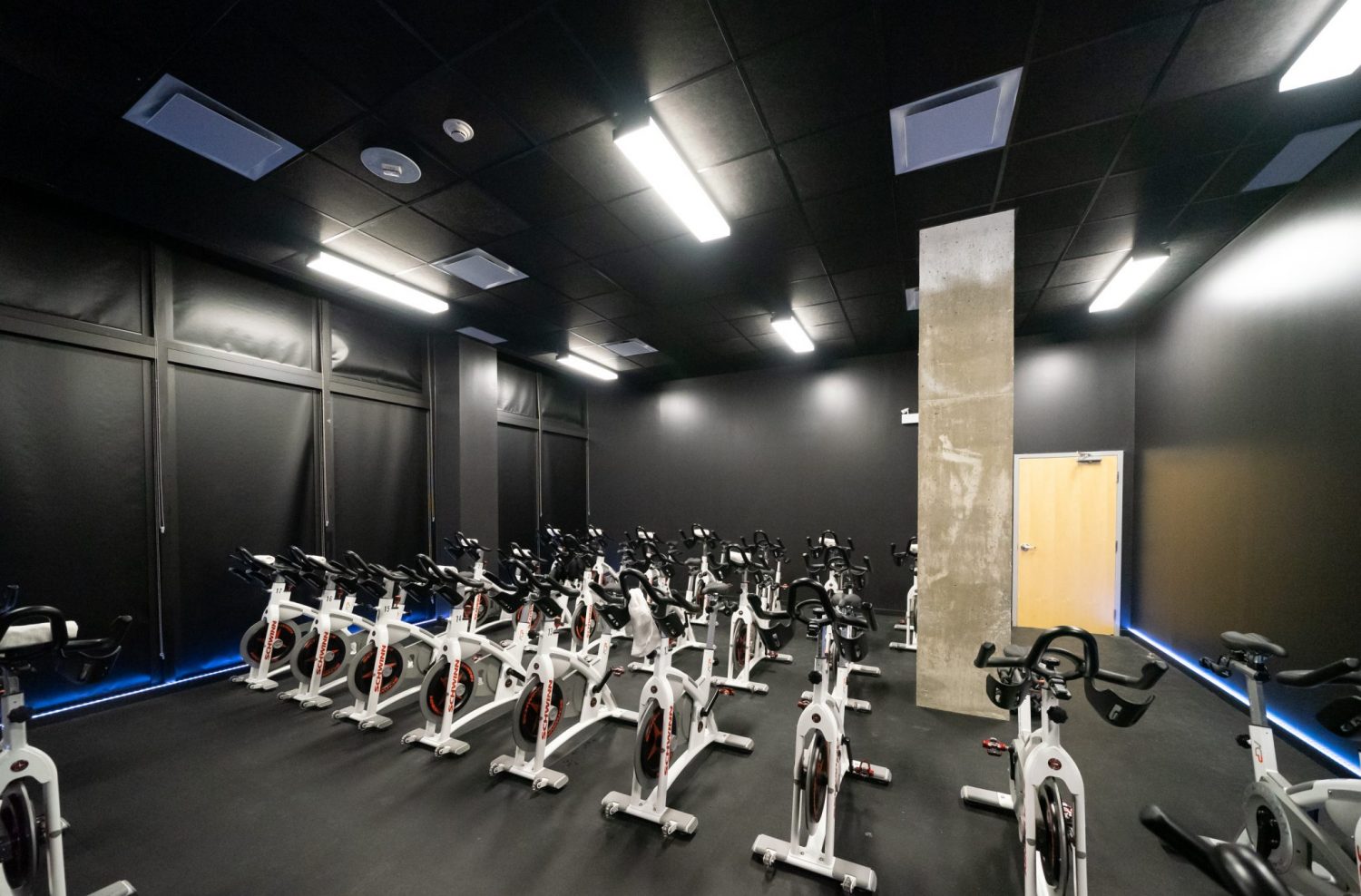 Trying Out Spin Studios in Kitchener-Waterloo

I’ve always hated working out. Growing up, I was that kid that would fake sick to get out of gym class. I don’t like sweating, I don’t like feeling out of breath and I don’t like doing things I’m not good at. Who can argue with that?

As a self-identified chubby girl, gyms have always been a source of anxiety. I only went to gyms with women’s-only sections, and even then, I thought everyone was judging me. My own self-hatred, mixed with my lack of enthusiasm about jogging on an elliptical for 30 minutes made me stop going. I hate everything about it.

When “Wellness Collective” Hustl + Flow opened in September 2018 in uptown Waterloo, everyone I knew seemed to be going, even people who weren’t Instagram fitness models. I liked the idea of a scheduled spin class, with a clear start and end time, an instructor to encourage you, and a dark room that offered a sense of anonymity. It took me a while to encourage myself that I was capable of doing a group indoor spin class, but at the end of 2019, I did a few classes and enjoyed it.

Then, at the end of the year, two spin studios that offered similar services popped up in downtown Kitchener, providing Hustl + Flow with some competition. Freedom Cycle and Cyclone Studio seemingly came out of nowhere.

Because I live close to downtown, I wanted to try them out and see which one was best suited for me — so I did just that.

Before I get into my cross comparison, let’s get a few things clear: I took one class at both Cyclone and Freedom; I’ve taken about six classes at Hustl + Flow, primarily because it’s been open longer. I don’t work out often, and I’m not thin (to be clear, these are not mutually exclusive), so I think I represent the average consumer who might be looking to get into group fitness. Like I said above, I literally loathe exercise. I’m also aware that my experiences are completely different from yours, so I won’t be picking a “winner.” I’ll just give you the facts about my experience, so you can make the best decision for your wallet — and your body. 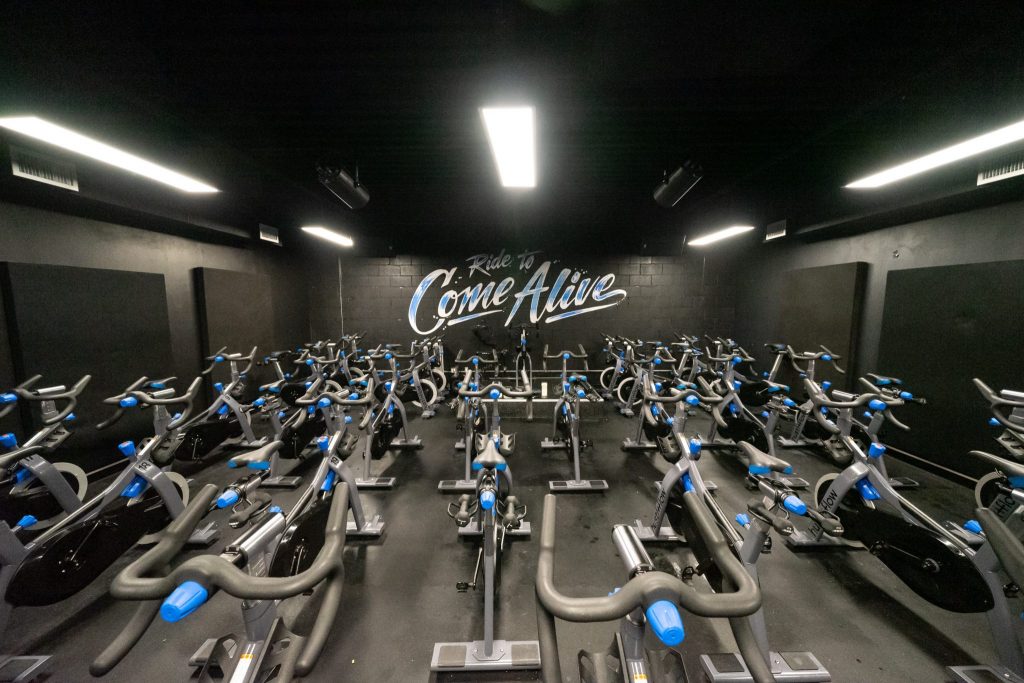 You book online through a fairly user-friendly website. Classes are posted online a week in advance. The class names can be a little confusing for first-timers. I wish Hustl + Flow would clearly differentiate what classes are spin, yoga or boxing on their site.

Hustl + Flow is one of those Instagrammable spaces, with a well-thought out design plan and murals from local artists like Trisha Abe and Stephanie Scott. It feels luxurious and expensive. It’s complete with saunas, a large lounge area and even a hair salon called Seint. Because Hustl + Flow also offers yoga and boxing, it’s the largest of the three studios, sitting two-storeys high.

I’ve found the change rooms to be small, so I usually come dressed to avoid being naked in front of people I don’t know in a cramped space.

They’re always heavily staffed, which makes it easy to ask questions, but the busyness of the place can be overwhelming.

The spin studio is painted black with low light, achieving the sense of anonymity I was looking for. The lighting changes throughout the class, so sometimes you’re spinning in complete darkness.

To get this out of the way early, I found the class experience at all three studios really similar. The room is dark, the music is loud and the instructor is similar to a motivational speaker. As someone who feels self-conscious working out in public spaces, I felt that Hustl + Flow was encouraging. The instructors spoke more generally to the whole class, opposed to singling anyone out. I appreciate that.

If good music is a criteria for you, Hustl + Flow has really diverse programming in terms of playlists, some focusing on specific artists like Lizzo or Drake. Hustl + Flow can feel like you’re working out in a nightclub — at some points you feel like you’re in a choreographed music video, not a spin class.

Pro-Tip: When booking online, book early. I’ve tried to book a class a day in advance, and they’ve been full. As the oldest of the three studios, Hustl + Flow is busy, I mean really busy. All of the classes I’ve taken have been fully booked. 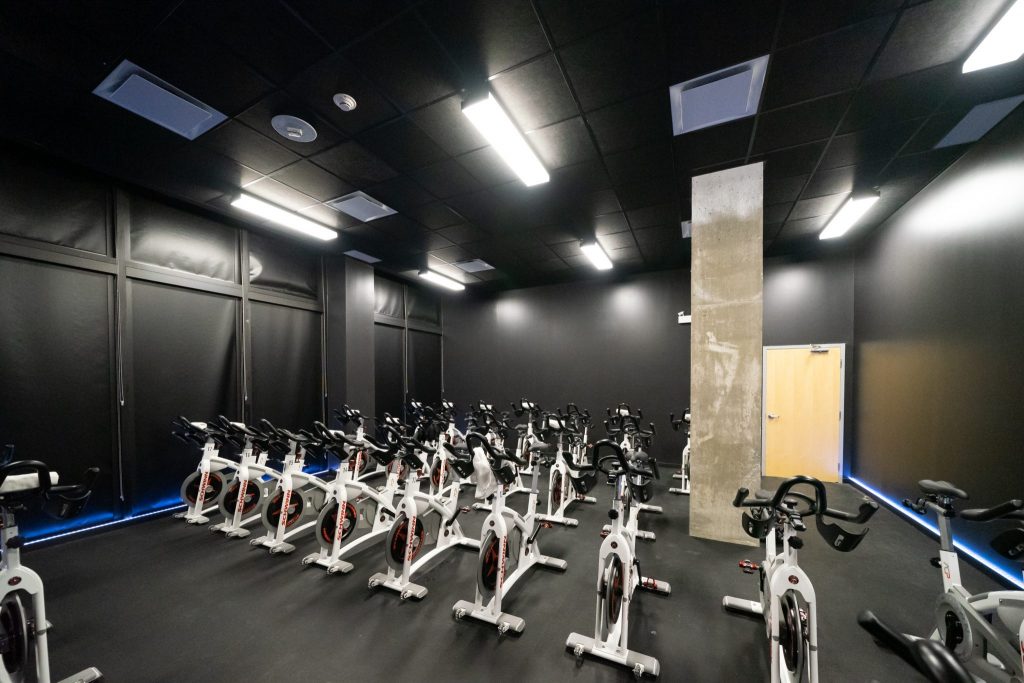 The online booking system is really similar to the others. The main exception is that they have several weeks posted in advance, making it easier to book numerous classes at once.

Cyclone’s location is prime. It’s easily accessible via public transit, and the front door was easy to find in such a large building. The design is bright, with an industrial feel.

The change room was huge. Complete with lockers, showers, Dyson hair dryers, complimentary toiletries and huge, well-lit mirrors, it’s a great change room to get ready in before work.

Because the space is smaller, there was only one employee when I was there (that I saw), but because Cyclone is only offering spin, it didn’t feel as busy as Hustl + Flow. I was able to get help with both my shoes and my bike. The staff were friendly and eager to help.

As said before, Cyclone abided by the typical formula: dark room, loud music, motivational speaker-like instructor. The room has two walls of full windows with black-out curtains, so pitch-blackness wasn’t achieved, but it was close.

The class felt really similar to the classes at Hustl + Flow — it was encouraging and no one was singled out for not being able to keep up. Like Hustl + Flow, the class was “choreographed.” If you’ve never taken a spin class before, in choreographed classes, the instructor will encourage you to bob your head to the left and right with the beat of the music, among other easy-to-follow moves. At times I felt silly, so I just didn’t do it.

Cyclone also does music-themed classes, just not as regularly as Hustl + Flow.

Pro-Tip: Cyclone uses different bikes and shoes than both Hustl + Flow and Freedom (who use basically the same style bikes and shoes). So, if you’re used to Hustl + Flow or Freedom, but want to try Cyclone, maybe give yourself some extra time to figure out the shoes and how to adjust your bike. 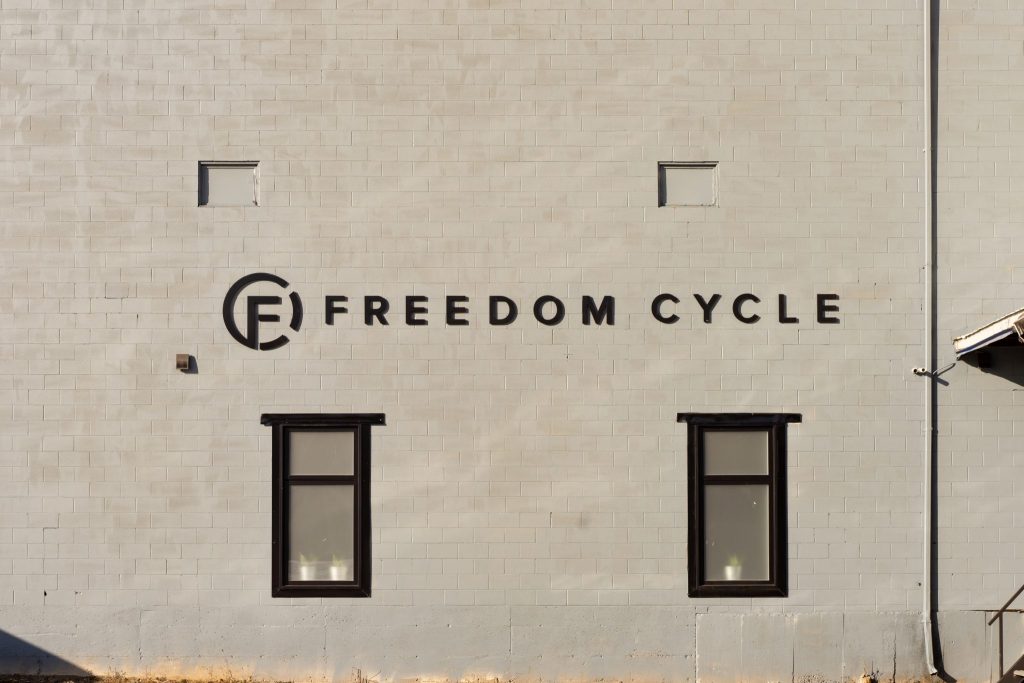 Like the others, you book online. Classes are posted roughly two weeks in advance. Freedom is currently scheduling about three classes a day, when Cyclone and Hustl + Flow are scheduling approximately six. Therefore, time slots are a bit more limited. You also don’t reserve a bike in advance.

Freedom’s entrance can be a little tricky to find, but the confirmation email gives helpful instructions. The space is nicely spread out, with a large lobby and small waiting area with lockers. It’s not as flashy or luxurious as Hustl + Flow, but that didn’t bother me. If anything, I felt more comfortable. Instead of gendered change rooms, Freedom has about four or five standalone change room stalls, separate from the bathroom.

When I got there, I was given a tour because it was my first class. This eased a lot of my anxieties and meant I didn’t have to ask any questions. The employee at the front desk was really friendly, and even introduced me to the instructor before class. I went on a Sunday morning and it wasn’t busy, making this more feasible — but I thought it was really good customer service. It felt personal and intentional.

Once again, the classes were similar, but my class at Freedom didn’t have much choreo. Choreo has made me feel silly in the past, so I was thankful for this. The instructor said the focus was to achieve good form on the bike, which I think can be compromised by flashy choreo.

The room was pitch black with a low, red light. The wall you face when you ride is covered with a mirror. I found myself distracted by this, but it wasn’t a deal breaker.

The class I took was definitely one of the more challenging spin classes I’ve taken. However, the instructor had such a genuinely encouraging and positive attitude it was easy to want to keep up. The class was nowhere near full, but the instructor knew everyone’s names — it was clear they were regulars. She also took the time to teach me how to fit my bike, opposed to just doing it for me. I thought my lack of skill would stick out in a class with less people, but I didn’t feel judged for taking a break.

Pro-Tip: Bring your own lock — unlike Cyclone and Hustl + Flow, the locks aren’t supplied for you. Also, go early. Because bikes are first-come, first served, you want to make sure you get the spot you want.

As I said initially, there’s no “winner,” here. I would, and probably will, go back to all three spin studios. What’s great about all three is that you can just take one class here and there. Unlike traditional gyms, you’re not locked into a contract.

Each studio has basically the same goal and approach to inclusivity, positivity and encouragement, with a few minor differences. With Hustl + Flow’s popularity, I think it’s great that downtown Kitchener has made space for this market.

I still really hate working out, but the group fitness model really works for me, and clearly it works for other people, too. If you’ve thought about trying a spin class at one of these three spots, I encourage you to do so. If this chubby, pessimistic girl can have fun at a class, you probably can, too!