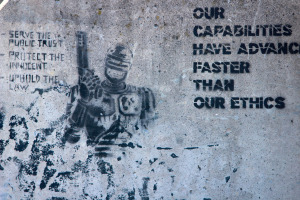 This post has been republished from albeard.com with permission of the owner

What happens when you take a group of community builders from different sectors across the region, put them in a room, and ask them to talk about innovation? Two things – the dropping of buzzwords, and a collaborative dialogue on the present, and future of the area we live in.

CityAge, is “a platform for dialogue, designed to amplify new ideas in business, government and society.” With events held across North America, the goal is to develop partnerships between public and private sector workers, entrepreneurs, government, developers, and thought leaders who are building an urban future.

Being a millennial (another term largely discussed today), I take to Twitter like a fish to water. I’m more apt to explore my opinions online and interact with my peers in a largely public forum. It’s something I’m used to, comfortable with. Put me in an atrium and ask me to initiate conversation with a stranger and I withdrawal into my shell. That said, should someone approach me I’m definitely available for bantering.

The day started out as it generally would – live tweeting the event, using the hashtag, posting quotes from speakers, and weighing in on conversations. What I didn’t expect however, was for traffic to be dominated by four people. I fully expected that a group such as the one I was lucky enough to be part of, to be fully participatory. Instead I was left having a conversation with a very small peer group, echoing my own thoughts.

Now this isn’t a bad situation to be in – in fact, monopolizing the online conversation ended up working in my favour. Issues I had with the conference ($600 registration fee, lack of 25-35 year old speakers/panelists, condescension towards gen Y, gender bias, etc.), helped in facilitating those online conversations. Of course my issues come from a very youthful place. This conference was not intended for my peer group. This conference was intended for those individuals who are in positions of authority, those who are in leadership roles and have the tools to drive change.

My biggest concern after day one however, was that it should have been a conference for both.

Multiple times, speakers and panelists shared their opinions on how gen Y will support the development of healthy and sustainable cities. Speakers shared their visions for friendly cores with whimsical stores lining the streets, dog parks, coffee shops with free wifi, access to rapid transit, bike friendly streets, and hanging baskets in the windows.

I’m all for all of this, I am, truly. I’ll be a champion for their observations – I don’t want a house in the suburbs, I want a loft in the core. I don’t want a car, I want a carshare membership. I don’t want children (right now), I want a dog. I am a 20-something woman, with a brilliant career ahead of me, looking to pay off a mass of student loans, with no intention of taking my talent else where. I am an urban developers unicorn.

You may wonder then what I’m getting at.

My concern was that we weren’t present, we weren’t accounted for, and we weren’t sharing this information. At no point did the issue of youth unemployment come up. At no point was the fact that every four years or so, 50, 000 post secondary students make their way through the region with a retention rate of maybe 1 in 5 grads? At no point, did one single panelist raise the question of what we can do to stop that. Instead, the conversation surrounding the post-grad population was regarding their ability to drink coffee and take care of a pet.

Youth employment should have been front and centre today. We need young people to develop our core and to do that we need to give them reason to stay.

I’ve been through this cycle, front to back. I fell in love with KW during my undergrad but couldn’t afford to stay once I graduated. I wasn’t offered one of the 8000 available jobs found in Waterloo Region (heavily saturated in the tech industry). I wasn’t living off my parents salary. I wasn’t born in the region. Thankfully, I was lucky to be offered a position at the university one year later.

What should have been, and what needs to be discussed by this same group of thought leaders is – what can we do to encourage affection between our transient student population and the Region of Waterloo? What can we do to bring them past King & University out of the bubble into the core? How will their presence help create a better Waterloo Region?

We pride ourselves on being innovative, supportive, and entrepreneurial in spirit. It’s time to take that energy and refocus it on helping those who are in a position to make or break the area we live in