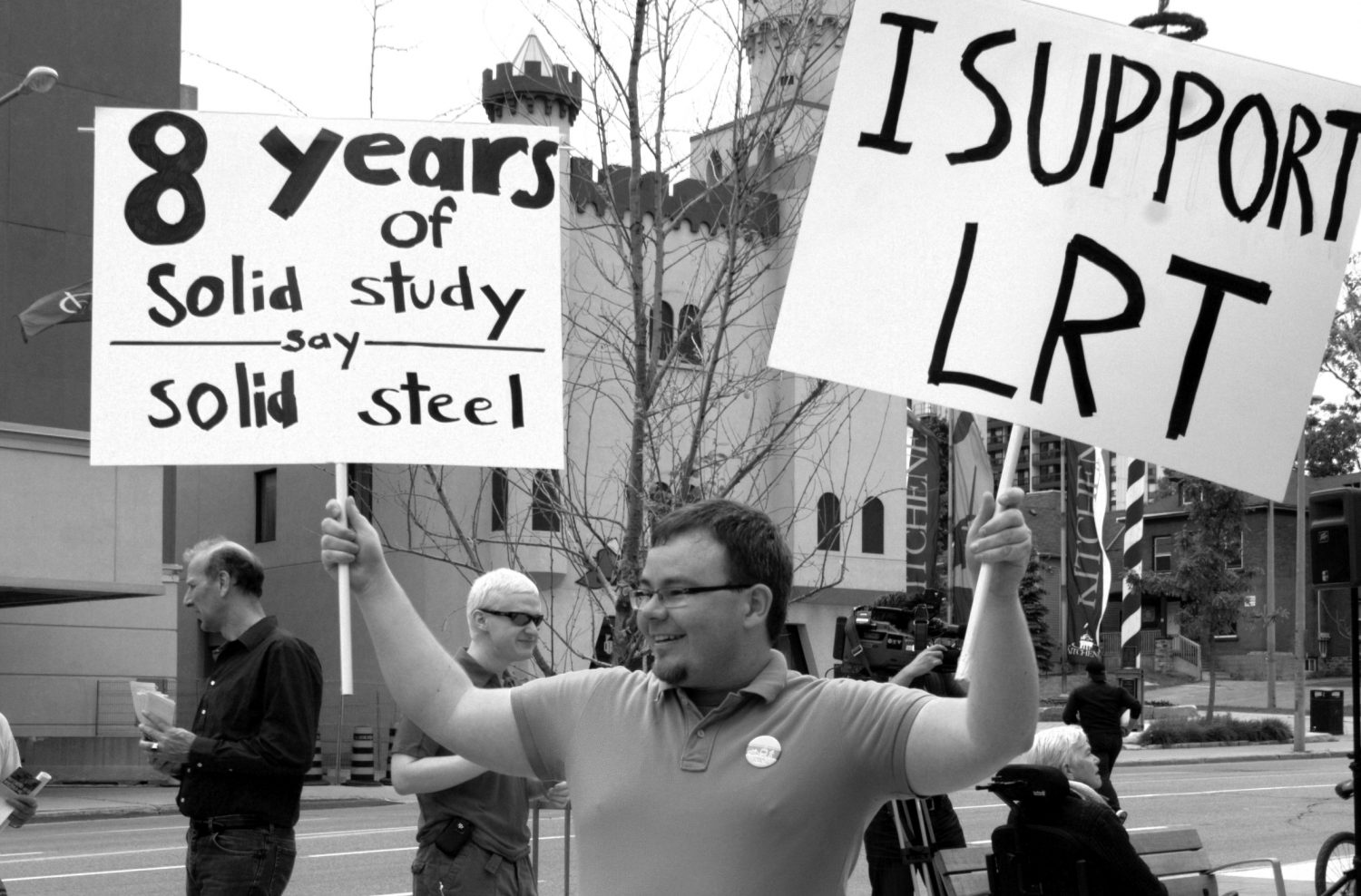 Time to get on board with LRT

An LRT supporter at a Rally for Rails event in the summer of 2011. • NICK LACHANCE FILE PHOTO

The recent resurgence of voices coming out against the region’s plan to introduce light rail to some of our streets is a last-ditch effort to maintain status quo to hang on before shovels finally meet the ground, elections and due process, decades of planning be damned.

I intended to write about transit service standards this month, but when a debate as important as this one becomes so overwhelmed by anger and misinformation, it’s worth taking some time to set the record straight.

To keep things simple, I’ll break down opposition to LRT into two basic categories: “We Can’t Afford It” and “I Don’t Want To Pay For It.” These arguments are closely related, to be sure, but the distinction between the two is important. Here’s why these arguments can’t hold.

The “We Can’t Afford It” argument suffers primarily from the myth of normalcy,leading to the conclusion that because building car-dependent places is usual, that makes it sort of free.

The sum of $818 million — the total cost to implement light rail — is typically used to punctuate how gross a misallocation of resources it is to build an LRT. This is never weighed against the alternative billions required for expanding and maintaining motorways.

In actuality, we can no longer afford current conditions. We never could. A 2008 survey of Canadian cities conducted by the Federation of Canadian Municipalities estimates that we owe $123 billion in delayed infrastructure maintenance, a product of contemporary development and an unwillingness to understand its true costs.

The dirty secret of car culture is that it doesn’t pay for itself. Cars don’t pay taxes, people do, and people with cars require more roads, sewers, police and snowplows than people without cars. The more people without cars there are, the more money there is to start actually paying for what we have already, and for producing more value-generating infrastructure projects in the future.

The “I Don’t Want To Pay For It” argument also overestimates how much car culture contributes to this collective thing we call a community. But the bigger problem is that it fundamentally misunderstands what makes driving fun, convenient and also sometimes maddening.

It’s true that many car-dependent people will never step foot on a light rail vehicle, but that definitely doesn’t make LRT useless to them. “I Don’t Want To Pay For It” misses that it’s not trains (or buses, or even bikes) that make commuting a pain: it’s other cars.

A car is at its best when it has tons of space. Cars need a lot of it, and they hate sharing. This is why car ads promote long open stretches of road, not stop-and-go traffic. If you like driving, then you love space, and one thing light rail does very well is free up space by getting more people to take up less of it while they’re getting around.

So when you hear someone claim that we can’t, or they shouldn’t pay for light rail, remember that habits can change, and priorities along with them, but there’s simply no escaping the immutable logic of money meets geometry.

Branden Wesseling is a transportation advocate with TriTAG. He can be found on Twitter as @KitchenerBikes.