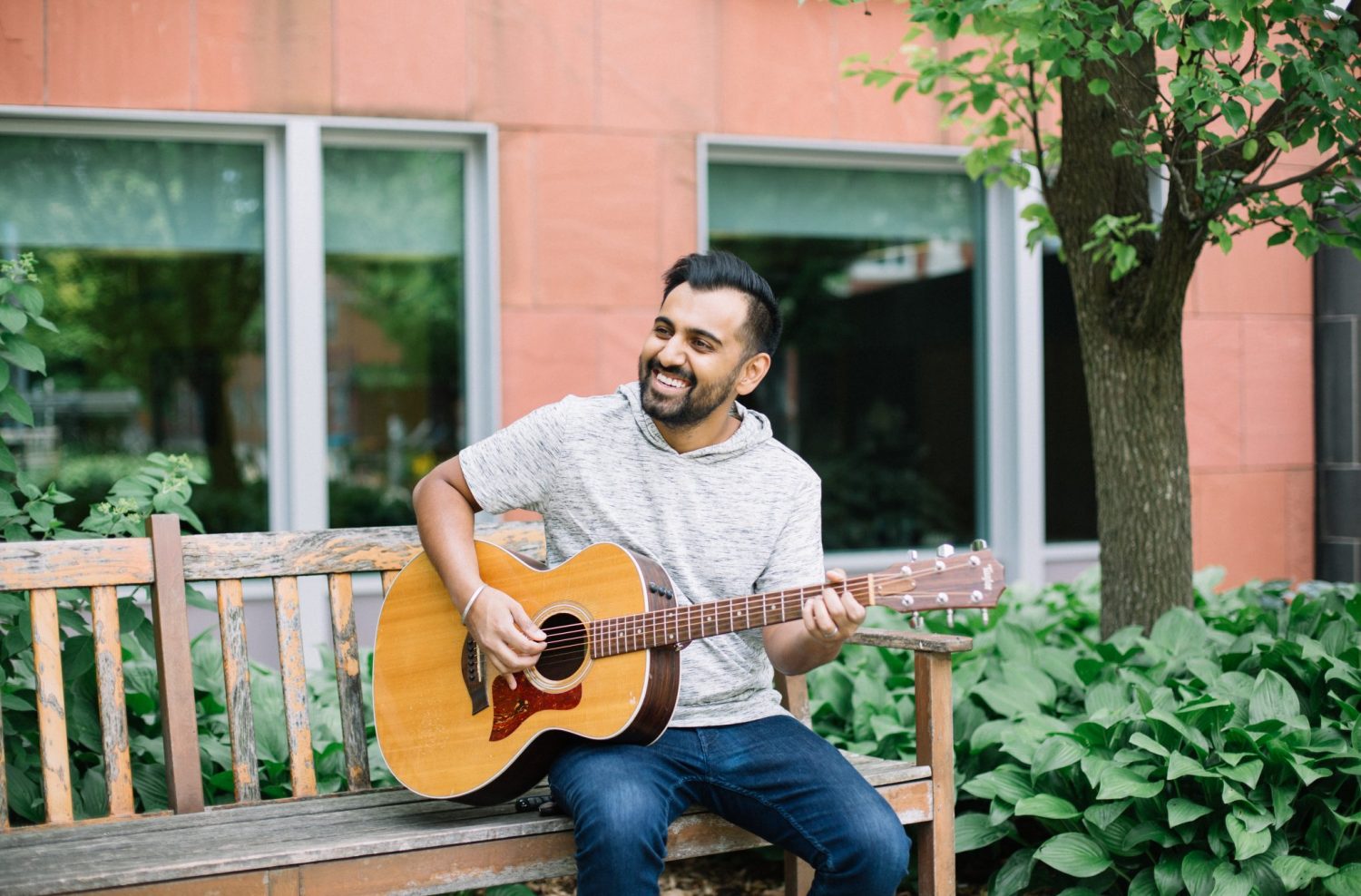 The Side Hustle: Mixing Tunes and Tech

Breaking into the music industry requires a lot of dedication, sacrifice, commitment, and self-motivation. All of that aside, if you’re passionate enough and you’ve fallen in love with the rush of performing live, it’s not something you give up on. That’s why local singer, songwriter and entertainer, Mandippal Jandu, has been performing music for nearly 20 years and while his career goals may have changed, he does not plan on letting go of this side hustle any time soon.

If you frequent Kitchener’s Rich Uncle Tavern or McCabe’s Pub, you’ve likely enjoyed some of his upbeat, interactive, live music. On top of working full-time at Vidyard and being a new father, Jandu has a repertoire of over 400 hit cover songs; he’s the guy that makes you want to stick around until last call.

“I got involved in music when I was about 15. I was in some high school musicals, eventually found a guitar and never looked back,” Jandu said.

“My sister actually started playing guitar before I did, so we had a band together when we were younger called Sibling Rivalry. We would play at bars in town and it was awesome experience to have as a young musician.”

Jandu is a self taught guitarist and has always been a strong singer. He also plays piano and drums out of interest, but as a solo musician, the guitar has always been his main instrument. For a long time, his goal was to be a full-time musician.

“I played all over the Kitchener-Waterloo and Toronto area, any shows that would book me, even the most random gigs. I opened at a metal show once for some reason. I played R&B shows, rock shows, multicultural events, even a funeral home … When you’re young and you’re just starting out, you’ll take any opportunity you can get.”

Jandu also spent a lot of time writing original songs which he would classify as a mixture of pop/rock, with an emphasis on pop. He released two EP’s during the height of his career as a solo artist: 2007’s When It’s Only Me Standing and 2014’s Ready to Stay.

As his last album title suggests, Jandu’s priorities shifted as he got older and music slowly became more of a side hustle because it allowed him to make room for other kinds of happiness.

“I met my wife eight years ago at a show I was playing, and once we got engaged, I realized I didn’t want to be away every night. She’s the reason everything changed for me.”

Jandu was used to working a full-time job for typically 40 hours a week and playing music for an extra 20 hours a week on top of that. After landing his job at Vidyard as a Technical Support Representative, Jandu found a lot more satisfaction in his professional career.

“I love working in tech and I love getting to help people. It’s one of the only industries that, as long as you are committed to your job, really encourages you to do your own thing on the side. Everyone I work with has some kind of side hustle, and a lot of them come out to support my shows,” he said.

For the past several years, Jandu has played three or four shows a week on average. He has dialed it back to one or two shows a week, since he and his wife recently became proud new parents, which completely adjusted their schedule.

“It’s tough to balance having a new baby, working a full-time job, and continuing to perform. It’s a lot of scheduling, but luckily, Vidyard was super supportive when my son was born which made the transition easier to manage,” he said.

At Rich Uncle Tavern specifically, Jandu is proud to be a part of their new event series called “Tech Nights” which, beginning this summer, will be hosted once a month. The next will be held on Aug. 15.

In addition to his performance schedule, Jandu added that he enjoys helping emerging musicians get started however he can and wants to do more of this mentoring in the future. He was a judge on the first season of a Canadian singing competition, The Shot and he also helps new musicians book shows.

“I really like doing that kind of thing because I didn’t have that support when I was younger, and there is so much more you can do on your own these days,” he said.

“I do what I do because it makes me happy. I love playing music, period. It’s always been fun for me to learn a song and put my own spin on it. The only place I’ve ever felt truly myself is when I’m playing a show.”