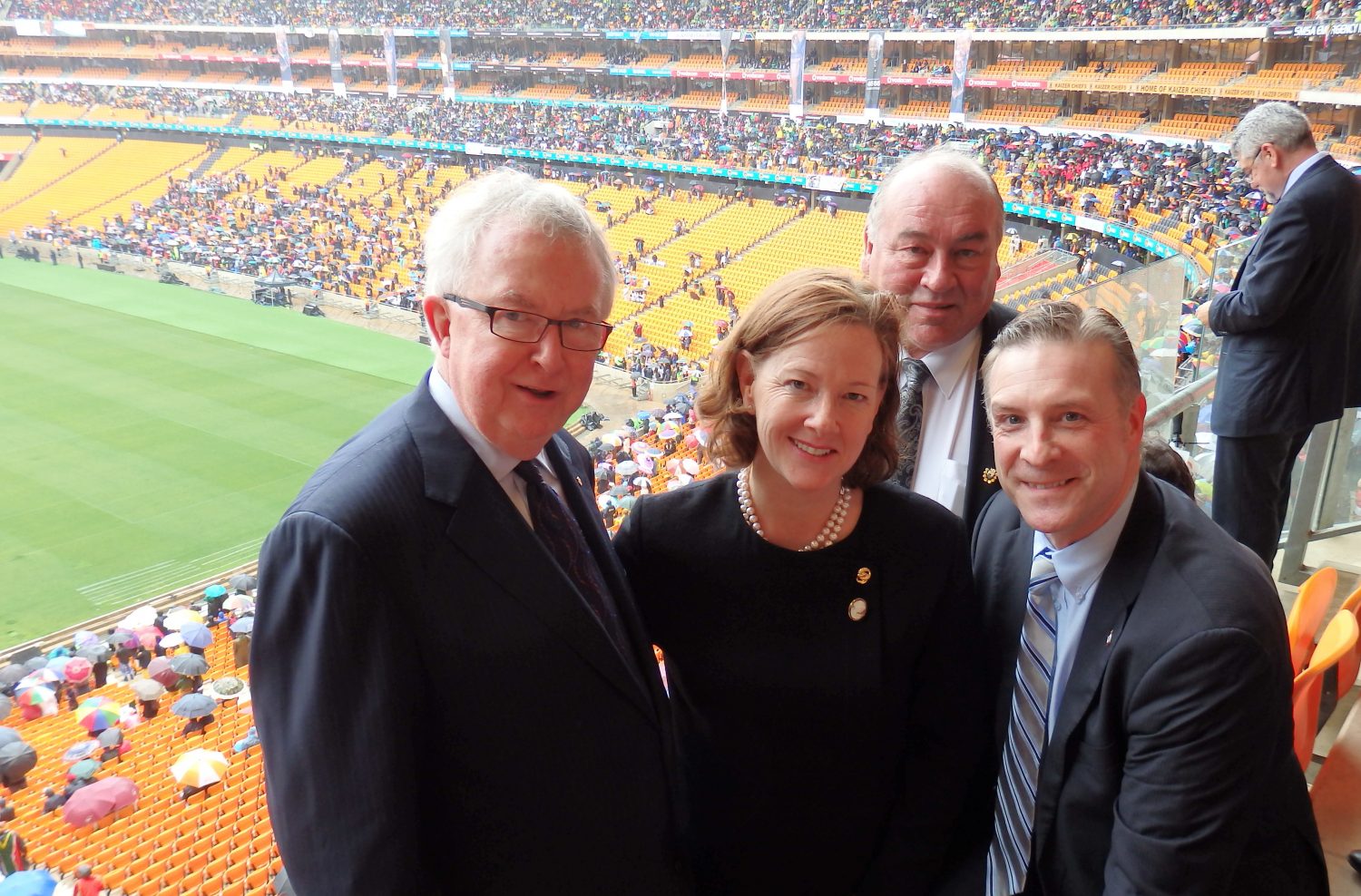 “The most important political figure of our lifetime”:

MP Peter Braid reflects on the life of Nelson Mandela

Peter Braid
Peter Braid is the Member of Parliament for Kitchener-Waterloo, and the Parliamentary Secretary for Infrastructure and Communities. He is also Vice-Chair of the Canada-Africa Parliamentary Association.

It was an honour for me to represent my constituents and all Canadians as part of our national delegation to Nelson Mandela’s memorial in South Africa in December. In my mind, Nelson Mandela was the most important political figure of our lifetime. He was a champion of democracy, a beacon of human rights and a model of forgiveness and reconciliation.

Canada played an important role in the international fight against apartheid in South Africa during the 1980s, and we had a very special relationship with Nelson Mandela. Canada was the first country Mandela visited in 1990, following his release from 27 years in prison, and during one of his subsequent visits he received honorary Canadian citizenship.

It was for these reasons that I was proud to help establish the new Mandela Scholarships as a way for Canada to celebrate Mr. Mandela’s life and legacy in a meaningful way. As Mandela himself said, “Education is the most important weapon which you can use to change the world.”

Together we attended the Mandela memorial at FNB Stadium in Soweto. This venue was symbolic — it was the last place where Mandela was seen publicly during South Africa’s hosting of the World Cup in 2010. We entered the stadium to the singing and dancing of thousands of South Africans. While there was a tinge of grief in the air, the atmosphere was primarily one of celebration. It was a rejoicing for what Mandela accomplished for their nation and gratitude for his long walk.

At the memorial ceremony, United Nations Secretary General Ban Ki-moon captured the essence of the man when he said, “Nelson Mandela hated hatred.” The highlight of the day, however, was the powerful speech delivered by President Obama, who was clearly personally inspired by Mandela’s example.

It rained that day, and it was unrelenting. Africans consider rain a blessing, and fitting on the day of a funeral.

“It’s as if the heavens were crying,” one South African said to me. Let freedom reign.

The following day, the Canadian delegation had the opportunity to pay our last respects to Mandela. He was lying in state at the Union Buildings, where almost 20 years ago he was inaugurated as the first democratically elected President of South Africa. We gathered with other international leaders, past and present, including F.W. de Klerk and U2’s Bono. The setting was serene and surreal.

As we left the Union Buildings, I realized how uniquely privileged I was to witness such an historic event. It is now in our hands to continue on the path that Mandela started.

There will be parks and streets named after Nelson Mandela, and statues built, but the greatest monument that we can build in his memory is a better society.

—
Peter has a degree in International Relations. Inspired by Mandela, he has developed a keen appreciation for Africa and has traveled there numerous times. You can visit his website at peterbraid.ca.