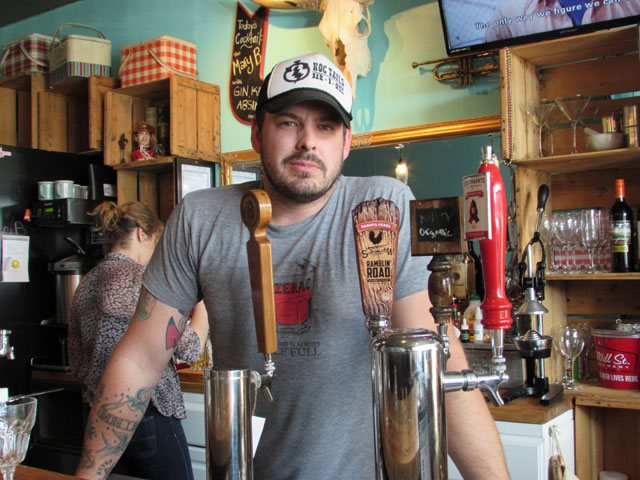 Smoke and soul at Hogtails

Pablo Picasso enjoyed it. Ernest Hemingway recommended drinking three to five of these in a row. It’s even been blamed for causing Vincent Van Gogh to chop off his ear. Absinthe, the high proof spirit alleged for causing hallucinations is featured in several of the specialty drink offerings at Hogtails in West Waterloo. Proud to be the only purveyor of the obscure spirit in these parts, Absinthe is only one of many noteworthy changes made when the restaurant changed ownership two years ago.

Partners Darryl and Sarah Haus took over the popular restaurant known for its authentic southern style barbeque last year. And while BBQ will still feature prominently in the restaurant’s future, the new owners have brought a recipe for buttermilk fried chicken that has quickly become the new star on the menu. It’s popularity has grown so fast that Haus is even rebranding around his new star feature.

“One of the most popular brunch items we have is friend chicken and waffles,” Darryl explains. “We serve it up for breakfast with collard greens and sausage gravy.” Another unexpected spotting of their famous fried is on a cocktail spear of all places, alongside a lemon wedge and a piece of celery on a tequila Caesar. 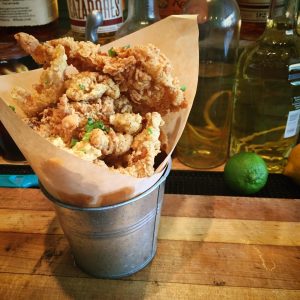 Rebranding was always in the plans for the Haus’ who set out to keep what they loved about Hogtails while adding their own stylings to the menu. Daryl has travelled extensively in the south, enjoying how each state has its own bent on southern cooking. Tennessee is the master of wet and dry rubs, while the Carolinas use a vinegar base for their sauce and Texas serves up its smoked meat with no sauce a’tall. His menu reflects the best of each locale, and brings new creativity (like pickled watermelon rinds or pineapple chorizo tacos) to the menu.

Eating in at Hogtails is worth the wait ( and there is almost always a wait). Your meal will start with a bucket of popcorn with bbq spices to nibble on while you watch a continuous marathon of the Dukes of Hazard. Sarah creates the constantly changing beverage menu of “porch drinks”, including southern classics like Mint Julep and traditional sweet tea. Try a meat sampler and you won’t be disappointed: barbecue ribs, fried chicken and pulled pork served up with warm cornbread, fries and coleslaw.

On Sunday mornings, Hogtails serves up traditional brunch fare with unexpected southern twists: cherry cola donuts, crawfish gravy and biscuits and cornbread French toast, for example. But, you’ll go back for the fried chicken. Haus brinds the boneless chicken before he soaks it in buttermilk for several hours. Then Haus dredges it through his flour and spice batter before frying. It’s the Real McCoy.

More than 20 years after Kentucky Fried Chicken became KFC to intentionally remove the word “fried” from their name, many of us still crave true authentic Tennessee fried chicken. And the Haus’ fried chicken is the very best you’ll find.

Debbie Frey is the owner and Publisher of New to Waterloo, an online resource for people moving to Waterloo from outside the Region or province.