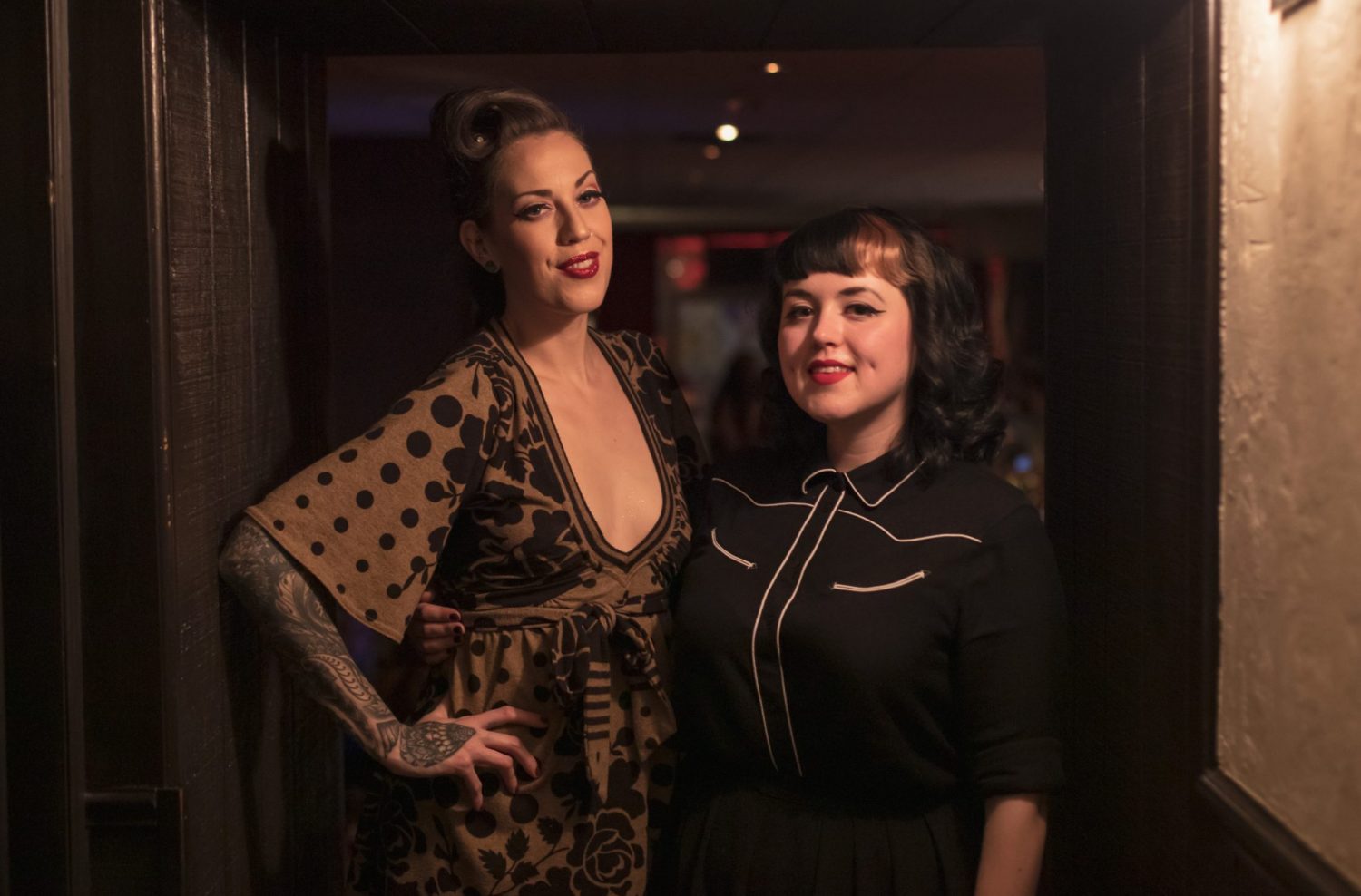 Show Me How You Burlesque

Just over a year ago, Annie Moore stopped in to one of her favourite restaurants, The Grand Trunk Saloon in downtown Kitchener, for a bite to eat. While she was eating, she struck up a conversation with owner Darryl Haus. Moore is a local burlesque dancer, on top of being a frontline worker for the local shelter system, and Haus had seen her perform burlesque previously in Cambridge.

Moore was taking some time off from performing and producing burlesque shows since her previous venue in Cambridge fell through, so Haus offered her a monthly spot at his restaurant. Moore agreed, excited by the opportunity, and alongside fellow burlesque performer and producer Ruby Krueger, the two have been producing Wild Wednesday, a monthly burlesque show at The Grand Trunk Saloon, ever since.

But, for both Moore and Krueger (which, by the way, are their stage names), performing burlesque has been more than just a year-long endeavour. Moore actually started almost 10 years ago. She said she had always been into the ‘40s aesthetic; her grandparents love for vaudevillian theatre also influenced her. 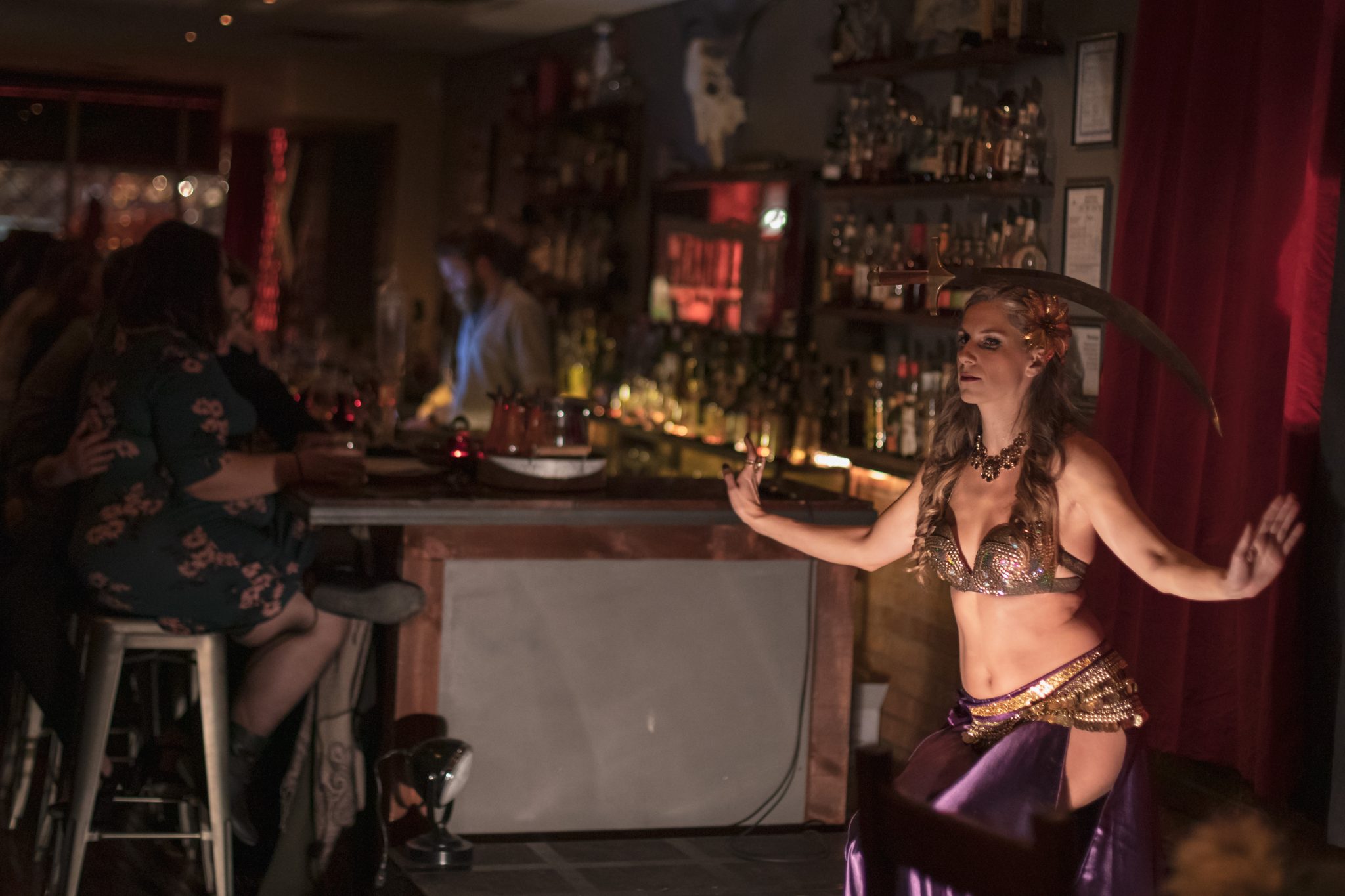 She started a rag-tag troupe with some friends, where, with the help of friendly collaboration and YouTube, she taught herself how to perform.

“We had no idea what we were doing, and to be quite honest with you, it was terrible. But it allowed us a lot of practice and growth,” Moore said.

Krueger, who currently works at a hair salon, got her burlesque start five years ago. She began as a belly dancer, but when her dance studio began teaching burlesque classes, she wanted to give it a go.

“I didn’t realize it was something people still did. I thought you had to be Dita [Von Teese] in order to be doing burlesque,” Krueger said.

“Annie and her crew actually took me in and it’s been a wild ride since.” 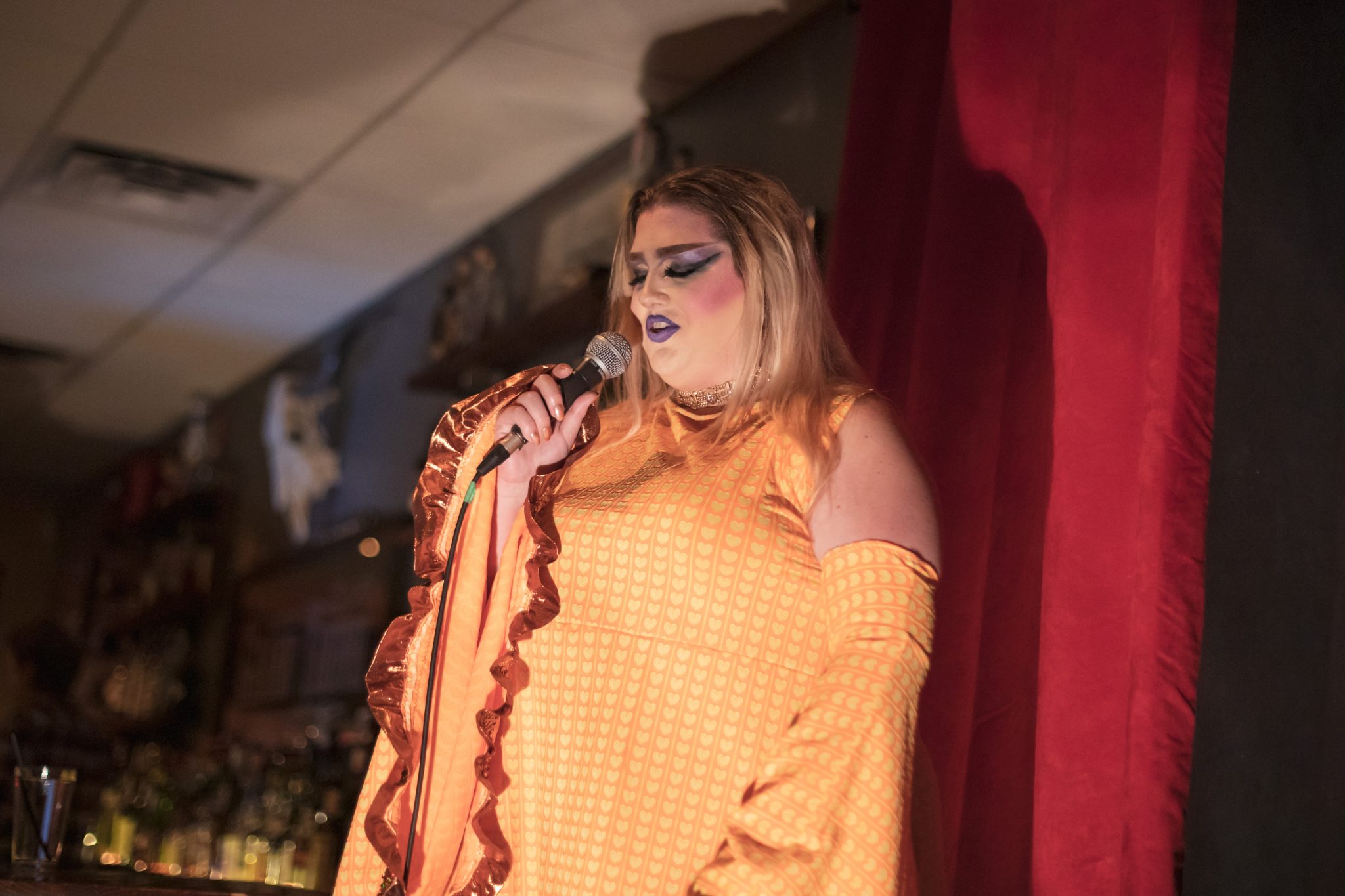 Under the names Vixen and Tease, the two began producing shows together — meaning they curate the set list, seek out and book performers, promote the shows and ensure everything goes smoothly the night of.

Most of us don’t have a ton of experience with burlesque outside visions of Cher and Christina Aguilera strutting their stuff in the popular movie. So, for the inexperienced audience member, what exactly can one expect from a burlesque show?

“Burlesque is kind of like a throwback to old vaudevillian style performance art. It’s a lot of striptease — a little heavier on the “tease” than “strip,”” Moore explained. “It’s predominantly the art of tease.”

And that’s exactly what it is. On Nov. 21, I sat front row at my first ever burlesque show at The Grand Trunk Saloon. I didn’t really know what to expect, but Moore and Krueger promised diversity — and that’s what I got.

The show was hosted by Guelph-based drag queen Athena McQueen, and the show rotated through three different performers — Miss Boom Boom Knox, Olive Von Topp and Annie Moore, herself. Krueger took a backstage role in this show, as it seemed she was responsible for ensuring that everything ran smoothly.

The night was a blast; Athena McQueen offered comic relief as she introduced each new performance, and even performed herself. Olive Von Topp offered a mixture of danger and sex as she balanced a sword on her head. Miss Boom Boom Knox’s performances were like blasts from the past with over the top, thoughtfully selected costumes. Moore’s performance was dreamy, as she appeared on stage almost naked, but holding two large white feathers that she used to accentuate the tease. Each performance was so different, and the audience’s responses proved the night to be a success.

Moore and Krueger explained that they don’t walk away with a full wallet after putting on these shows; their main priority is to make sure the performers are paid and that there is money left over to invest into the next show. The costumes and props can get expensive.

“We do it because we enjoy bringing the joy to our audience,” Moore said. 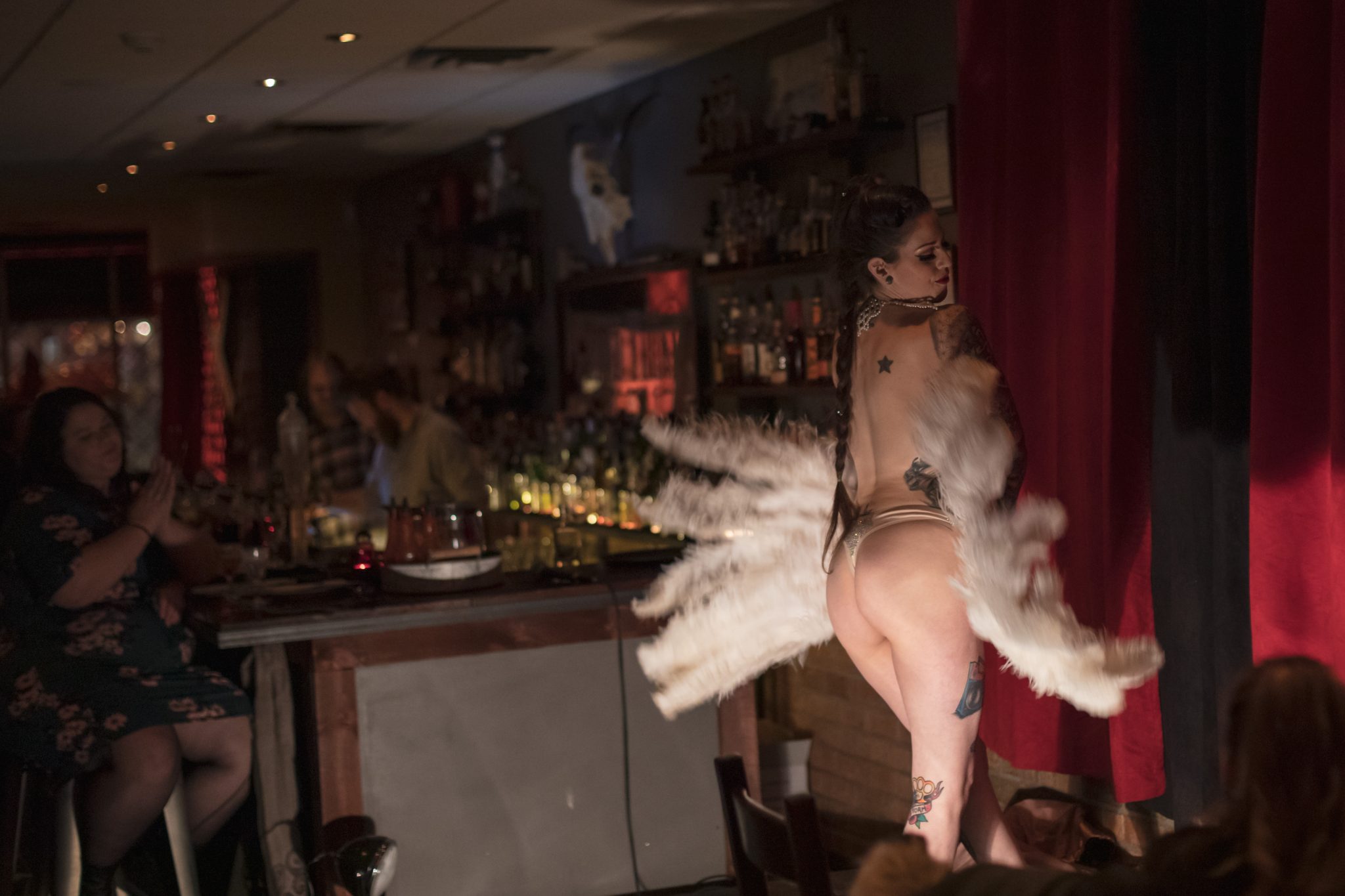 The main audience demographic at Wild Wednesday is usually groups of middle aged women, Moore and Krueger said. Some of these women have even expressed that they would like to try performing, too.

Moore explained that one of the biggest misconceptions surrounding burlesque is who can do it. She said that a lot of the women who express that they would want to try it often counter that statement by body-shaming themselves.

She said that the idea that you have to be a thin cisgender woman to perform burlesque just isn’t true, and she and Krueger are working really hard to break down any barriers.

“If you look at the current burlesque scene, a fair amount of my favourite performers from all over the world are of varying body types and varying skill sets and varying levels of dance. I think the biggest misconception is that you have to be a Dita,” Moore said.

Moore and Krueger are always accepting of new performers and will  help anyone who wants to give it a try.

“Here, because of the type of venue we have, it’s a little easier for new people to get on stage and we like to encourage it because we want our community to grow. We have no interest in being exclusive. We don’t want it to be about Ruby and Annie all the time,” Moore said.

“My first time on stage was a nightmare,” Moore joked. 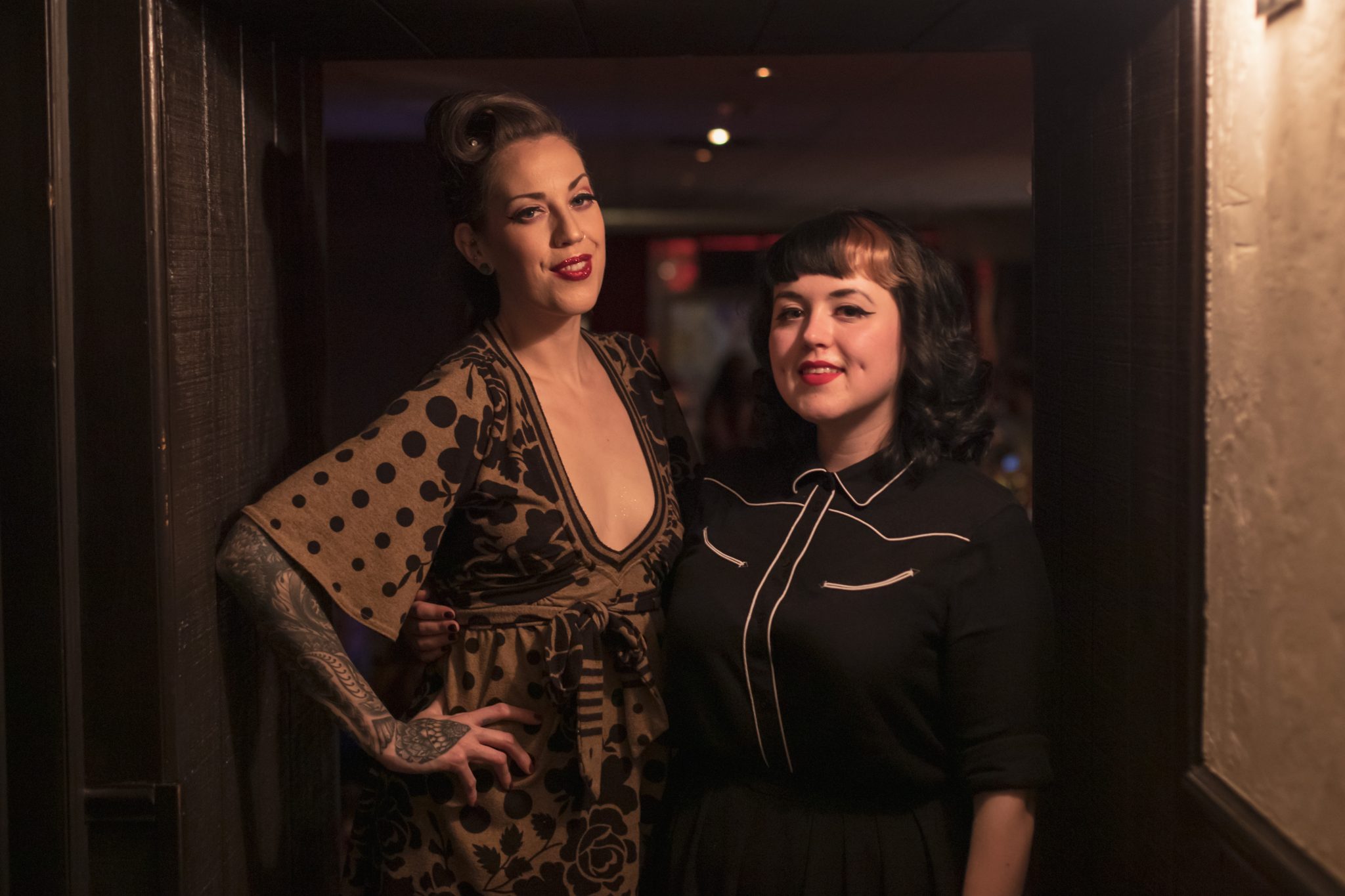 While burlesque classes offered in KW are limited, Moore and Krueger said that there are really great classes offered in Guelph by a group called Femme Rebelle. This group offers classes for those who want to incorporate some form of nudity, but also for those who do not. Moore and Krueger said that taking a class is a great way to get more comfortable with performing on stage.

In that same breath, the two producers have a zero tolerance for bullying or shaming at their shows — that goes for audience members and how performers treat each other. Because burlesque is such a vulnerable art form, they choose to only work with others who deal with it gracefully. They will stop working with those performers who do not uphold an inclusive attitude.

“One of the biggest things we’ve been pushing is a positive community and a positive space, here, so we always make sure that it’s a super supportive crew that’s on hand. There’s always encouragement. There’s no negativity. We ensure that there’s great body positivity,” Krueger said.

“We want it to be a safe space here for everybody, regardless of who they are and where they come from.”

But it doesn’t just end with misconceptions about body type, Moore and Krueger also explained that there’s sometimes confusion between the differences between performing burlesque and stripping.

“Another thing that happens quite a bit … that I think needs to simmer down a bit is when people refer to it as classier than a strip club and comparing it to a strip club stripper. [When you do that], you’re shaming. One’s not better versus the other, they’re just different,” Krueger said.

Moore explained that there’s much more athleticism in stripping. Stripping also usually involves full nudity, while in burlesque, the performers usually wear pasties and panties throughout. 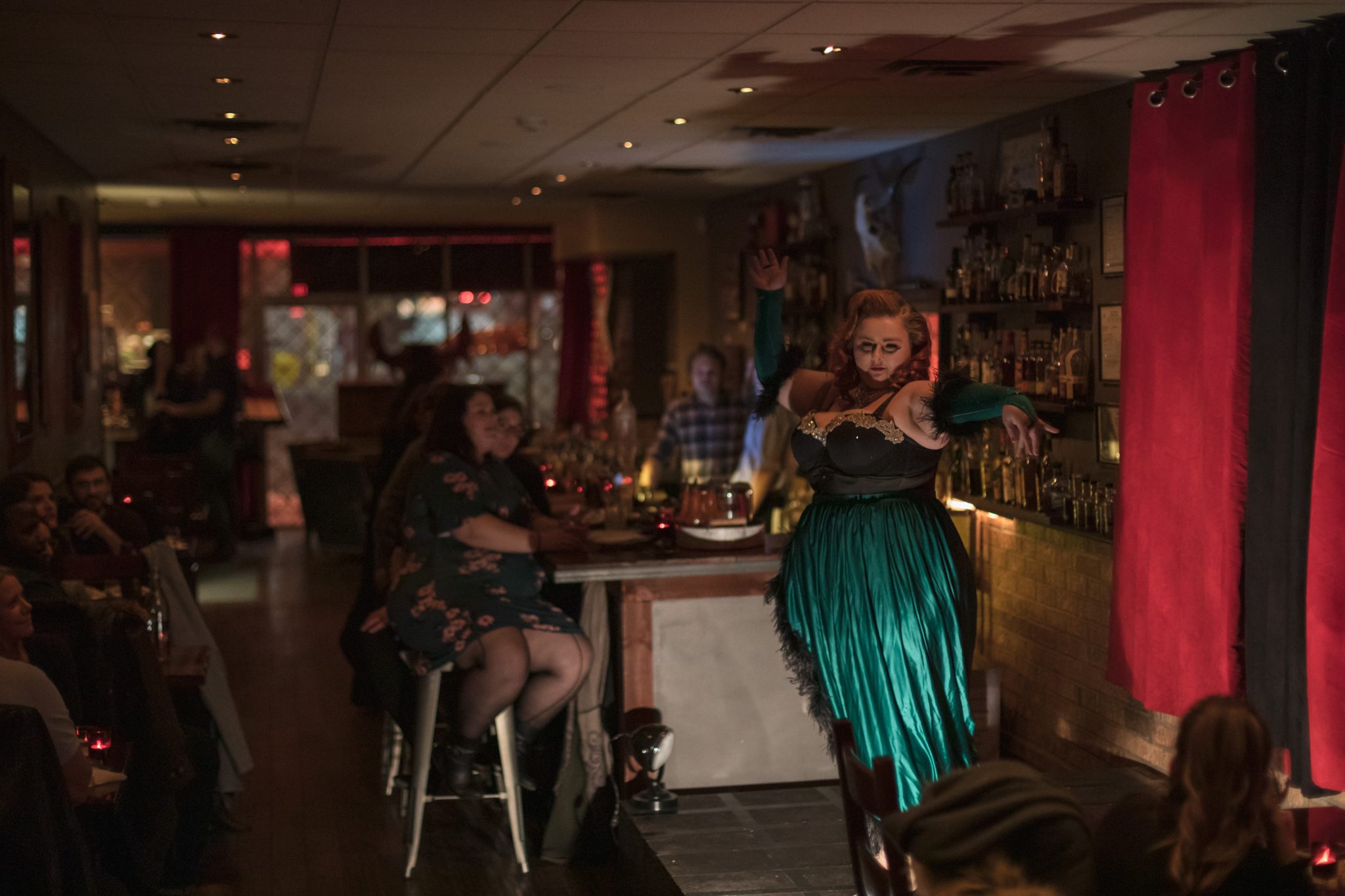 As Vixen and Tease enter the new year, they don’t show any signs of slowing down. On top of continuing on with the monthly shows at The Grand Trunk Saloon, they will also be producing less frequent shows at Patent Social in Waterloo.

Krueger echoed this, but also encouraged some of those shyer women to try it out.

“I hope to get new performers. I want more of those older women who say they wish they could do it [sic],” she said.

While Moore says she’s happy with the community they’ve built, and forever grateful to The Grand Trunk Saloon for their constant support, she hopes to see the community of burlesque performers, supporters and audience members continue to grow.

“Community makes it so much more fun. You have more people to work with and bounce ideas off of. Our main goal is just seeing growth in the community and maybe more cohesiveness from performer to performer as far as that community goes,” Moore said.

“There’s something to be said about these small intimate venues where we can really connect with our audience.”

The next event that Vixen and Tease are gearing up for is their New Year’s Eve speakeasy to be held at The Grand Trunk Saloon on Dec. 31.