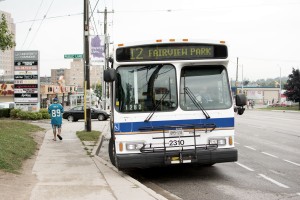 Changes to several GRT routes are coming as a a result of the 2014 budget. • KHA VO CCE CONTRIBUTOR

$1 million in discretionary benefits approved; Some GRT routes to be restructured

After almost five hours of debate, Regional Council passed the 2014 budget on Wednesday.

The new budget will increase taxes by 1.86 per cent – an impact of about $32.38 per household. Councillors had hopped to keep the tax increase under two per cent this year.

Major budget amendments included a .25 per cent cut to the funding allotted for Rapid Transit Master Plan (RTMP). Though some councillors expressed concern over the cuts, council decided to proceed to allow more funding to be directed to Ontario Works discretionary benefits.

Discretionary benefits provide services such as dental care to people living in low-income situations. Council permanently allotted $500,000 to the benefit, on top of a one-time contribution of $500,000.

However, the LRT project was still a major point of discussion throughout the evening.

Cambridge Mayor Doug Craig hoped to introduce a proposal to defer contributions to the RTMP fund until 2015 and have staff reassess phase one of the rapid transit plan in order to produce options on how to reduce costs overall.

However, Craig was not allowed to introduce the proposal due to a procedural by-law that doesn’t allow councillors to introduce motions on items they have voted against. Craig did not vote in the original LRT vote because at the time he had declared a conflict of interest.

Craig was also the sole vote against passing the 2014 budget, citing concerns about the amounts allotted to Waterloo Regional Police Services and road refurbishment.

He told the Cord that should he be re-elected in 2014, he fully intends to raise his motion again and that his stance against the LRT project will be a key component of his platform.

Other key changes as a result of the 2014 budget include:

Police and library budgets pass relatively unscathed: Though there was some debate early in the meeting over whether to allot an additional $200,000 to Waterloo Regional Police Services to help them upgrade their IT services, their budget, as well as the library’s, were passed as they were presented. However Councillor Rob Deutschmann did successfully pass a proposal requesting that WRPS produce a multi-year staffing and budget plan.

Arts and culture funding reduced: $115,000 was cut from the funding to cultural sites, including the Josef Schneider House in downtown Kitchener. Practically, this means some of the site will have to restructure how staffing works – which may include the loss of several student positions.

Road repairs on hold: Council also decided to reduce the contribution to the roads rehab reserve by $1 million, and defer another $1.25 million. As a result several long-term roadwork’s projects will be delayed or removed from the 10-year roads rehabilitation program.