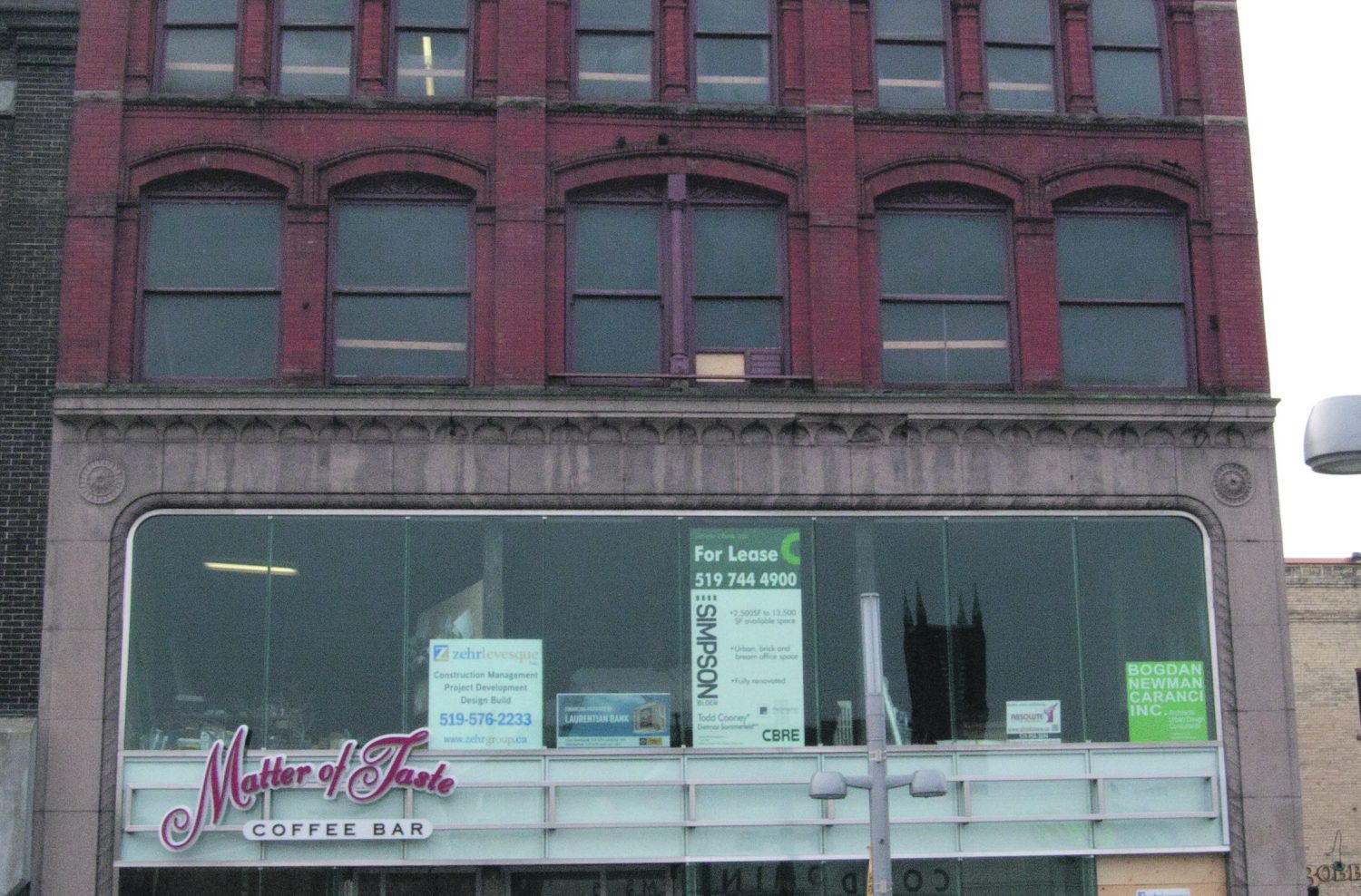 The Simpson Block, a designated historic site, is almost ready to for a fresh start – HG Watson, Associate Editor

What did it use to be?

From its red-brick façade to its factory warehouse windows, 117 King St. provides a glimpse into a time when Kitchener was still known as Berlin. Built in 1895, the four-storey building that sits in the heart of downtown Kitchener.

117 King St. bears the name “The Simpson Block” in honour of William Simpson, who had the building constructed as a furniture store and warehouse.

Over the years, the Simpson block was owned by the Mennonite Publishing company, before Tri-City Music, coffee store Matter of Taste and The Bead Boutique moved into the bottom two floors, with the top floors only being used for storage.

Last summer a Toronto development company paid just over $1 million for the building with plans of converting it into office space. Of the three existing businesses, only Matter of Taste stuck around.

That was where Joseph Bogdan and his architecture firm Bogdan, Newman and Caranci came in.

“The idea is to revive and revitalize the building both internally and on the King Street façade, recognizing its heritage aspects, but at the same time bringing it up to the 21st century,” said Bogdan.

When it’s completed, the Simpson block will be home to multiple new tenants, the highest profile being the CBC. The building will serve as the new Kitchener-Waterloo broadcast centre for CBC Radio. Susan Marjetti, managing director of CBC for the Ontario Region said the location would be ideal because it would put the CBC “in the middle of the action.”

When will it be finished?

According to Bogdan, the project is in it’s “final stages” which is cause for further excitement for local fans of the CBC. It appears the public broadcaster is all but ready to set up shop. While there is no set date, a CBC press release said the new K-W station would begin broadcasting “this winter.” Considering CBC has already posted jobs for the K-W station, it’s likely to be sooner rather than later.

The building’s other tenants will include an office as well as technology and marketing firms. According to Bogdan, the retail storefront on the ground floor will remain.

Whenever the new 117 King does open, it will be the latest example of a re-vitalized industrial building Kitchener has become known for. “Downtown Kitchener has a real wealth of these early 20th century factory buildings,” said Bogdan. “They’re very adaptable and I think it’s right not to knock them all down.”