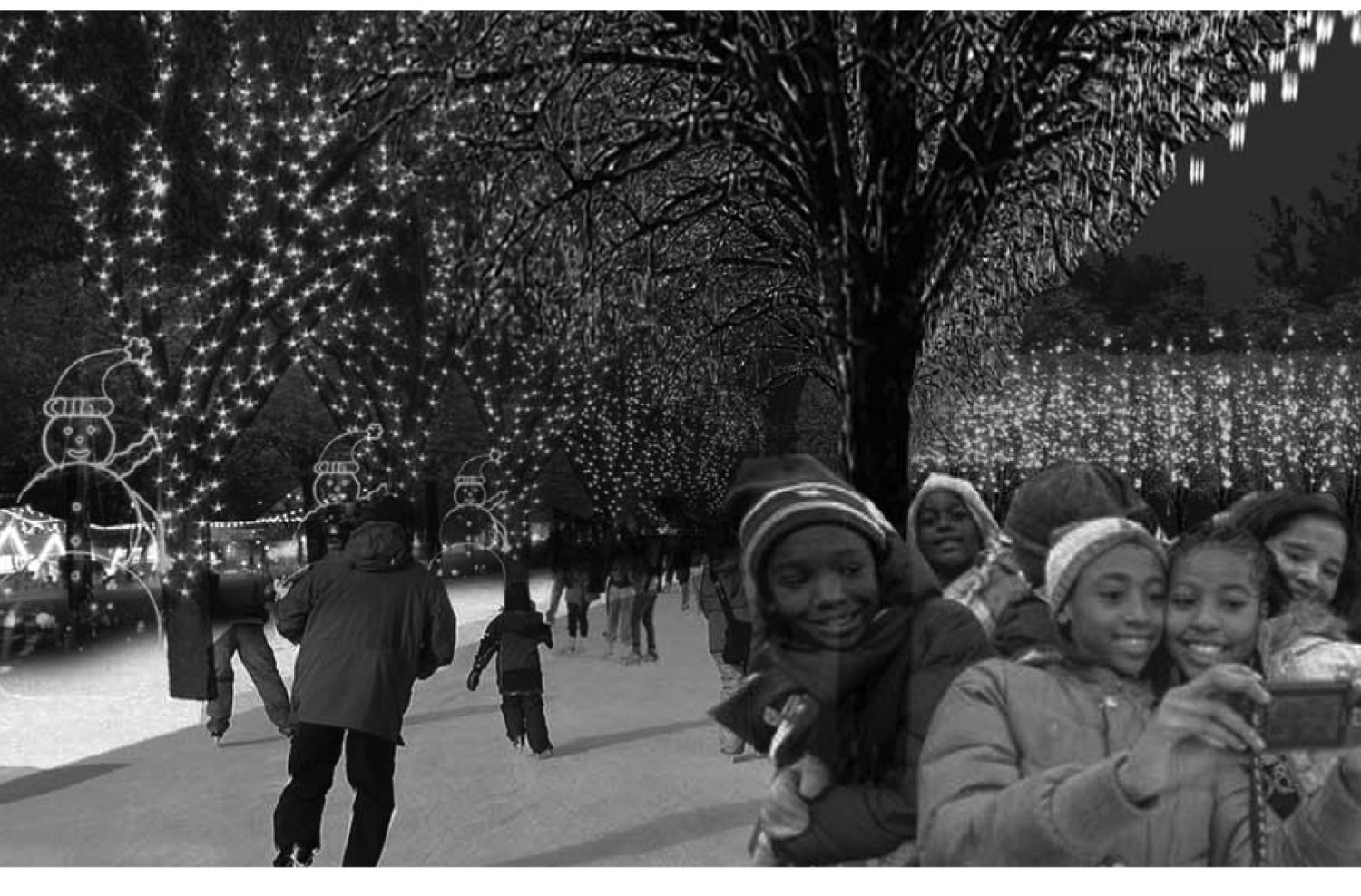 Party in the park

A conceptual image depicting future winter festivals in Waterloo Park’s revamped Festival Area. The area will be located on the park’s west side. • COURTESY OF THE CITY OF WATERLOO

The City of Waterloo is looking to give Waterloo Park’s west side a more defined identity. According to City landscape architect Eckhard Pastrik, while the east side of the park – closer to Uptown Waterloo – is well established, “the west side, which evolved over time, having parcels of converted industrial land added to it, people didn’t even recognize that was part of Waterloo Park.”

The west side of the park — the area along Father David Bauer Drive, immediately across the street from the Waterloo Recreation Complex — will soon see several changes, with some coming as early as this summer.

“One of the reasons we chose that [area] was that it has street frontage,” said Pastrik. “The space right now is pretty well wide open. Along that street front, we have essentially just the skate park right now.”

While the Waterloo Skatepark, which officially opened last spring, will be included in the park’s future, the area around it will see significant improvements.

According to Pastrik, the updates to the west side of the park are aimed at making the area are more efficient community space. The changes will include the addition of a playground, communal picnic area and, most notably, an open area known as the “Festival Heart,” a gathering area that can hold more than 5,000 people, all within what he calls “an atlas of green rooms.” These green rooms are essentially parts of a planned arboretum, each with a specific function. The city hopes these elements will combine to turn this part of the park into a festival area.

“The festival area was a community-oriented use that was missing,” said Pastrik. “The park, over its history has supported festivals of various scales and we wanted a festival space that could accommodate that kind of use.”

The planned festival area will be integrated into the park’s green space — with the Festival Heart replacing existing softball diamonds — and, according to the City’s plan, house events such as open-air movie nights, Waterloo’s existing “Wonders of Winter” event and graduation ceremonies, while also serving as a general, open community space. The planned festival area is part of the new master plan for Waterloo Park, which City Council approved in 2009.

“There was an existing master plan, but it was done in 1989, I believe, and it was extremely outdated,” said Pastrik. “A lot has changed in the community, particularly around the park with increasing intensification, higher densities and the emergence of some world class institutions… The original master plan was just outdated. It didn’t really reflect the diverse interests of the community today.”

The master plan as a whole is a 20- to 30-year vision. However, according to Pastrik, the city had to identify which projects to commence first. The west side updates, namely the arboretum and festival area, are among these initial projects.

“Because we had a specific amount of funding on an annual basis, we couldn’t do it all at once, so we developed an implementation strategy and we set out some priorities,” he said. “One of the highest priority initiatives was the development of the festival area.”
While the festival area is a priority for the short-term future, it will not spring up overnight. Pastrik said that in the immediate future, the city is focusing on constructing the new playground area, making it the number one priority for this summer.

When it comes to the importance of this project, Pastrik did not undersell the impact he sees Waterloo Park having on the future of the city.

“I don’t think this community recognizes the importance of Waterloo Park. I would compare to a Central Park in New York,” he said. “It’s absolutely fundamental to the community. Having a community-wide green space in the core of the intensifying area is just incredible.”

Pastrik added that the Waterloo Park task force, who came up with the master plan, also scored a “huge win” in convincing the Region to plan for a stop on Waterloo’s Light Rail Transit Line — which is expected to be up and running by 2017 — in the middle of the park at Seagram Drive.