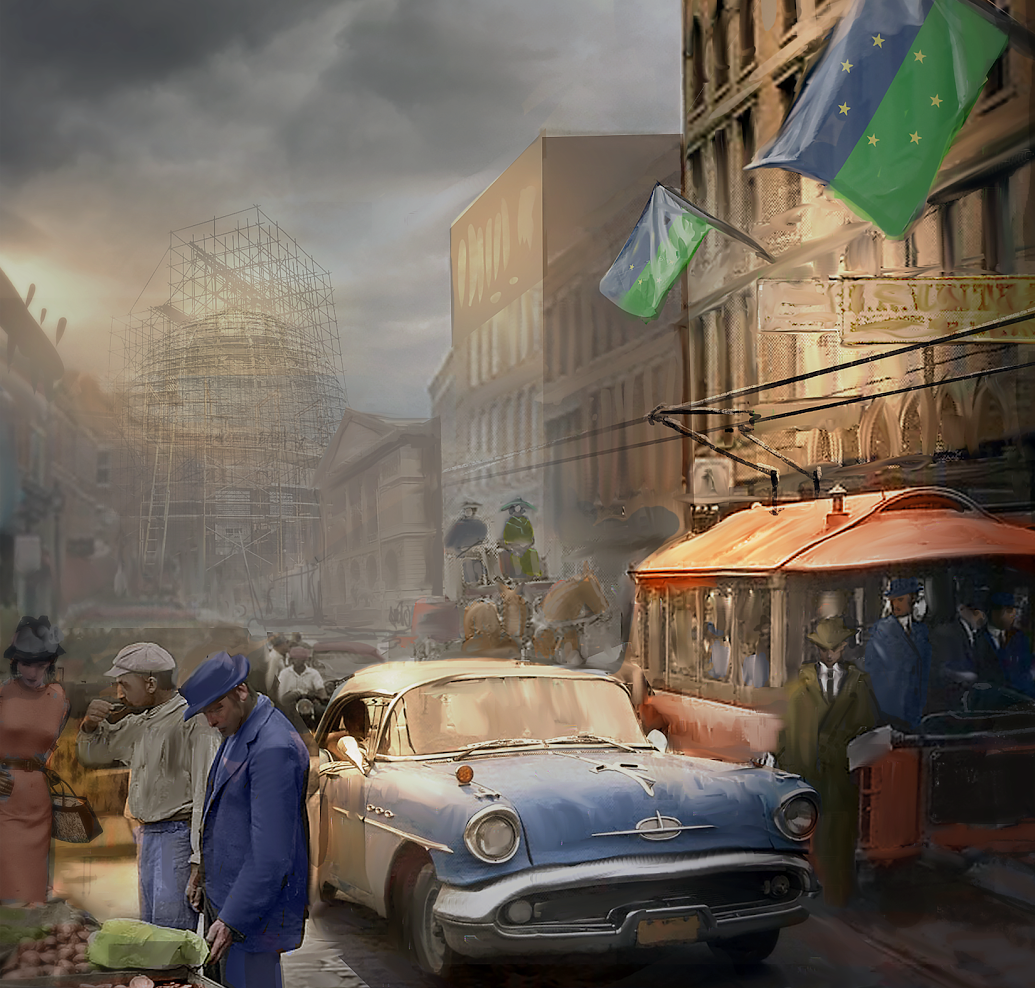 A lot has changed since 1916. In present-day Kitchener, the colourful mix of transportation technologies on display during the morning commute has been overtaken by a steady stream of cars, with a few buses and bikes offering alternatives for the less well-to-do. Although technology has advanced, the range of options has narrowed. For most people working most jobs, a car is the only practical way of getting around.

Meanwhile, for a growing number of Kitchener residents, steady employment in the industrial or farming economies has also become a thing of the past. If you can’t land an overpaid tech job or a unionized public sector job, chances are you’re among the thousands in our region competing for an underpaid service job – or several at once. Shouldn’t technological progress have sorted this out by now?

Retrotopia opens in the year 2065, several decades after a second American civil war has partitioned the nation into several independent republics, each dealing in its own way with the effects of climate change, energy insecurity and a volatile global economy. But don’t shelve this title with the mass of dystopian fiction that’s appeared in recent years: Retrotopia belongs to the venerable genre of utopian fiction. It’s about a society that works.

The story follows Peter Carr, an east-coaster on a diplomatic mission to the midwestern Lakeland Republic, an area known in our time as the Rust Belt. Lakelanders haven’t forgotten their history of economic pain. The lessons learned during the late 20th century have made them extremely reluctant to rely on industrial automation and global trade.

In fact, they’ve made technological change a matter of democratic choice, on a county-by-county basis. Anyone in the Lakeland Republic can own and use almost any technology they choose, but the county government will only fund and build the infrastructure necessary to use that technology if local taxpayers vote for it. Thus high-tech counties have high taxes and low-tech counties have low taxes – it’s as simple as that.

The result is a colourful mix of technologies old and new. On the streets of Toledo, Ohio, electric streetcars share the roads with horse-drawn taxicabs, novelty automobiles and pedestrians going to and from work. Sound familiar? The difference between our 1916 and their 2065 is that Lakeland law guarantees that none of these technologies receive a free subsidy.

No free subsidies means no government grants for auto factories, no regionally-funded cycling programs, and no light rail construction without a clear electoral mandate. Take away the subsidies that prop up the various technologies competing for market share in our world, and they’d have to compete on equal economic footing.

But why would anyone voluntarily give up 21st century technology? At this point it’s worth calling to mind a certain group of 19th century English textile workers known as the Luddites, who gained infamy for smashing automated factory machinery. They foresaw, correctly as it turns out, that the new machines would make their skilled labour expendable. Their uprising made the point that technological progress wasn’t inevitable, but rather a choice made by the factory owners and backed up by the British army. More to the point, it was a choice that was not in everyone’s best interest.

You’ll have to read the book to learn how it all fits together, but it isn’t giving too much away to reveal that in the course of his travels Peter Carr encounters a factory powered entirely by human muscle, an astronomy professor who calculates orbital trajectories without a computer, and the Lakeland Republic’s most popular sporting event: the annual Drone Shoot.

Like most utopian novels, this is neither a character drama nor an extended action sequence; it’s a walking tour of a place you might like to move to someday. That said, there are enough well-timed surprises that by the time things start to heat up in the book’s second half we’re invested and eager to see how Greer’s imaginary country stands up in a crisis.

Retrotopia is the kind of book that makes you nostalgic for our region’s possible futures.