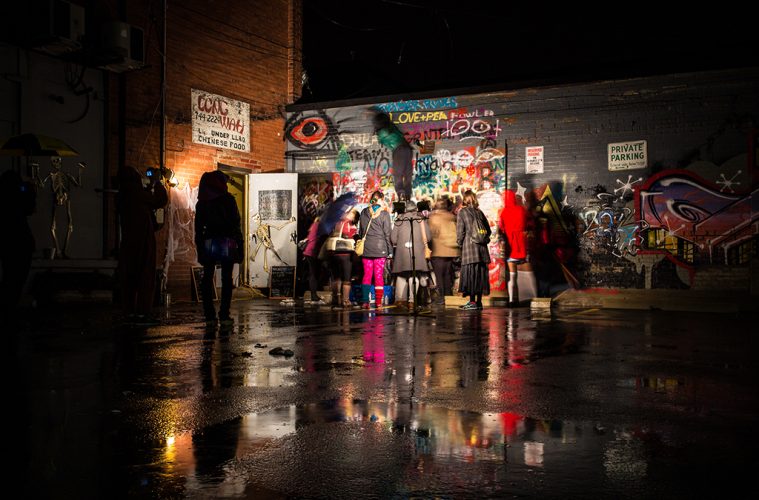 Weather was not on the side of Night\Shift this Halloween weekend. Like the frigid cold temperatures that festivalgoers faced during last year’s event, the weather dampened outdoor attendance, but not our spirits. Along with hundreds of other community members I dashed from THEMUSEUM to Centre in the Square to 44 Gaukel to venue-formerly-known-as The Marisol to avoid the rain. However, staying inside would mean missing some of Night\Shift’s best installations.

We spray painted the outside of Café Pyrus, wandered through a light maze, went to a silent drive-in and watched a City in Motion in Goudies Lane—all outside.

“We wanted people to make their mark,” said Tyson Reiser, the owner of Pyrus. The café team wanted their installation to be interactive, which was well-achieved. The building’s landlord offered a section of the wall for the activity and will leave the resulting art until at least the spring. Reiser said he hopes the wall demonstrates our need for public art funding. As a life-long rule follower, I felt pretty badass spray-painting “TCE” on a wall I walk by daily.

“A lot of people were really happy to get into spaces they don’t normally get access to,” said festival director Eric Rumble.

We mingled in a Gatsby lounge at the Marisol and at KWAG danced to 70s jams in a rec room that looked like basements across the nation. The latter seriously delivered, with shag carpets, retro sofas, a glitter cat sculpture and flowing white russians. My time-travel dreams were realized under the light of a disco ball, surrounded by bell-bottoms and Tom Selleck mustaches.

Immigrants’ stories told through lanterns, a crash course in coding, a tour of sad graffiti and a lot of live music brought us from one side of downtown to the other, to experience the darkened streets of Kitchener in a new way.

This year, Night\Shift organizer Eric Rumble launched a FundRazr crowdsourcing campaign to support the artists and contributors. Just over 30 per cent of the goal was reached, but Rumble was unfazed, saying that “$2,000 in support from anonymous individuals is awesome, I’m really proud of that. It allows me to make sure that everyone who contributed at least gets something.” 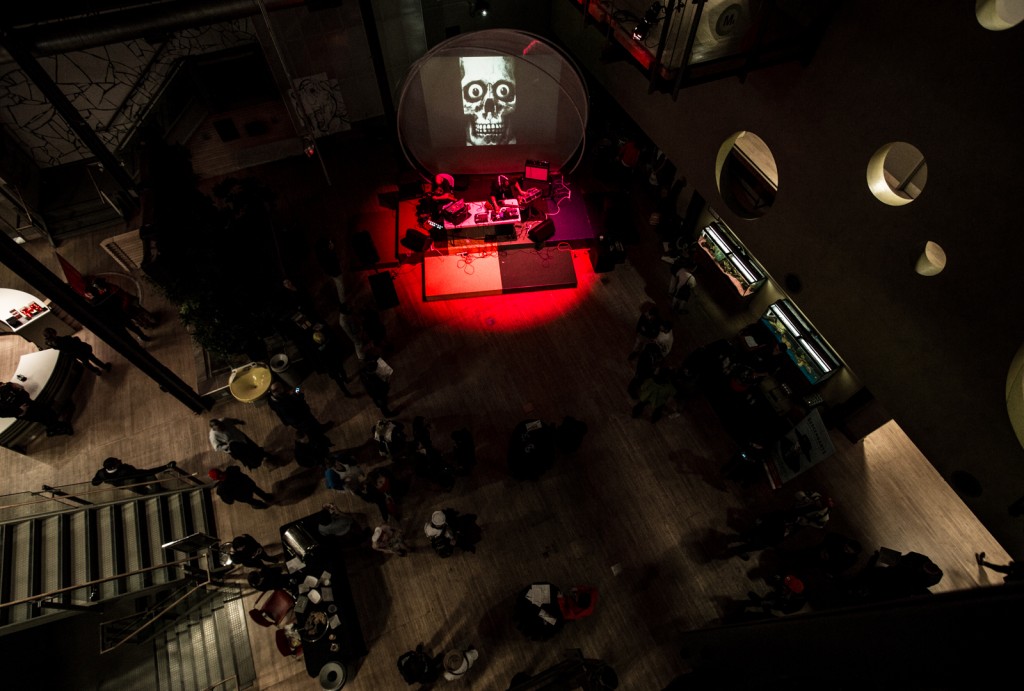 If the unsuccessful crowdsourcing hurt the festival at all, it was not felt by attendees. Each installation was fueled by love of art and community, bringing creators and consumers together to experience all that downtown Kitchener’s streets and structures have to offer.

My night ended in the basement lounge of Centre in the Square—normally reserved for members—where I sipped Block 3 beer and listed to the “deep dance music” of Machines of Loving Grace. The scene perfectly summarized Night\Shift’s jam: community, art, experimentation, and a little weirdness.

With our clocks turning back, downtown Kitchener gained an extra hour of animation at a time that, most days of the week, would be relatively quiet. Night\Shift makes it clear that no amount of cold, rain or costume parties to attend will stop our community from keeping downtown vibrant.