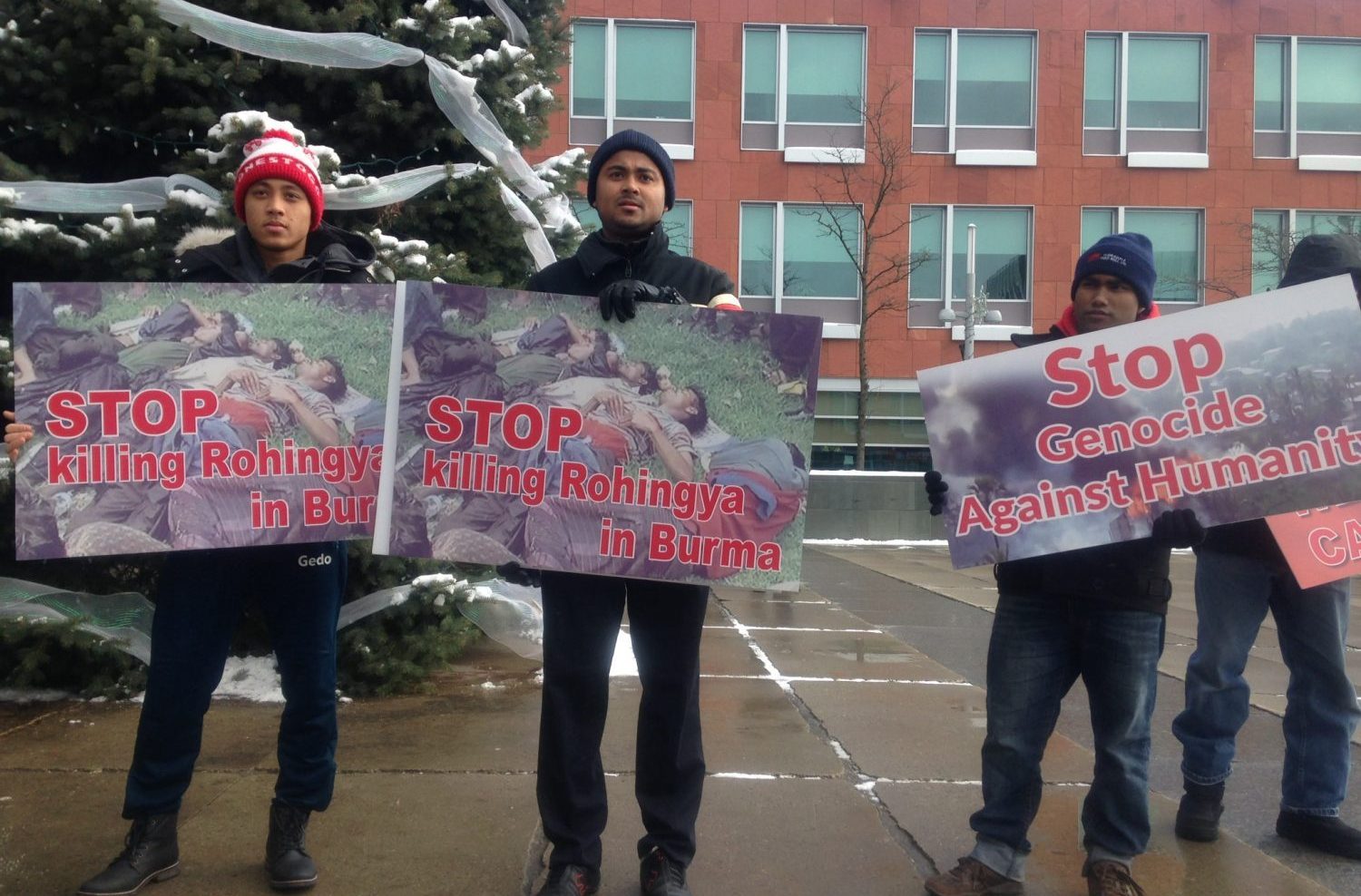 Anwar Arkani says he has barely slept since Oct. 9, when Myanmar’s military ramped up its indiscriminate killing of Rohingya civilians, including members of his extended family. Various international agencies say the state violence underway in northwest Myanmar (formerly known as Burma) constitutes crimes against humanity, if not genocide.

“I still have brothers and sisters there, though most of them have been killed. And they call me all the time. Somebody advised me, don’t look at your phone, but it’s not possible. By God, I wish I couldn’t read or hear, my life would peaceful. I know it’s impractical, but that’s sometimes how I feel,” said Arkani, who is chairman of the Rohingya Association of Canada. He estimates that about 70 members of his extended family have been killed in the last decades in Burma.

The Burmese government says its current violent campaign is meant to find and punish those responsible for an October attack that left nine soldiers dead. Others point out that the targeted extermination of an ethnic community is never a justifiable response to particular instances of violence.

Until Arkani arrived in Canada 19 years ago, as a refugee, he was stateless. The Burmese government stripped the Rohingya of national citizenship in the early 1980s, and the neighbouring Bangladeshi government continues to reject their asylum claims, a situation that has led a United Nations official to describe them – before this most recent iteration of ethnic cleansing – as “the world’s most persecuted people.” Indeed, the Rohingya are especially vulnerable because they are not citizens of any country. Though we often invoke the abstract notion of human rights (for example at a genocide protest), for the most part we meaningfully have rights and get to exercise them because our national governments make it so. Well aware of this dynamic, the governments of Myanmar and Bangladesh continue to refuse such rights, believing it’s unlikely that outside parties will intervene.

Arkani estimates there are 35 Rohingya families in Kitchener Waterloo, while hundreds of thousands are stuck in a violent limbo in internally displaced persons camps on either side of the Myanmar-Bangladesh border. We talked on Dec. 10, international humans rights day, while he and many others demonstrated in front of Kitchener’s city hall to raise awareness about the genocide.

“Without intervention these people, our people, will be finished,” he said that bitterly cold day. While Canada’s Minister of Foreign Affairs recently tweeted about the situation, expressing concern and a desire for humanitarian access, Arkani is not satisfied. “We’re trying to tell the Canadian government to say something, do something.”

Walking to the demonstration I thought of Susan Sontag’s book, Regarding the Pain of Others, in which she writes that, “being a spectator of calamities taking place in another country is a quintessential modern experience.”

I had earlier that morning talked with friends about the Syrian family they sponsored last year, and the violence that family’s family continues to endure, or not. Syria is again in everyone’s newsfeed, but to what end? Sontag wonders whether we comfortable people see too many images of too much suffering, here and everywhere, to motivate us to care about strangers. Or at least to start to connect the dots between our ways of life and violence abroad.

Sontag is writing from and about a privileged perspective like mine, which is secure (and narcissistic) enough to use a distant tragedy as an opportunity for intellectualism. The kind of person who thinks, however briefly, when confronted with a genocide, about their self.

A genocide is never about us – not in that way, anyway – though I have kept myself in this story, and if I’m honest, at least part of the reason I showed up to the rally is because I spent a month in Burma many years ago. Nevertheless, and white-saviour-complexes aside, there are times when we can meaningfully show up for justice.

Showing up means not being overwhelmed, and here again Sontag offers wisdom: “Compassion is an unstable emotion. It needs to be translated into action, or it withers. The question is what to do with the feelings that have been aroused, the knowledge that has been communicated. People don’t become inured to what they are shown … It is passivity that dulls feeling.”

I returned to those words when I got home, in part because of conversations I had with a group of young women at the demonstration, who did not seem or sound overwhelmed by world events.

“Despite the fact that [the genocide] doesn’t directly affect us … in order to develop our awareness about the struggles that other people or communities are experiencing … we need to be able to help others and make their issues our own issues,” said Shama Saleh, one of the more talkative of the women I spoke with. Saleh is not Rohingya, but explained that her family has been directly affected by the so-called refugee crisis, and that she sees important similarities between the injustices her community and the Rohingya community continue to experience.

“We can help and make a difference, and there are other people, not just Rohingya, who are also suffering,” added Ruma Ruma, another of the women I spoke with. “And if we don’t do anything about it, then really we shouldn’t call ourselves human.”

Saleh and Ruma’s words suggested they have found strength and energy in their relationships, which they’ve built through action, by showing up and standing up for each other.

Arkani said he hoped the demonstration would raise awareness and motivate people to write their MPs about the situation, to leverage Canada’s “very good name relating to international human rights.” I also heard that we should think critically about news from abroad, and that giving money thoughtfully is more impactful than a retweet or fire emoji.

A teacher of mine once suggested that we “think of [human rights] as mules. They do not exist in nature and do not reproduce on their own, but they can exist. [And so] the essential difference between a unicorn and a mule is not that the mule exists, but that it will work.” What that teacher didn’t say is that human rights “work” because of people like Saleh and Ruma, singing in the cold, demanding and deserving your attention and concern. And because of people like Arkani, sleeping fitfully beside his buzzing phone.