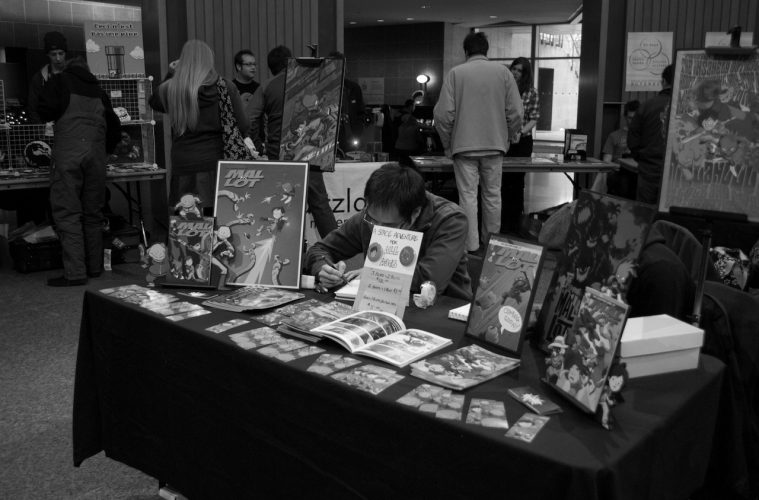 This month G33k (geek) Art Show, a two-day exhibition of arts and crafts themed around comics, sci-fi, fantasy and other alternative genres, will celebrate its third birthday in a big way.

An opening gala for the art show on November 22, 2013 at Kitchener City Hall will feature a reinvention of the popular graphic novel, Kill Shakespeare. It has been transformed for the stage using projected illustrations, circus acts and a live voice cast.

Partnering with the City of Kitchener for the second year in a row, creator Miroki Tong hopes this free event will bridge the gap between the geek community’s talent base and the general arts community. The opening night spectacular is just one way of doing it.

“I created the show because a lot of my friends who are comic artists can’t apply for grants. [Their work] isn’t seen as artwork and they can’t receive funding to complete their projects,” said Tong.

Tong wants to use the art show as a method of bridging an apparent gap between talent and work opportunities.

“One thing I realized … is that possibilities exist between talent groups within the arts community. I’m realizing there isn’t just a disconnect between arts and geek culture but within the community,” said Tong.

Another problem is the lure of opportunity just down the 401. “There’s a tendency for talent drainage because there aren’t enough opportunities here so people move to Toronto. How can we create a sustainable arts community here and a vibrant one?”

Tong also believes that emerging artists can learn from interactions not just with established artists, but also the general public.

“I’m always trying to build audience growth so that it’s not just artists visiting other artists. There are huge stereotypes surrounding geek culture but this is a perfect time to change that,” said Tong. “With blockbuster films coming out, we’re pulling in an enormous audience. The G33k Art Show tries to provide a safe and welcoming environment for people who are brand new.”

The G33k Art Show is also hosting a number of networking opportunities including a cocktail hour before the opening gala for people to get together and talk about their craft. There will also be an after party and a Sunday brunch at the Walper Hotel.

“The G33k Art Show isn’t so giant, so artists will actually be able to talk with visitors and build relationships,” said Tong. “The whole point of the show is to create breakthrough opportunities and further the growth of artists.”

Among the artists attending are a number of industry professionals, including Wilfrid Laurier University alumnus Anthony Del Col, writer and co-creator of Kill Shakespeare.

Kill Shakespeare is “an action-adventure story that pits all of Shakespeare’s greatest heroes against his most menacing villains in a quest to discover and kill – or save – a mysterious wizard by the name of William Shakespeare.”

It has produced three comic volumes, a mobile game and a board game. There’s also talk of licensing the property for movies or television.

The success of Kill Shakespeare makes Del Col a great person to connect with artists in K-W.

Del Col agrees that the community has a role to play in the development of artists.

“It’s essential to build a network and fan base, and the most accessible groups to draw upon are local communities,” said Del Col. “As more artists develop ties with communities, it allows for a real hub to grow and the artists to flourish.”

He also believe there’s a great arts community to be found locally. “K-W is still very much a tech-centric city but I think there’s potential to grow the arts scene,” said Del Col.

Kill Shakespeare co-creator Conor McCreery agrees. “I was a theatre minor as well as a business major at Laurier, and we did a lot of fun things with the community. I think Kitchener-Waterloo loves culture.”

Challenging as it may be for new artists to break through in what seems to be a saturated market, there is hope.

Del Col will walk attendees of his G33k Art Show workshop through how to pitch ideas, deal with publishers and push into the marketplace while sharing secrets learned in the creation and publishing of Kill Shakespeare.

Tong hopes the third G33k Art Show can continue to help foster a conversation about the importance of community. “Geek can stem so far. Fantasy can encompass so much. It’s all about creating those intersections.”