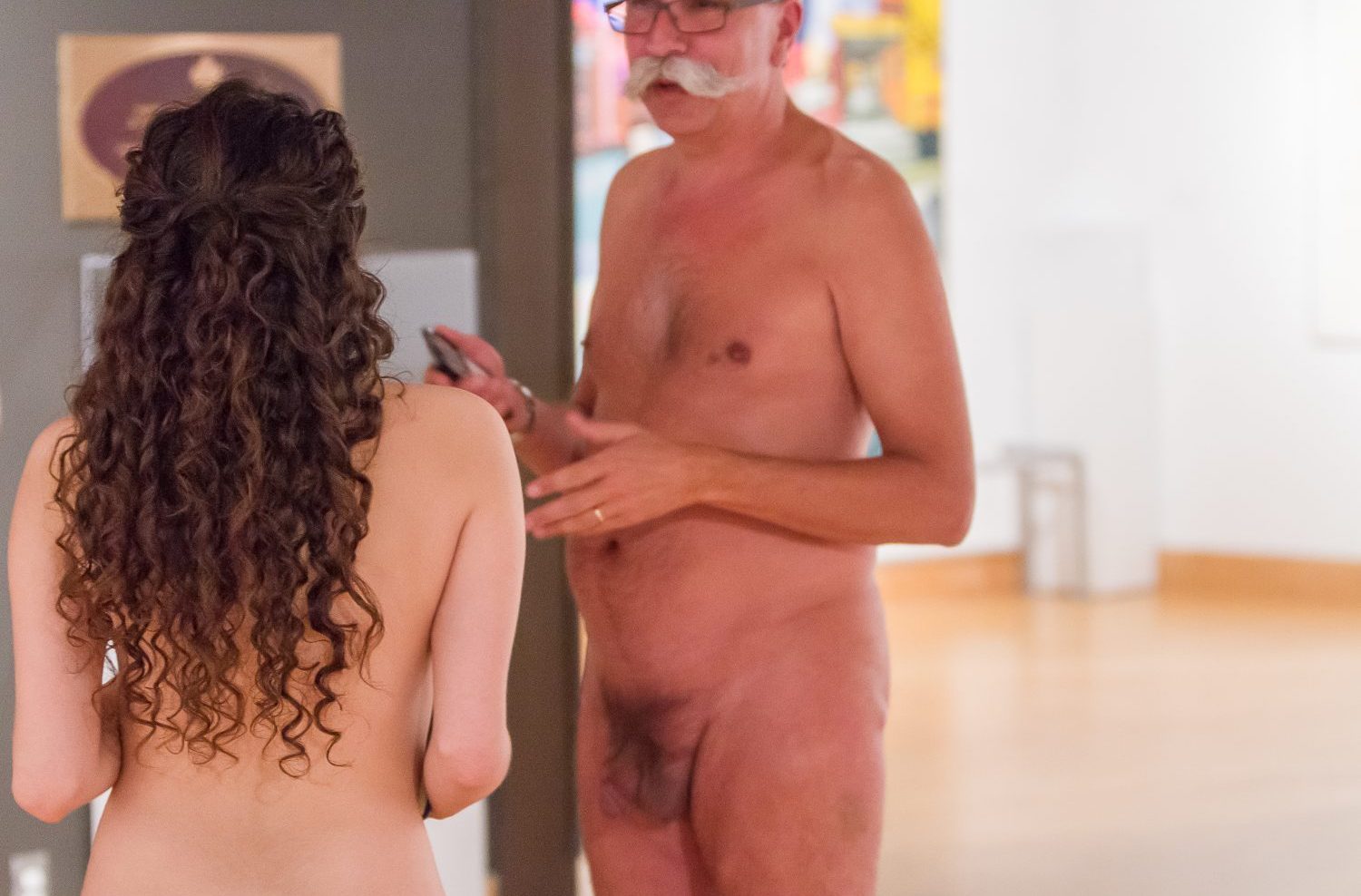 Her nipples, hanging nearer her elbows than chin are hidden under her arms. The long lines creating a cavern between her breasts guide my eyes around her full figure, across her pale flesh and back up to her face. Proud. Aback. And like she knows something I don’t. The card beside the frame reads “Margaret Facing.”

“Who is the one on display here, anyway?” The thought crosses my mind as quickly as goose bumps peak from my skin, contrasting the texture of the silky photograph in question and Margaret’s unwavering confidence that seems cemented in the portrait.

THEMUSEUM’s gallery, though filled with fifty or so wandering bodies is chilly on March 27 and doesn’t inspire comfortable, smooth skin, or relaxed hairs on the back of my neck – or perhaps that is a product of my own discomfort as I stand naked in a sea of strangers’ flesh. 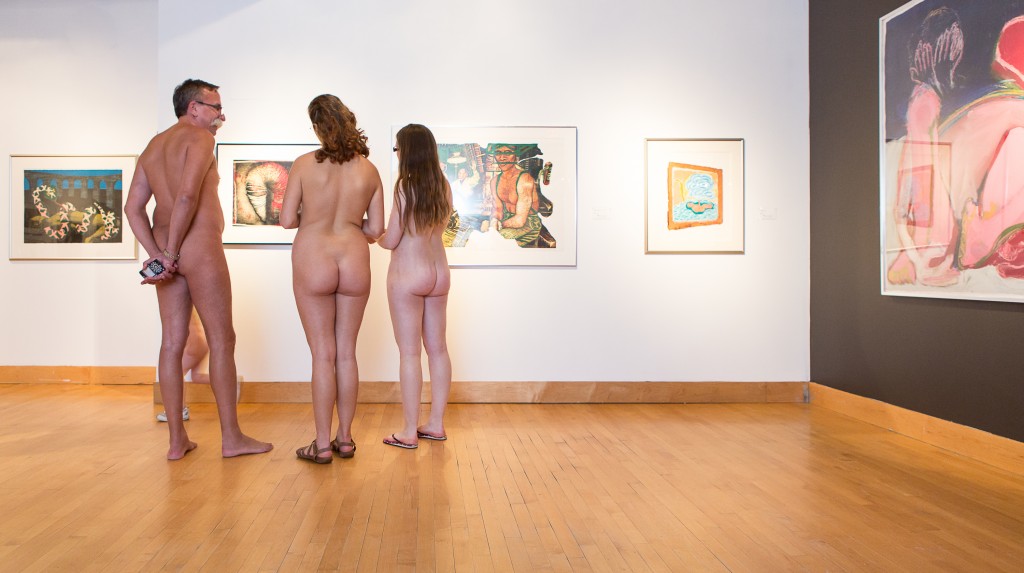 The exhibit, aptly named “Getting Naked,” is part of a larger series at THEMUSEUM that includes a variety of programming, panels and the evening I am immersed in – a walk through the gallery where participants of all ages are taking in the nudes in exactly that form.

The downtown Kitchener, multi-room gallery houses over 100 never-shown-together pieces from the Canadian Art Bank and is curated by Virginia Eichhorn. The works, categorized broadly as “nude, naked or unclothed,” include everything from waist-high, wooden wangs to realist, oil paintings, cherubic figures and abstract renderings of the human form.

But unlike the forms painted, printed, scrawled and molded in THEMUSEUM gallery, I was not shipped here. I am not stapled to a canvas frame and hanging on the wall. I was offered the choice to attend, to strip, to partake. A choice that did not come without incredible thought.

“Clothing can’t be optional,” says Stéphane Deschênes, owner of Bare Oaks Family Naturist Park, explaining some philosophy behind naturism and the evening’s event. “With a mix of clothing and not, one person is immediately exhibitionist, the other, voyeuristic.”

Wading through the crowd of the drifting exposed, my earlier concerns about what to do with my pubic hair seem trivial. In most ways, my new, naked acquaintances were all different. Nipples come in more sizes than I knew and pubic regions range from untouched meadows to freshly-waxed – albeit irritated – areas, the tiny, pink bumps left behind indicative, perhaps of anxieties similar my own. Still, I look back and forth between the bodies in the room and my own, goose bumps continuing to rise and fall on the skin I over-exfoliated before leaving my house.

Deschênes, clad only in a watch, glasses and a hefty moustache, the kind that coils at the ends, is standing about a foot from me, in what appears to be utter comfort, even nonchalance as I fervently take notes in my only covering – a cobalt blue notebook – that offers far more juxtaposition to the neutrality of white walls and the spectrum of flesh-tones than I liked. 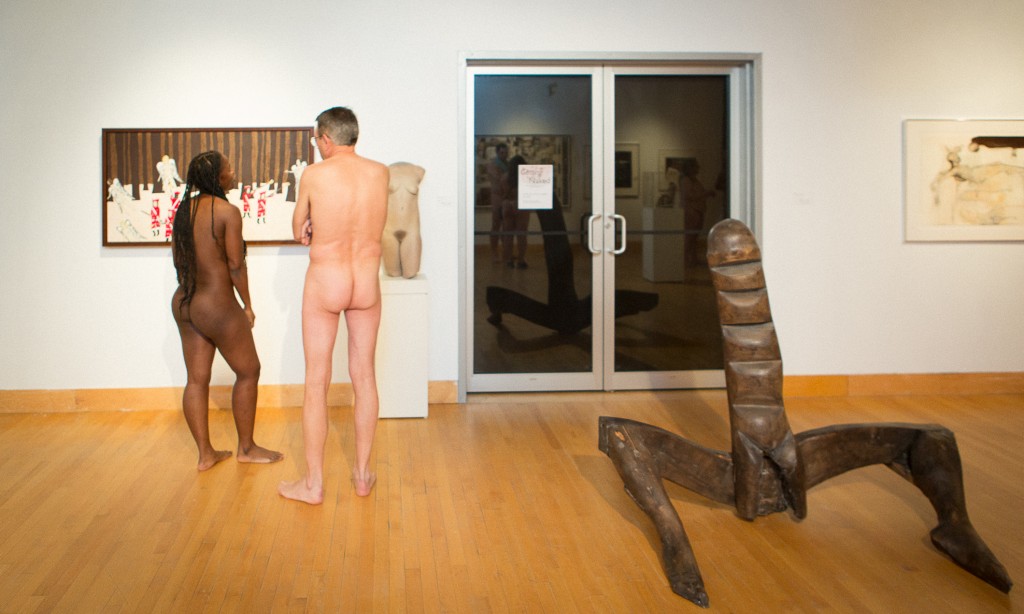 I am not so subtly using the pages to shield myself. Remembering the portrait of Margaret, I feel as if a breast barely seems naked if the nipple is hidden, a grandiose and perhaps arbitrary conclusion from such a small part of the body.

This fear of public nudity extends beyond my own thoughts and to society at large. The art that makes up “Getting Naked” was selected for its taboo – painted pariahs, untouchable sculptures. A number of pieces were rejected from other exhibits, and leading up to the Kitchener debut, various media outlets made editorial decisions to omit the accompanying images in anticipation of an outraged audience for whom nudity may conjure images of sex, promiscuity and immorality.

“We’re free from the over-sexualization of the body when nudity is the norm,” says Deschênes. We’re standing in a group of naturists and newbies alike; a further distance is kept between people than in a clothed conversation, a social code that takes some time to acclimate to. This distance makes me very aware that this is the first time I’ve encountered any level of nudity or nakedness as an adult without sexuality involved.

My preconceptions of the event are steeped in gender, insecurities about my own and questions about the other. Where will the gaze of men in the room stop? How will I interview men following the release of this story? Will people get erections? Before I could dwell on the question, Deschênes interjects; informing me that it’s the most common question asked about naturist communities, and one of the least common situations. 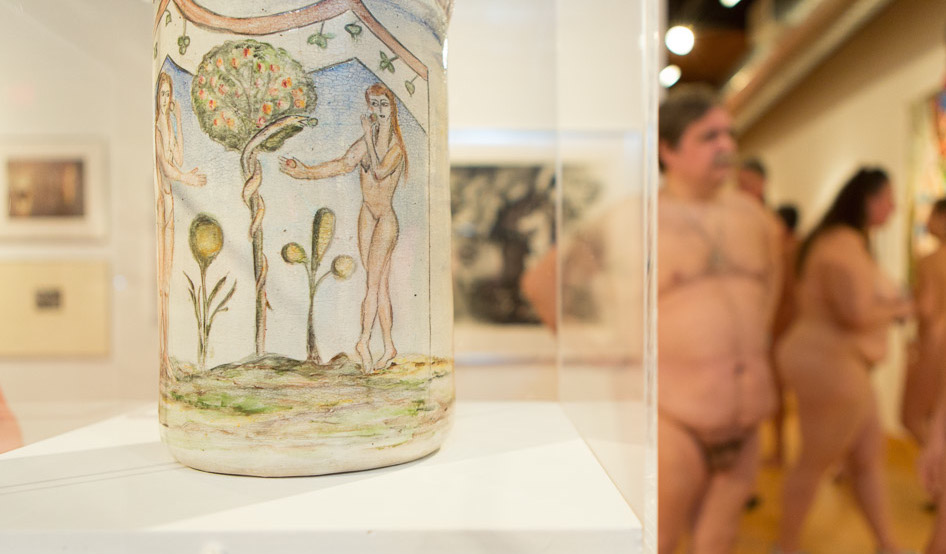 “In this environment, you can look, but you need not stare,” he says. “The removal of clothing is to equalize people, not put them under scrutiny.”

Scrutiny, however, is often the norm.

“I remember the first time I told my wife,” says Gary Aldersson, a regular at Bare Oaks. “She still doesn’t come to the park.”

While many naturists walk the gallery, first-timers meander through the art, too. Aware of someone standing beside me, considering the same, black and white line-drawn body parallel my own, I turn to consider them instead. Look, but don’t stare: Deschênes’s advice and arguably a natural reaction. A quick glance reveals that she is colleague.

Encountering strangers in the buff is a hurdle I prepared for. But a colleague? This is my personal hell, and based on her widened eyes, not her ideal either. Our faces exchange shock before morphing to a giggle. On the count of three we raise our tightly crossed arms, completely open to the other’s gaze. We are in this together, and like the rest of our art-consuming compadres, equally as vulnerable.

With each interview on personal anxieties about the body, with each penned phrase of a position on nudity, experience with naturism or lack thereof, I feel stripped of not just clothing, but of my own apprehensions and of cultural signifiers. 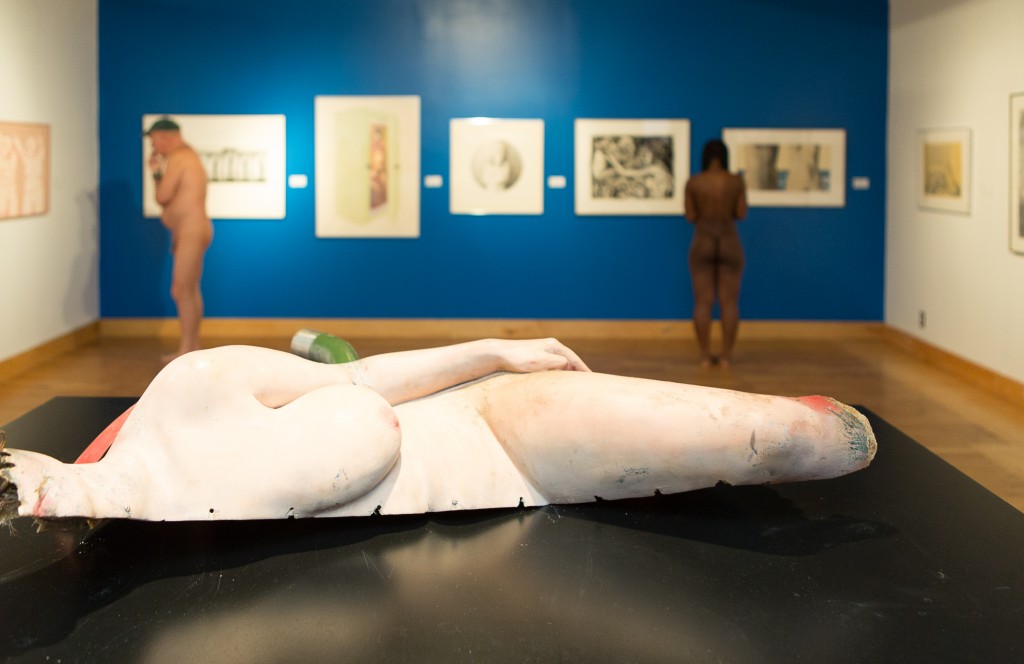 Of course, not everything is shed with apparel. One can note skin colour in a room nearly as white-washed as the walls, and gender in a predominantly male attendance. I still see the wrinkles and stretch marks that connote lived experience. I still see scars that imply medical past. I still imagine lifestyles that may accompany the toned thighs, or soft bellies, strong arms and waning backs. But a level of ambiguity in identity becomes apparent, too. Certain preconceptions of income or career, social status or style blur in the absence of adornment. While baring all, I gain certain anonymities, too.

After three hours of unclothed conversation among art of a similar aesthetic, I return, in a quiet moment to the photograph of that proud woman, whose breasts, stretched by time, are covered by her folded arms. My eyes move beyond her draping skin this time, to the material that swathes her waist and meets the fl oor. Here lays a fur-laden, clawed portion of the image I had all but disregarded earlier. At the end of her human legs are large, grotesque, hairy, bear-like paws.

It isn’t until weeks later through conversations with colleagues that I consider how Margaret, my framed counterpart has the feet of a beast, and just like one, she sits on the wall as people pass and stare. Speculate. Scoff at her figure.

My own expression seems closer to hers than it did one month previous, when I shivered in my own nudity. Her countenance of knowing seems to have dissolved. I am in on her secret.

“Who is on display here, anyway?” I ask Margaret silently.