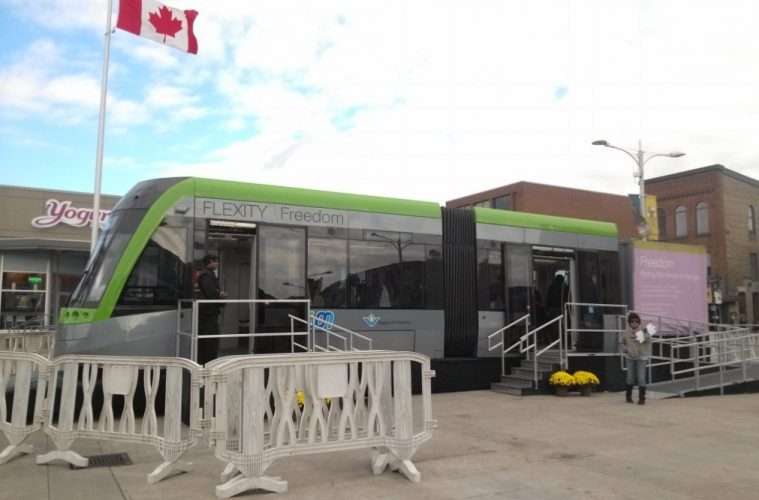 Last weekend the Region of Waterloo capitalized on the Oktoberfest hoopla by hosting IONtoberfest in the uptown Waterloo square. The event wasn’t so much about eating schnitzel as it was about promoting the proposed Light Rail Transit (LRT) system the city council approved a few years back. They plonked a hefty Bombardier Flexity Freedom train car in the square, set up an information booth, and let the public ask questions and check out the goods.

The folks working the info booth were juiced to tell me all about the new system, how it will work, and why it is so great. They were handing out the kind of flyers that have a lot of writing on them but really don’t tell you much. What really nailed down the feeling of being highly encouraged to love something were the stickers they were pushing on people to wear, and the cardboard toy mock-ups of the train they were handing out.

Though annoyed by the execution, I can see why they are approaching it this way. People fear change and an LRT system taking over the tri-cities is a pretty huge endeavour that will probably inconvenience more than a few residents as they get underway. Plus, as one eager beaver worker informed me – they only have funding so far for “Stage 1” and are relying on its success to complete the entire LRT system. Fair enough.

Now don’t get me wrong I am excited to see this thing happen. When I heard about the LRT proposal back in 2011, and there were all kinds of arguments and complications with getting approval, I was definitely crossing my fingers for a go. In my humble opinion, the Region has shown admirable foresight towards the future of this area but putting thought into urban sprawl and environmentally sound solutions. It doesn’t take a genius to see that St. Jacobs, Waterloo, Kitchener, Cambridge, and even Guelph, are slowly melting into one big city.

What also impresses me about all this is that they signed a contract with Bombardier and the trains that Waterloo will receive are coming from Thunder Bay. In a world where everything is outsourced to countries that will do it for cheaper, the Region should get three cheers for employing a fully Canadian company.

Stage 1 should be up and running by the end of next year and involves an adapted Bus Rapid Transit (aBRT) from Fairview Park Mall to the Ainslie St. Terminal in Cambridge. Next up is the LRT system that will either involve putting in rails or using existing ones from Conestoga Mall to Fairview Park, with multiple stops along the way. Stage 2 is the switchover of the aBRT to an LRT system. Once complete it will feature a seamless 37 kilometer line with 23 stops. It’s also designed to work in conjunction with the existing GRT bus system, so much like a TTC ticket that allows you to travel by bus, subway, or streetcar.

I love that this transit line will run right down King Street. Anyone with a car knows that trying to get from downtown Kitchener to uptown Waterloo is torturous. I’d almost rather go to the dentist than battle the city centre traffic… Almost.

But the big question is: will people use it? The pessimist in me says people love their cars too much to make a dedicated switch to public transit. But the optimist reminds me that the economy is down, everyone is pinching pennies and notwithstanding that, environmental consciousness will prevail. As I said earlier – I personally loathe the traffic congestion, but I never use public transit. Yes, I’ll admit, I’m one of those hypocritical hippies that doesn’t walk the talk. I can’t deny that I love the convenience and independence of my own vehicle on my own schedule. Did the IONtoberfest positive reinforcement message sink in? Will the flashy new ION Rapid Transit System convert me to a full-time environmentally conscious rider?

I guess we’ll just have to wait and see.

Go here for artist’s conception of what Uptown Waterloo would look like after LRT construction.
See the proposed route plans.